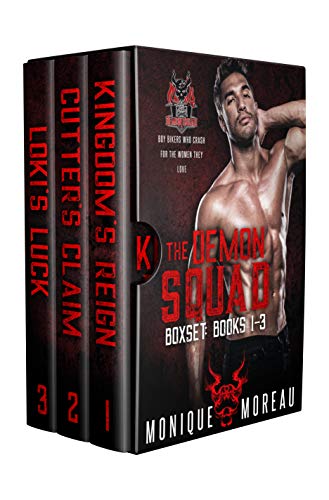 Looking to ride in the fast lane?

Check out the bad boy bikers of the of the Demon Squad MC. They're sexy, possessive alphas who will do anything to get the sassy women they fall for. Beware! It's a steamy ride.

A grieving biker. A love jaded attorney. Can they heal each other's wounds?

Since the death of his patch brother, Kingdom has felt nothing but rage and loss. Until, he meets Sage on a trip to a tattoo shop to get fresh ink for his fallen brother. She's sexy. Brilliant. And exactly the kind of challenge that makes him ache. If asked whether he deserves her, Kingdom's straight-up answer would be, hell no. But, nothing will stop him from taking what's his. Not even her.

Being a no-nonsense defense attorney, the second Sage caught her fiancé cheating she'd sworn off men. While breaking that rule for a tatted up member of an MC seems like a monumentally bad idea, she can't fight her attraction to Kingdom. When he invites her on a ride, she finds herself wanting so much more. Sage yearns to indulge in one of the sexiest and most dangerous men she's met, but fears risking her battered heart.

Can the unlikely pair help each other move on from the wounds of the past? Or will club tensions with a rival MC find a way to use their weaknesses against them?

Who needs more than bikes and willing women? Not Cutter. Until he meets Greta, a former biker princess who turned her back on club life. She challenges him every step of the way, and Cutter doesn't tolerate disobedience.

Greta lives by one rule: No Bikers. She didn't escape her father's MC and build a new life for herself just to be brought down by a dirty biker. Not even a hot, domineering man like Cutter could change her mind.

Cutter is ready to play dirty. In their battle of wills, he begins to master her deepest desires. Can she find the inner strength to submit to him? Meanwhile, a danger from the past lurks in the shadows—ready to pounce.

A damaged biker. A younger woman. An exchange of sex for secrets.

To punish himself for his baby brother's death, Loki is determined to live a life of abstinence—no partying, no women, no nothing. He stays focused by throwing himself into managing the MC's new gym. But when he's roped into teaching a self-defense class, the supervisor threatens his self-control. The annoying little pixie loves butting into his business, but Loki's gaze keeps returning to her luscious curves. Again and again.

As a social worker, Abby is called to help troubled souls and she's never met anyone more broken than Loki. Determined to heal him, she offers him a deal: he can have her—any way he wants—in exchange for stories from his past. Whatever it takes for her to uncover the truth, she's game.

When Loki's enemies hurt Abby to get to him, the biker revs up for a long-overdue fight. He'll have to convince Abby she's safer by his side or risk losing her completely.