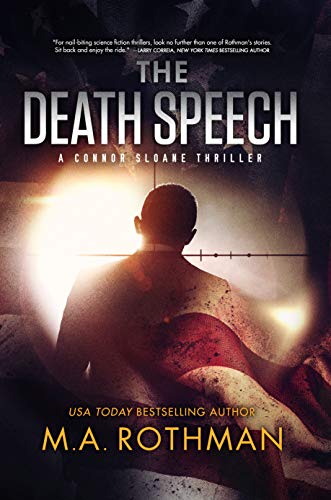 The Death Speech: A Suspense Thriller

From a USA Today bestselling author:  It's election season in DC and Connor Sloane is on the hunt for an assassin who has their crosshairs on the President of the United States. If he can’t identify and stop the assassin, the president’s next speech may very well be his last.

"If it's actionable, we act." That's the motto of the clandestine government organization that Connor Sloane works for, and he's called into action when an assassin attempts to remove several of Europe's political leaders.

Things take an unexpected turn when the president's brother, a nuclear weapons expert, is reported missing somewhere in central Africa.

Connor's attention is split between two continents when intelligence comes in indicating that the attacks in Europe were only a practice run for the real target, the President of the United States.

In the meantime, it’s re-election season in the US and the DC political machine is keeping the president unaware of the danger he’s in. Connor scrambles to identify the assassin, who may be closer to the president than anyone knows.

If he can’t identify and stop the assassin, the president’s next speech may very well be his last.