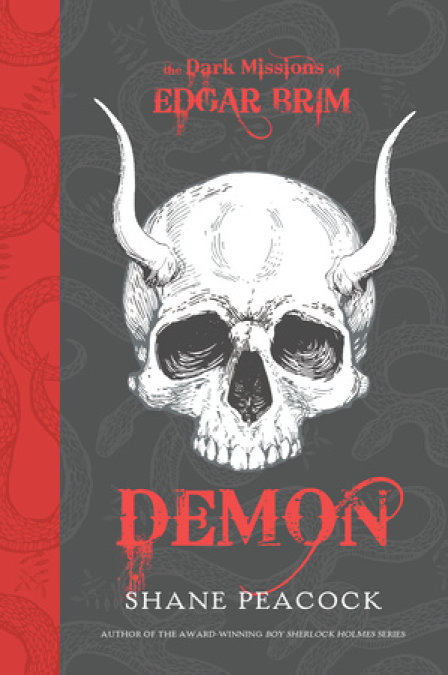 The third and final book in a gripping Gothic YA trilogy, featuring monsters from classic literary tales, secret societies and the fight between good and evil.

Having tracked the monstrous Godwin to the Arctic and barely escaped with their lives, Edgar Brim and his friends return to London. Edgar continues his work at London Hospital, now under the tutelage of the Chairman, the affluent and charming Sir Andrew Lawrence. Edgar's night terrors begin increasing in intensity, and soon the group becomes aware of a new threat: they are being stalked by a new creature, an invisible assailant they are convinced is the Devil himself. In the hope of curing his affliction and combating his fears, Edgar confides in Dr. Berenice, a renowned yet enigmatic alienist who may somehow be involved in the mystery. Yet when the group suffers a fatal attack and a long-dead ally makes an appearance, Edgar begins questioning his own sanity. Can he and his friends truly defeat the most powerful villain imaginable if they can't even trust their own minds?

Far away from home, from comfort and sanity, up in the arctic mountains of Spitsbergen Island, the sound vibrates in the frigid air, comes racing toward the sea and enters Edgar’s soul. It is a cry of anguish and it terrifies him. He stands on the little ship amidst the human blood and severed limbs and smashed skulls that the great whale has left in its wake, unable to move. Lucy and Jonathan are on the shore just an arrow shot away, motionless too. Tiger lies beneath them on the hard ground, awfully still.
“That sounds like the devil,” whispers the wounded captain, still on all fours.
“Bring her,” Edgar calls to Jonathan as he motions toward Tiger, a tear rolling down his cheek.
Though his friend is a young man with arms like a strongman, he cannot do it. Instead, he drops to his knees and buries his head in his hands. Lucy bends down and, summoning a strength beyond her physical powers, lifts her fallen companion and then staggers toward the boat with her, Tiger’s limbs limp and extending toward the rocks. Edgar gets to them in an instant, reaches over the railing, and takes his dearest friend from Lucy, shocked to feel how light she is. He stares down at her twice-broken nose and pale face, framed by short, raven-black hair. She is still so beautiful, even in death. Tiger. The indefatigable, the unconquerable, the inimitable Tiger, laid low by the monster they had pursued to this godforsaken place. The tilted boat is jammed against the high, rocky shore. Lucy clambers up and onto it as Edgar walks with Tiger in his arms across the deck, holding her close. He puts his forehead to hers and then sets her down, away from the blood. He presses his finger to the jugular vein on her neck and tries to tell himself that he feels a very slight pulse.
The cry echoes across Spitsbergen again and the captain cowers.
“Do you have binoculars?” asks Edgar in a monotone.
The captain points to them, their straps somehow still holding fast to a hook on a mast, but their lenses smashed. Edgar takes the binoculars in both hands and points them upward into the mountains. The cry comes one more time. Edgar stares through the broken glass, seeing a thousand images, but he focuses on one: a distant figure, only slightly less white than the snow. It is holding its face toward the sky as if it has just let out a howl. Below it lies the broken body of another polar bear, the one the monster had killed with his bare hands less than an hour before. Did the horrific cry come from this looming animal, or from something else?