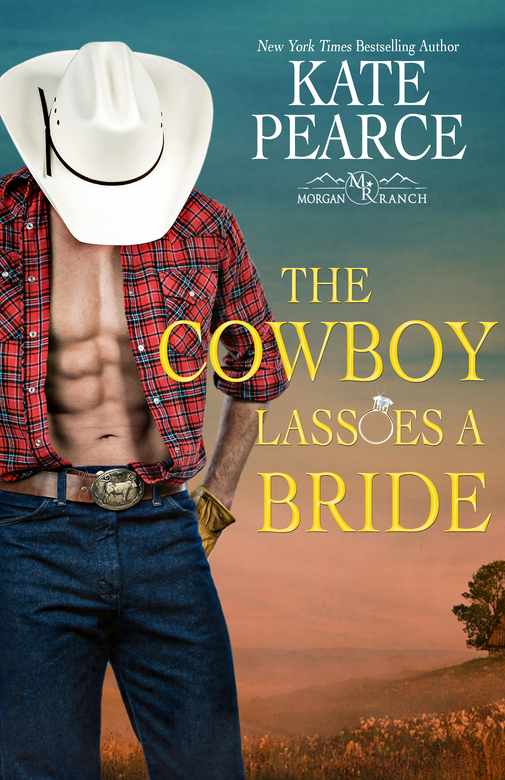 New York Times bestselling author Kate Pearce knows how to navigate the rugged terrain of a cowboy’s heart in this witty, romantic story where everything goes spectacularly wrong—for a love that’s so right . . .

Between a hen night that goes terribly awry and a missing wedding dress, a bride-to-be wonders if her plan to marry her longtime bad boy cowboy beau is doomed—and he wonders if his beloved fiancée is purposely avoiding the altar. Will love prevail? . . .

“Captures the spirit of the West.”
—Booklist on The Maverick Cowboy

*Previously appeared in the anthology Marrying My Cowboy

“Samantha Bernadette Kelly, you come right back here!” HW Morgan bellowed at her retreating form. “I’m talking to you!”

Sam took a quick look over her shoulder as she booked it to the barn. Her beloved blond cowboy was standing in the center of the drive in front of the ranch house, and he definitely wasn’t happy. If she could reach her horse, she could get away from him for a few hours and let him cool off.

Not that he’d do a thing to her, but she wasn’t ready to answer his question yet. She needed time to think. She hurried into the barn, where she’d already saddled Dollar, and went into the stall.

“Where exactly do you think you’re going, Sam?”

She almost squeaked as HW spoke from behind her. He must have moved really fast and was now regarding her over the half door of the stall. He wasn’t even breathing hard. She peered at him over Dollar’s back with renewed respect.

“Right now? When I just went down on one knee, and asked you to marry me?” HW asked.

She held up her hand. “I need to think about it, okay? I’m not saying no. I’m just . . . having a hard time getting my head around the idea.”

“Because last time you got engaged the marriage was called off?” HW was trying to be reasonable, and she loved him even more for the effort. “Okay, I get that.”

“I do love you, though.” Sam added reassuringly.

He stepped back, his hands held high. “Okay. I’ll get out of your hair then.”

He walked away leaving Sam clutching Dollar’s reins and staring after him. She’d expected him to talk her out of it and argue it through until they reached an agreement like they always did. But maybe she was asking too much this time?

She patted the horse and squeezed out of the stall behind his rump. “Don’t go anywhere, I’ll be back.”

Dollar snorted as if he didn’t believe her and whisked his tail. She carefully locked the door and went looking for HW. It didn’t take her long to find him. He’d gone up into the hayloft and was sitting on a bale of straw, blond head down, hands twisted in front of him staring out over the ranch his family had owned for 150 years.

Her heart actually hurt at the sight of his dejection. Sam bit her lip and approached him, taking the seat next to him on the prickly bale.

“I’m sorry.” Sam put her hand on his denim-clad thigh. “I panicked.”

He didn’t speak, but he managed a nod, so Sam pressed on. “I’m not afraid of loving you, I’m just scared that the moment I commit everything will go wrong. And I know you’re nothing like that jerk who two-timed me, and that your word means something, but I guess I’m gun-shy.”

“Please go on.” He waved a hand at her. “You’re winning my argument for me.”

“Okay to what, exactly?” HW turned to face her, his expression wary. “Us being on the same page, or okay to marrying me?”

“Both.” Sam stared into his stunned hazel eyes and flapped a hand in front of her face. “Oh God. I think I might pass out.”

“Well, that’s hardly reassuring.” His smile warmed her heart as he dumped her in his lap and wrapped his arms around her. “I promise I won’t back out, let you down, or screw this up.”

“I’m the one most likely to do all of those things,” Sam protested as she kissed him. “But it’s going to have to be a quick, simple ceremony, and none of that fancy stuff, okay?”

“I’d marry you in a barn, you know that.” He hesitated. “Do you want to do it here at the ranch, or would you rather elope?”

“Here.” Sam kissed his nose. “And soon, before I lose my nerve.”

HW stood up, brought her to her feet, and with a whoop, swung her around in a circle, laughing like a fool.

“It’s a good job I love you so much, Sam Kelly, because your enthusiasm is killing me.”

She thumped his shoulder until he set her carefully back down on her feet. “Now what’s wrong?” HW sighed.

“The dying part.” Sam cupped his chin as his smile disappeared. “I can’t . . . deal with that again.” Her former fiancé had ditched her just before their wedding and been blown up in the same military convoy where she had lost her foot.

HW winced. “Sorry, I wasn’t thinking.” He kissed her very thoroughly and stared deeply into her eyes. “I’m not going to die on you. I promise.”

“You can’t promise that,” Sam whispered.

“Then I promise to do my best to stay alive until we’re celebrating fifty-plus years of marriage.”

“Okay. That sounds awesome.” Sam nodded. “I’ll hold you to that.”

HW took her hand. “Then let’s unsaddle Dollar and break the news to the family.”

“This is awesome!” Nancy, the bartender at the Red Dragon, thumped Sam on the back making her wheeze. Sam had gone to the only bar in Morgantown to celebrate the news of her upcoming wedding with a few of her girlfriends. “Leave all the details of your bachelorette night to me, okay?”

Dubiously, Sam studied her purple-haired, pierced and tattooed companion. “You don’t have to do anything too radical, okay?”

“Don’t worry.” Actually, Nancy’s confidence was making Sam worry a lot. “I know all the best bars and places to take you. We’ll start in Bridgeport and work our way back here to Morgantown.”

“Sounds like fun,” January Morgan, Sam’s soon to be sister-in-law, chimed in. “But I don’t think I’ll be able to make it with the baby.”

“Leave the baby with Chase. He won’t mind,” Nancy encouraged her. “He dotes on that kid.”

“It’s his kid, of course he dotes on him.” January smiled. “He’s a fantastic father.”

“I know, and who would’ve thought that a few years ago? He was such a nerd at school.” She paused. “You could bring the baby with you? He might enjoy a night out.”

“I think I’ll leave him with Chase, actually,” January said firmly. “He’s a little too young to be out on the town.”

“Well, I’ll definitely come,” Yvonne from the coffee shop piped up. “Rio’s in Vegas, so I’m all alone. If you make it a Friday or Saturday, I won’t have to get up too early in the morning to start baking.”

“I know Marley and Jenna would love a night out,” January added enthusiastically, “And Sonali, Lizzie, and Daisy—”

Nancy nudged January. “You’re making Sam nervous. How about we talk about this when she’s not around? We don’t want her changing her mind or anything.”

“Sure!” January agreed. “We’re having the wedding the week after next at the ranch. We had a cancellation on the Sunday, so the timing was perfect, wasn’t it, Sam?”

Sam nodded, her mind still wrestling with the speed at which everything was coming together. She’d told HW she wanted to get married quickly, but hadn’t counted on the entire Morgan family mobilizing into action, and actually making it happen within two weeks. She focused on HW, her demanding, gorgeous man, and her heart rate slowed down again. He was worth it. She knew he was.

Avery, who was engaged to HW’s identical twin brother, Ry, touched Sam’s sleeve. “It’s all going to be okay. I’ll make sure nothing gets out of hand, and we get you back safely for the wedding.”

“Thanks, Avery.” Sam smiled at her friend. “You’re probably the most sensible person I know around here.”

“Sensible?” Nancy said, one eyebrow raised. “You do know Avery was once a competitive barrel racer?”

“Of course I do.” Sam grinned at her friends. “Which says a lot about the rest of you, doesn’t it?”

No one disputed her assumption, and they went back to toasting her health, and whispering to one another when they thought she wasn’t listening. At nine o’clock, Sam rose to her feet.

“I got up at five this morning to help Roy with the pigs,” Sam said. “He says I’m the only person on the ranch apart from Jenna who understands them.”

“I’ve got some theories about that, but I’m not going to share them right now.” Nancy blew her a kiss. “Off you go, bride-to-be, and I’ll speak to you tomorrow.”

Sam walked back through the quiet streets of the small town to her apartment above the health center. HW hadn’t liked it when she’d moved out of the ranch guest cabin, but had eventually conceded that he had to do a lot less creeping around avoiding his grandma Ruth. Sam enjoyed the drive up to the ranch every morning where she oversaw the equine therapy program with HW, but she also appreciated being able to come home by herself occasionally.

She and HW had what some might call a tempestuous relationship. They were both outspoken, stubborn, and liked to get their point across. After almost two years of dating and work. . .