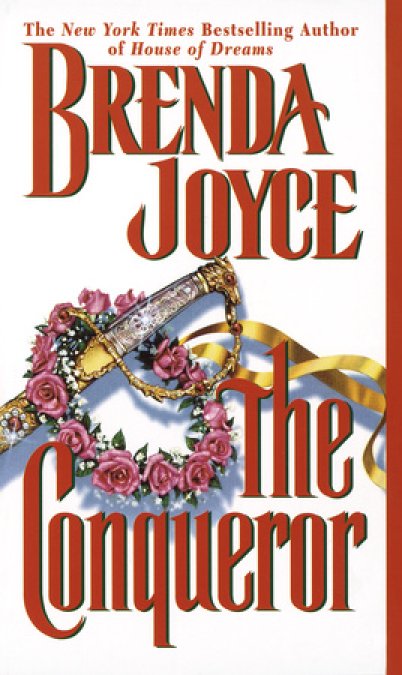 Like a pagan god, Rolfe the Relentless rode into Castle Aelfgar to claim it as his prize--and Lady Alice as his bride.  Lauded for his bravery in France, in England he was the hated enemy.  Once ensconced in his new domain, Rolfe became determined to tame the Saxon beauty Ceidre, Alice's illegitimate sister, whose spirit and sensuality make him risk treason to have her--not Lady Alice--in his bed...

Mysterious and seductive, she was no lady but a spy for the rebel cause of her noble half brothers.  Refusing to bow to this arrogant warrior who ignited her forbidden passion, Ceidre was swept into a dangerous liaison tied to the fate of England and kings.  Yet with his kisses on her lips, his skillful hands on her body, she would have to struggle not to surrender to... The Conqueror.

She slowly sat up, clutching her torn gown together. She fixed him with a stare of intense hatred.

His gaze, cold and vividly blue, held hers. His look darkened and warred with hers. A nerve in his jaw ticked. She could feel his anger now and knew it was directed at her. For what? For her insolence in hating him? For what he had been denied--the rape of her body? Or because he knew who she was?

He moved. He came to her swiftly. Ceidre started to shrink away, then caught herself and held her ground, raising her chin with defiance. She could feel the thick, unnatural beat of her heart, the cloying terror. He could rape her and then beat her before killing her, but she would not show fear of this man. But he had seen her initial reaction, and this too displeased him. His anger was a visible thing, darkening his eyes again, and his face.

And then his expression changed. He stopped abruptly, staring.

Ceidre had seen many people look at her the same way, when they first noticed her eye. Surprise, usually, was the initial reaction, then puzzlement, then comprehension and horror. Behind him, she saw Guy draw back. "I'd heard it but I didn't believe it," he whispered nervously, unable to tear his glance from Ceidre. "'Tis the evil eye."

Rolfe's gaze was riveted upon hers. Ceidre hated the deformity that had haunted her her entire life: Her right eye sometimes wandered away at will. It was not a frequent occurrence; usually it happened only when she was extremely tired, and was only noticeable by those in close proximity. People thought she could gaze in two opposite directions at once--'twasn't true. Strangers who did notice this defect crossed themselves for protection when they saw her "evil" eye and kept well away from her.  It had been that way her entire life, since she was a tiny toddler in swaddling. The villagers at Aelfgar, her own people, many her own kin on her mother's side, were long used to her, knew she wasn't evil.  Yet that she could heal the sick as her granny did only confirmed their belief that she was a witch.  So even her kin were overly aware of her, in awe.  Only her brothers, well used to her, seemed entirely indifferent, and Ceidre had long since said prayers of thanks for this blessing.  Yet even they were not beyond begging a boon--Morcar had once asked her to bewitch a lass who had been leading him on a merry chase! Now Ceidre flushed, hating this deformity more than she ever had in her entire life--hating being exposed before this man.

His cool blue gaze swept her features one by one returning finally to her eye. Then he spoke. "She is no witch. She is flesh and blood. That is enough."

"My lord," Guy protested nervously. "Be careful." He was standing above her, his sword sheathed, hands curled into angry fists on his lean hips. "Are you the lady Alice?"

She blinked in surprise.  And then she understood his misconception; he was confusing her with her half sister.  Ceidre was no fool.  Alice was not a by-blow. Being nobly born, she was of more import than Ceidre herself was. Depending, of course, on circumstance--on which game of war this Norman pig chose to play. For now she would go along with the false belief, to save herself from a certain rape, or worse.  Ceidre said, "Yes."

Her answer seemed to please him, for suddenly he smiled.  Ceidre was momentarily stunned.  Not by his response, or by the fact that he actually could smile.  She remembered how he had looked charging after her on his destrier, like a golden pagan god.  How he had looked, sitting there so impassively as she had pleaded with him to spare the corn.  Now she realized he was devastatingly handsome with his short golden curls, his blue eyes, straight white even teeth, and features that were sensually, ruthlessly chiseled.  She stared at his proudly sculpted face, unable to stop herself.

"What do you think, Guy?" He was grinning, not tearing his gaze from her as he asked his knight the question.  For a moment their gazes held.

Ceidre didn't like the possessive way the Norman's eyes were stroking her body, and her anger returned in full force.  Anger and something else, uneasiness. She started to get up, and he was there.  His touch infuriated her, and she wrenched away; she did not need his help, would never need it.  But why wasn't he afraid of her now that he knew the truth? Instead, he was angry at her response, but he was obviously a man of discipline for he held himself carefully in check.  Gone, though, was the beautiful smile.  "My lady," he said stiffly.  "What are you doing away from Aelfgar? Dressed as you are? It is not safe in these times."

He would show concern for her safety? It was a mockery! "And what affair is it of yours? Am I your prisoner?" she demanded, chin high, eyes flashing.  Yet inside she was quaking.

His own jaw came up.  His mouth was tightly compressed.  A few moments passed before he spoke--before, Ceidre thought, he trusted himself to speak.  "You are not my prisoner, my lady.  I will escort you
back to Aelfgar to ensure no harm comes to your person."

"I don't need an escort," Ceidre managed.  "'Tis not far, just six kilometers or so."

"Have you never learned respect for your men?"

He stared.  "I will escort you to Aelfgar.  We will camp here for the night."

"You are keeping me prisoner!" Ceidre cried

"You are my guest," he said, very firmly. "And Guy will see to your welfare." Rolfe gave Guy a hard look. "But you still have not answered my question."

She was a prisoner and she knew it, a prisoner of her hated enemy, maybe even one of those who, for all she new, had captured, hurt, or killed her brothers! "Spying," she said, oh-so-sweetly.  "Whatever else would I be doing so far afield?"

"Do not test my charity of spirit," he breathed.

"I am good with herbs."  She glared at him, remembering the sow. "I came to heal the sow."

Her chin lifted.  Was he dumb or deaf? Both, of course, being the Norman pig he was and no pun intended. "Yes, she said, through gritted teeth. After all, I am a witch--or have you already forgotten?" His lips might have curled up in the slightest of smiles.  "You did not cast your spell through the air?" he asked.

Ceidre gritted--now he was making fun of her. "She was a prized breeder and suffering with congestion. Newly bred too. Of course, it no longer matters."

"You traveled six kilometers to heal a sow?"

Rolfe turned to Guy. "C'est incroyable!  Do you believe this?"  He had automatically reverted back to French.

Rolfe's gaze was like a lance.  "Perhaps she needs to be wedded and bedded.  To learn a woman's true place."

Momentarily distracted, his eyes brightened at some vivid imagery.  Then they narrowed.  "Guy--she is here, the rebels were here.  Who better to pass along a message? Look at her clothes! To heal a sow? I think she came disguised as a peasant to pass a message to her traitorous brothers!  I think she is very smart--thinking to fool me by so openly admitting such a thing."

"Jésus,"  Guy breathed.  As one they turned to look at her.

Ceidre hastily looked away, pretending she hadn't understood.  But she had. Oh, why hadn't she kept her mouth shut! How, in this time of war, could she have declared herself a spy in her fit of temper? Now what would they do? She was already a valuable hostage, and that would keep her alive and safe, as long as they did think she was Alice.  But if they thought she was a spy...And what was all this reference to wedding and bedding? She was struck with foreboding.

"No wife of mine will spy against my king," Rolfe stated savagely.  And he seared Ceidre with a blazing look.

Rolfe's face darkened at the lack of respect in her address.  "Soon you will have to call me my lord," he said.  "Whether you like it or no."