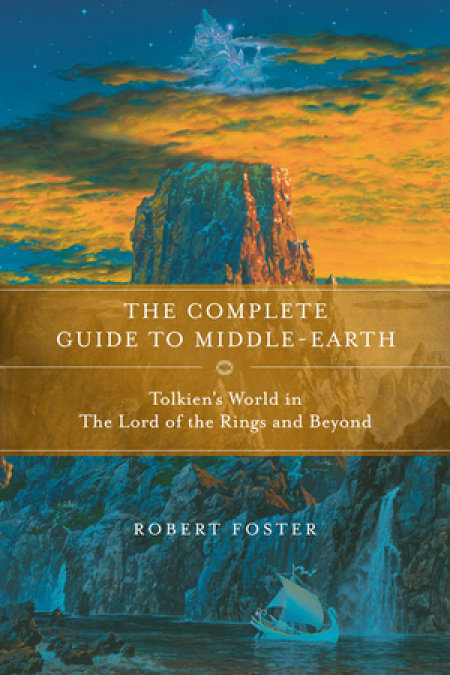 For the millions who have already ventured to Middle-earth—and for the countless others who have yet to embark on the journey—here is the one indispensable A-to-Z guide that brings Tolkien’s universe to life.

EVERY CHARACTER
From Adaldrida Brandybuck to Zaragamba—every Hobbit, Elf, Dwarf, Man, Orc, and other resident of Middle-earth is vividly described and accurately located in its proper place and time.

EVERY PLACE
Colorful and detailed descriptions of geographical entries allow you to pick up the action anywhere in Middle-earth and follow it through The Hobbit, The Lord of the Rings, and beyond.

EVERY THING
From stars and streams to food and flora, everything found in Middle-earth is alphabetically listed and, when necessary, cross-referenced.

This is truly a master key to Tolkien’s Middle-earth.

With the appearance of The Silmarillion, the publication of
J. R. R. Tolkien's mythopoesis is virtually complete. The
reader can now appreciate the full scope and significance of the
history of Aman and Middle-earth, the central stages in the great
drama of the Creation of Eae. One can trace in detail the Light of
Aman from the Two Trees on Ezellohar to the renewing power of
the Phial of Galadriel in the stinking darkness of Shelob's Lair.
The terror felt there by Sam Gamgee is better understood after
reading of the Unlight of Ungoliant, and Boromir's desire for the
Ring can be seen as a wisp of the Shadow of Melkor, who lusted
after Light but created only Darkness. Not only do the great conflicts
between East and West--from the First War and the Battle of
the Powers to the Battle of Fornost and the War of the Ring--
reveal the nature of good and evil and the immeasurable compassion
of Iluvatar, but also, the identity of the forces that intervene
to give victory to the good suggests the progressive freeing of Man
from the influence of both Valar and demons to work out his own
destiny, known to Iluvatar alone.

Writing this revised edition of my Guide to Middle-earth has
enhanced my awareness of these correspondences, designs which
are surely central to the joy of Faerie and which give Professor
Tolkien's work its marvelous and profound coherence. But it has
also made me aware of the difference between the conception and
the realization of this cycle of myth and romance, between the
'visionary scene' and its 'frame,' 1 between the Vision and the Text.
The 'seamless web of Story' 2 is indeed endless and without blemish,
but books--and lives--alas, are not. In the first edition of the
Guide, I used any information available to me that I believed came
from Professor Tolkien and had been transmitted accurately; I
hoped that these details would ultimately appear in print. But
now--faced with a plethora of revised texts, calendars, letters, illustrations,
interviews, anecdotes, and reports of conversations,
some containing contradictory information--I have come to believe
that inconsistencies, sometimes deliberately maintained by
Professor Tolkien, occur where the details of the Vision were not
clear to him, where he was stymied by a single leaf on the Tree,
not sure of 'its shape, and its sheen, and the glistening of dewdrops
on its edge,' 3 not yet ready to fix it in the Text. Yet these inconsistencies,
which can bulk large in an alphabetic treatment of Faerie,
should not be allowed to detract from the general bloom of this
lushly foliated Tree.

So this revised Guide is limited to the Text, to published works
by Professor Tolkien in the latest editions available to American
readers. The basic text for The Lord of the Rings is again the Ballantine
paperback edition, with emendations from the revised
Houghton Mifflin hardback edition; Appendix C contains a concordance
between the two editions. British editions contain several
further emendations, which I have not taken into account; of
those I have heard of or seen, the most significant is the change of
d to dh in Galadrim and Caras Galadon, which resolves the confusion
(encouraged, it seems, by the Elves themselves, as Christopher
Tolkien's comment in The Silmarillion on Galadhriel suggests)
between Sindarin galad 'light' and galadh 'tree.' The three exceptions
to this rule of Text are sources which seem particularly trustworthy:
the Pauline Baynes map of Middle-earth displays a number
of place-names evidently given her by Professor Tolkien; Clyde
Kilby's intimate Tolkien and the Silmarillion contains intriguing hints
of the End; so much of the information contained in Professor
Tolkien's letters to and conversations with my friend Dick Plotz
has been corroborated by The Silmarillion that I feel confident in
using other items.

In general, I hope that I have not forgotten the limits of a reference
work. I count myself fortunate to have wandered in the
Fairy-realm of Arda for fifteen years now, and while my tongue is
certainly not tied, for the sake of my own delight I have learned
not 'to ask too many questions, lest the gates should be shut and
the keys be lost.' 4 This Guide is intended to be supplementary to
the works of Professor Tolkien and no more; its value is that it can
clarify deep-hidden historical facts and draw together scraps of information
whose relation is easily overlooked, thus aiding the
wanderer in Arda in his quest for its particular Truth. When matters
are unclear in the Text I have tried to remain silent, but those
places where I have been unable to restrain my conjectures are liberally
sprinkled with 'perhaps', 'presumably', and such words. By
now the entries which comprise this <i>Guide</i> represent the product
of ten years of intermittent labor and frequent correction by myself
and careful readers, until I can hope that the errors which remain
are more mechanical than substantive.

There is one major deviation from this conservative treatment
of the Text. Unlike The Lord of the Rings, whose Appendix B provides
precise dates for the events of the Second and Third Ages,
The Silmarillion contains little exact chronological information
aside from sporadic indications of the passage of years ('But when
Tuor had lived thus in solitude as an outlaw for four years') and
rough dating from the first rising of the Sun. Desiring to make the
information concerning the First Age more compatible with that
for later Ages, I have taken it upon myself to coordinate these
indications of time into a Chronology of the First Age (Appendix
A). This Chronology may help to unify in the minds of read-ers
the episodic sequence of events and personages in the Wars of
Beleriand; by counting years, it also underscores the rapid collapse
of Beleriand after Dagor Bragollach and the tragedies of the early
deaths of Huor (at 31), Turin and Nienor (36 and 27), and Dior
(about 39). In addition, I must confess to having succumbed to the
scholarly joys of writing an Appendix. The dates given for the
First Age, therefore, both in the entries and in Appendix A, are
strictly my own and should be taken as approximations rather than
as completely trustworthy deductions; my derivation of these
dates is fully explained in the Appendix.

The principles involved in determining entries are fairly
simple. In general, any capitalized word or phrase receives a separate
entry unless it is a clearly identified epithet or a translation of
a name not used independently of the main name; thus there is an
entry for Sulimo but not for its full translation, Lord of the Breath of
Arda, and Voronwe as the epithet of Steward Mardil is not listed
separately. In addition, certain noncapitalized items (mostly the
names of species and objects, such as the great spiders and ithildin)
have been included. Variant spellings (which in most cases reflect
Professor Tolkien's further development of the Eldarin languages)
are noted, but most variations in the use of accent marks have
been ignored. Page references in main entries are to significant references
only; cross-references usually cite the first occurrence
only. Geographical entries do not always cite the maps on which
the place in question is shown, and historical entries occasionally
use dates given in Appendix B without citation; in both cases the
references can easily be found. References to the various Indices
are given only when they contain new information.

When entries are genuine forms in Middle-earth languages, I
have indicated this, giving translations wherever I am sure of
them. A question mark following a language identification or
translation obviously indicates uncertainty. Translated Rohirric
(Old English) forms are occasionally translated again into modern
English; the language of other forms is indicated as 'tr.--' wherever
I felt there was a possibility of confusing them with Elvish or
genuine Mannish forms. However, by and large I have not indicated
the language of names and terms 'Anglicized' into English,
Germanic, or Celtic equivalents; as Appendix F of The Return of
the King suggests, most Adunaic, Rohirric, Westron, Mannish, and
Hobbitish forms have been so translated. In The Lord of the Rings I
have assumed that English versions of Middle-earth names (e.g.,
Treebeard for Fangorn) represent Westron forms used by Men and
Hobbits. But in The Silmarillion this is obviously not the case, since
Westron did not develop until the late Second Age. Here I have
assumed that the English versions, even though capitalized, are
merely translations intended for the convenience of the reader,
not translated Mannish names.