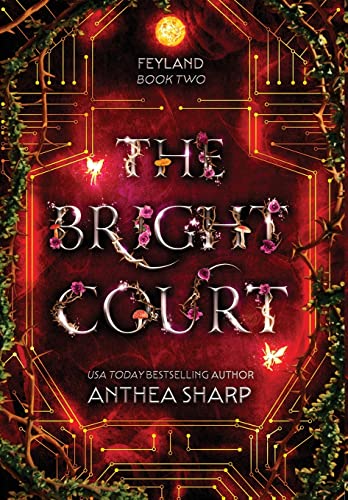 **USA Today bestselling YA Urban Fantasy Book 2 in the award-winning Feyland series** Immersive gaming. Faeries. A hero from the wrong side of the tracks, and the girl he's afraid to love. Not to mention dangerous magic that threatens the entire human world...

INSIDE THE GAME... Jennet Carter escaped the dark faeries of Feyland once. Now, fey magic is seeping out of the prototype game, beguiling the unwary and threatening everyone she cares about.

MAGIC... Tam Linn may be a hero in-game, but his real life is severely complicated. Still, he'll do whatever it takes to stop the creatures of Feyland, even if it means pushing Jennet toward the new guy in school--the one with an inside connection to sim-gaming... and the uncanny ability to charm everyone he meets.

ALWAYS WINS... Despite the danger, Jennet and Tam must return to Feyland to face the magic of the Bright Court--and a powerful new enemy who won't stop until the human world is at the mercy of the Realm of Faerie.

The eerie call of a hunting horn floated over the drowsing city, sending sleepers’ dreams spiraling into nightmare - or jolting them awake, hearts pounding in sudden terror.

Tam Linn sat upright in the hushed dimness of his hospital room. His breath rasped in his throat, the echo of that fey and terrible noise shuddering through him. Forcing his breathing to slow, he listened intently. Nothing. He slid out of the bed and padded to the window, then slowly pushed aside the curtain.

The dark gray sky arched over the city, the lights of Crestview washing out any stars that might be hovering there. No spectral hounds or horned riders galloped across the night. No faerie magic breaking through into the mortal world.

Tam watched a single car navigate the streets beyond the medical center. Soon the city would wake, and he’d finally go home. After three weeks in the hospital, the need to be out of there was severe - jangling his thoughts, burning his nerves. He clenched his hands into weak fists. He was still shaky, but he’d hidden it well enough that the docs had agreed to release him. There wasn’t any more time to lose. Dangerous magic was about to be turned loose in the human world - and he was one of the only people who had a chance to stop it.

Tam walked the crowded halls of Crestview High, feeling like an imposter in his own skin. Everything was different, but it was an invisible change - like his brain had been taken out and refolded into a new shape, then stuck back inside the same old packaging.

Being in a coma would do that.

Not to mention being held as a sacrifice by the faeries of the Dark Court, an experience so outside of normal that it still seemed like a fever-dream. But it had happened.

After that, going back to school was so ordinary it was surreal. Other students brushed past, bits of their conversation floating like mist in the air. Nothing felt solid - until he caught sight of a girl with pale blond hair moving toward him against the tide. Jennet Carter. The one person who knew everything he’d been through.

His world clicked into place.

“Tam,” she said, giving him a warm smile. “It’s great to see you back on your feet.”

She reached out like she was going to hug him, and he did a quick side-step. Not that he didn’t want her to touch him - a part of him did. But they were friends, against all odds, and that was enough. It had to be.

He tried not to notice her high-end clothing, the perfect sheen of her hair, the expensive tablet peeking out of her bag. Especially tried to ignore the wrist-chip implant that proved she was one of the elite. Jennet had everything going for her, while he…

They had nothing in common, except a love of sim gaming - and nearly dying in the Realm of Faerie.

He took a quick look around to make sure no one was listening. “We need to talk, soon. About Feyland.”

She nodded, her smile fading. The bell blared, the harsh, metallic sound startling through him. Welcome back to the real world.

“Let’s talk at lunch.” She stepped forward. “Come on - we don’t want to be late to World History. Ms. Lewis might frown at you.”

He followed her down the hall, stumbling briefly as a wave of dizziness washed over him.

“Are you sure you’re ready to be back in school?” She slowed, her eyes concerned.

“The med techs said I was in decent shape,” he said, evading her question. “Besides, I’ve been gone too many weeks already. If I miss any more school, I’ll have to repeat the year.”

No way did he want to do extra time at Crestview High. Though maybe it didn’t matter - not with the dark creatures of Feyland trying to break through into the mortal world. Who knew if there would even be a next year?

“If you say so.” Her voice softened. “I was worried about you.”

He shot her a sideways glance. “You visited me practically every day in the hospital.”

And, weirdly, visited his dreams as well. Did she share those hyper-real visions? Tam felt his cheeks heating, and dipped his head, his hair falling over his eyes. So, he’d imagined kissing Jennet. In dreams. Not real, and he’d better not start thinking they were.

“Seeing you in the hospital…” Jennet’s voice was unsteady. She cleared her throat. “Anyway, you’re up and walking and, well, you’re you again.”

He wasn’t so sure, but there didn’t seem to be words to explain. And even if there were, Ms. Lewis’s classroom wasn’t the place to go all emo.

“Mr. Linn!” The teacher clasped her hands together and smiled at him as he took his seat. “How wonderful to see you.”

He mumbled a greeting, then pulled out his battered school tablet. Luckily, Ms. Lewis’s attention was diverted today. She kept glancing at a tall, unfamiliar boy seated in the front row. As soon as the second bell rang, she held up one hand.

“Class - attention, class! I’m pleased to announce we have a new student here at Crestview High. Mr. Royal Lassiter - oh, do stand up, Roy.” She beamed at the new boy. “Tell us a bit about yourself.”

An introduction speech. Really? Tam shot a look at Jennet, who raised her eyebrows. Crestview never bothered with things like that. At least, they never had in the past.

The new student stood and turned to face the class. All the girls drew in their breaths, and Tam squinted, trying to see the ap

peal. Despite his expensively rumpled clothes, Roy Lassiter didn’t seem all that special. Reddish-brown hair, angular nose, chin a bit on the weak side. An easy grin lay on his face, but his dark eyes were calculating.

Something glinted at his wrist - a chip implant. He was one of the company kids who lived up at The View. One of the privileged ones, like Jennet.

“Hey, everybody,” Roy said. His voice had an odd, hollow timbre. “I know I’m happy to be here, and that I’ll make a lot of new friends. Crestview seems pretty sparked. So come up and say hi after class, right?”

He sat down, and the class applauded. Applauded? Tam shook his head. That was the weakest speech he had ever heard - plus Roy hadn’t said anything real about himself. But for some reason everyone was smiling and nodding.

Everyone but Jennet. She had her head down and was scribbling something on her tablet. A second later, the corner of his screen lit up with a private message. He glanced at the front of the classroom, to make sure Ms. Lewis wasn’t watching, then clicked the message open.

Great. Unease shivered down his spine. The new student was hooked into VirtuMax, the company Jennet’s dad worked for. The company that was developing the immersive sim game of Feyland. The game that had nearly killed him.