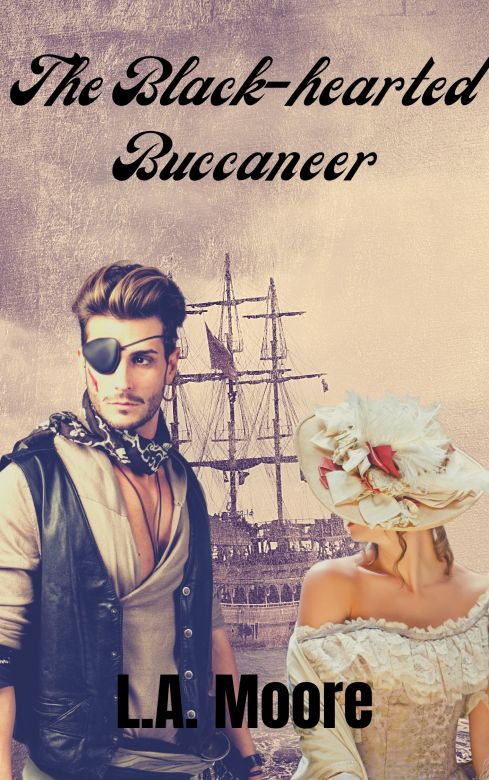 He stood on the deck on his ship looking out over the broad piece of land before him, both dreading and anticipating the nights’ coming.

He was not a mature looking man; in fact he looked no older than a young man just out of school - despite the fact that he had just recently celebrated his thirtieth birthday. His hair was so black that beneath the rays of the sun some had sworn it was as deep blue as the waters he sailed upon.  He wore it long, reaching to just past his shoulders where it laid like a straight stream down his back, and he kept it bound at the nape of his neck so as to keep it from whipping into his face when the winds crossed.  His eyes were an illuminating blue, a mesmerizing trap that pulled you in just before consuming you. So charming they were; one minute luring you in, imploring you to come close and relax in their comforts; the next dangerous, cold, hard, and unfeeling to such a level they made you want to avert your eyes and run and hide just to get away from their icy embrace. He had proud cheek bones that flowed seamlessly into his strong jaw bone and chin; his nose was long and straight, leading to a full mouth that begged to be kissed. His body was slender but well filled out. His muscles stretched taut over his frame and rippled beneath his skin like the waves of the ocean in a rhythmic dance. His skin was smooth but weathered, having been slowly tanned to the color of burnt sienna from the many years spent under the scorching sun. He was a rare sight to behold and the ladies vied for his attentions at every port they visited. Each one hoped in vain for him to turn his gaze in their direction and give them the chance to bring out emotions in him they are sure are there but are deeply hidden behind the façade of his charming smile. He turned as the evening sun gently cast a shadow over him, giving him the illumined look of a much older man. He was dressed in black pants, a midnight blue shirt, silver vest, and black evening coat each of which had been finished with polished silver buttons and had been carefully tailored to accentuate his looks and fit his frame to perfection, commanding the attention of anyone who saw him.

He called for his first mate who was an equally young looking lad and his best friend. He had been the first to join him on his mission of revenge all those years ago and the only one who knew his true past and darkest secrets. He had been there and was the only friend the Captain had had at the time and was unquestionably the only reason he was still alive today.

Jacy, he had once divulged to Devon, meant moon in Native American, and was his given name. But once he had come on board the ship, the Captain and crew had taken to calling him simply ‘Boy’. A name he had come to despise, almost as much as he had hated the previous captain. Unfortunately it had stuck with him until he had risen up and earned his new rank as First Mate at Devon’s side. Now the crew called him Chief and Devon doubted any of them knew what his real name was. Jacys’ childhood had been a complete opposite to Devon’s. Where he had been raised in privilege and loved by his parents, Jacy had been abducted from his birth parents as a toddler and raised up along other slaves until the ships previous Captain had taken notice of him. His owner had brought him to the slave market where the previous Captain had been selling slaves. He had been a young boy at the time and hadn’t understood why his Master had brought him along. Nothing would do the previous Captain but to have the boy, so he had traded his owner two of his youngest Irish slaves for him. The previous Captain had made him his cabin boy and for a time he had thought he had found freedom. To say his childhood had been rough would be like comparing a gentle rain to the hell of hurricane, and Devon knew deep down that he had saved Jacy as well that night. It was not something they discussed, but each knew they had saved the other that night  - and in doing so, had formed a bond stronger than any blood relation could. Jacy had not spoken eagerly of his past, it had come out in bits here and there during their time served together under the previous Captains’ rule, but Devon didn’t need the details to know thing’s had been bad for Jacy. This is why once he took over the ship he had made him his First Mate and had done his best by him since. If it had been possible to have had two Captains for one ship Devon would have gladly shared it with Jacy, but it was not. When the time came that they obtained another vessel, he offered it to Jacy who promptly punched him hard in the eye and stalked off muttering under his breath what an ungrateful cur Devon was. Devon smiled at that memory and thought himself lucky to have such a good friend.

Jacy had a nice robust body which filled out his worn clothes quite well. Where Devon was slender but muscular, Jacy was plump and full of muscle. He had a deep natural tan that left his skin bronzed with just a tinge of a deep umber thanks to his Native American heritage and years at sea. His eyes were so dark brown some said they were as black as his mood.  His hair was long and straight and though Devon had tried to convince him to bind it in rawhide as he did, he preferred it to flow loosely and wildly about his shoulders, giving him an even more dangerous and unruly look. He wore a thick, short beard and mustache that covered most of his face which he kept meticulously trimmed. As for clothing, he preferred to wear a fairly clean but serviceable pair of brown pants and a white shirt with his favored and only worn black wide- brimmed hat firmly tucked onto his head. The only time he wore anything different was if they were going to port, as they were tonight, in which case he would air out his black suit, white shirt, and black vest and don his only pair of black boots. To finish off this polished version of himself he would tie his hair back and clean his hat. He looked presentable enough to go most places with Devon and the ladies never complained so he saw no need to invest in such finery as Devon did. He had never been very comfortable around the upper crust folk that Devon hung around with so he didn’t envy him having to get all gussied up to go to some party. No, it suited him just fine to follow him there and wait outside while Devon conducted business and, on his days off, to spend the rest of the day carousing in the local bar with his mates; and if the prospects were good, the night with a welcoming wench.

When Jacy arrived at his Captain’s side, he was asked to give a rundown of the ship and a detailed list of provisions they would need. He did as he was asked without question as this had become a ritual before they docked at each port. This was the First Mates normal attitude, this solitary air he waved at everyone and spoke only when necessary to the crew. His Captain however, was one of the only people he could carry a conversation with- the only one who knew and shared his past. The only one who felt the same pain, the only one who could ever understand him and his loyalty was unwavering.

Devon thanked and dismissed Jacy so that he could attend to the final preparations before docking while he went to his quarters to write in his captain’s log.

We are docking today in an English port. I am instantly tormented by my past and by her. I cannot say what has drawn me here once again after such a long time- perhaps guilt, perhaps self-torture, but I feel it calling to me, this place. It is the day of love and the opportunity for money will be as easy as taking candy from a babe. I feel almost pity for the people I will encounter tonight as I do every year on this day; all so young and eager to find love, to get married, and start a life together. All of them stupid and trusting with their heads full of fluff and hopes and dreams of the future with no thought in their juvenile heads as to the full depths of decisions they are making all in the name of love. What do they know of love? What does anyone know of love until they have had it and lost it? The memories of her wreak havoc on my mind, running over and over, when all I wish is for peace and forgiveness. But my mind won’t have it- I can still see her laying there, ravaged and bleeding and begging for me to help her. Then he’s there and grabs her by her beautiful golden hair and pulls her up just before he slits her throat and all I can do is scream. They hold me down and force me to watch while they laugh, LAUGH while her life drains away on the deck and half my heart with it! I know of love, I know what it is to have it and lose it. Stupid fools, all of them! But I will take their money all the same as I have every time before.

His crew hurried about readying the ship to be docked and preparing the boat for the night’s job. Once they were docked, Captain Devon Delacroix ordered his crew into action. Demanding the ship be prepared and restocked within hours so they could slip in and back out of port with as little notice as possible. He reminded them once again how this step was crucial to the whole plan and issued dire warnings if anything were forgotten or they were held up for any reason. Being quick was crucial when transporting indentured servants and since he was only taking on a new load, he wanted to get in and get out before any of them changed their minds. The crew moved with a practiced speed and grace of an ant colony, each with a particular mission and a strict timeline enforced; the threats having been issued, they were wasting no time in obeying orders. ...