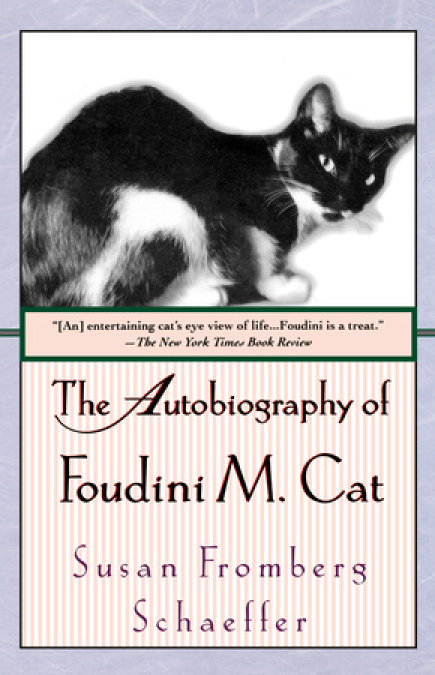 Grace the Cat is not at all like me, as she is forever bent on mischief. But because I am an older and wiser cat, she looks to me for counsel, and so I have allowed Grace to prevail upon me to set down the story of my life as a housecat in the human world. . . .

As the irrepressible Foudini M. Cat regales us with his adventures, an exciting story unfolds. After his valiant but frail mother leaves him in search for food and never returns, the starving kitten is taken, hissing and spitting, to a frightening room with cages and men in white coats. Facing the specter of eternal sleep, the homeless cat is adopted by a woman he later calls "Warm." ("All cats like to make up strange names for things.")

From here Foudini enchants us with splendid tales of his unlikely but ultimately poignant friendship with Sam the Dog; their trips between Cold House in the city and Mouse House in the country; his mystical experiences with famous felines of the past; his near-death in a raging river that leads to a profound act of sacrifice; and his introduction to a silly young thing named Grace, which evolves into something completely unexpected.

In the beginning, I was not a housecat.

I was born in a wall. And when I was born, it was very cold. Water had frozen everywhere, so it was difficult to find water to drink, and snow fell constantly, so my mother would spend a great deal of her time searching for food and for a warm place for the two of us to live. I do not myself remember the long, exhausting searches for food, the nervous prowlings on streets waiting for an opportunity to slit open a plastic trash bag, although my mother told me of this, but I do remember the terrible cold. I remember shivering until I was exhausted, and I remember how thin my mother grew, until her ribs protruded through her fur, and she was not as soft to sleep upon as she had been when I first came to myself in the world.

My mother was an intelligent and farsighted cat, because she did eventually find us an exceptionally good home. She came upon an apartment building whose basement window was loose. She dragged me through the space between window and wall, and we found ourselves in a warm basement, which became even warmer and more lovely whenever the washing machines and dryers were in use. My mother found out the warmest and safest places, and taught me to sleep in them. I slept beneath a dryer and behind a washing machine, and my mother saw to it that I hid when anyone came down to use the machines.

This was a good place for a cat to live in the middle of the winter. There were many mice when we first came, and my mother caught them, and we ate them, but soon she had caught all the mice there were. We ran out of food, and after three days with nothing to eat, my mother went back out through the window to hunt for something to eat. Of course I expected to see her again. I expected to hear her voice, saying, Look what I have for you. I didn’t realize that she would never come back. Who would have thought such a thing was possible? But she never returned, and I was left to fend for myself in the basement, where I was warm, if hungry. One day, a mouse ran right in front of me, and I tried to leap upon it, but it was faster than I was, and ran away. It takes a long time to become a good mouser, and many small cats die of hunger before they learn to hunt. It is not an easy world.

Do you hear that, Grace, sleeping on your warm rug in front of the hot-air vent? It is not an easy world. Don’t make that mistake. I remember having heard of a housecat who was taken to the country and was for the first time let out-of-doors. Without looking either to the right or to the left, he walked straight into the woods, and if his person hadn’t rushed after him and swept him up, he would have been eaten by raccoons. But how could he know better, when for years the entire household had revolved around him?

One day I came out from behind the dryer, intending once again to look for a mouse, but my four legs were weak beneath me, and I sat down in the middle of the cold cement floor. Just then a man and a woman walked in, and the woman said, “Oh, look, a tiny cat!” She came over to me and tried to pick me up, but I had seen how my mother defended herself against these human creatures, and I was a sensible cat, if tiny, so I hissed at her, rolled over on my back, and extended my still-thin claws. Then I fled back to my residence behind the dryer.

“That cat is starving,” the woman said. “I wonder what happened to his mother?” Then they said how wise my mother had been to hide me in a warm basement, and I was pleased to hear this, because, young as I was, I knew it was true.

Later, as I grew ever more hungry, I began to come out into the open more and more, and it seemed that whenever I appeared, so did the woman, who each time tried to catch me, but I was too fast for her. When she saw her attempts were useless, she brought down a plate of dry food. The smell was delicious, but the small, hard pieces were too difficult to chew. When the woman saw this, she poured a glass of warm milk into the dish, and this softened the food enough so that I began to eat. The woman seemed very pleased, and I grew to like her, but I never ate without watching her carefully out of the corner of my eye, lest she once again lunge and try to capture me. But she would only watch me and smile.

And then one day she came down with a cardboard box, and I knew immediately that she planned on packing me into it, and so I began to hide from her again. Now she waited longer to feed me, waited until she was sure I would be truly hungry, so that I would once more eat from the dish while she watched me. Still, as soon as she reached out to touch me, I was back behind the dryer. I was a clever cat, like my mother, and had no intention of letting myself be caught and winding up in someone’s stew pot, which is what my mother said happened to foolish kittens who let anyone and everyone who walked by scratch them behind their ears.

I would have been safe from that woman, and my life would have been entirely different, if I had not come down with a cold. Immediately after I began sneezing, my eyes grew crusty and runny. When the woman saw this, she redoubled her efforts to catch me.

As it turned out, all she had to do was wait. My eyes itched and oozed, and sometimes when I blinked, my eyelids stuck together and I had to blink hard to get my eyes open. And then one day my eyelids stuck together, and nothing I could do would make them open. I rubbed them with my paw. I licked my paws and rubbed again, but my eyes were stuck, and firmly stuck. I could see nothing at all. When I smelled the plate of food, I staggered blindly out from behind the dryer, and suddenly I heard a loud noise. The woman had dropped her carton over me, and I was in her cardboard box at last. Today is the day I will be eaten, I said to myself. She has been fattening me up.

But the woman did not eat me. She took me to a building where someone put drops in my eyes so that they opened, although they were still crusty. There were men in white suits called doctors and many cats and dogs in cages. I was put in one of these cages and quickly went to sleep because I was tired and had no hope of getting out. Every few hours, a hand reached in for me, and I was stuck with a sharp needle, and a glass tube was inserted in the opening beneath my tail. I was terrified, and again and again I thought, These people mean to kill me. Whenever I heard anyone come near my cage, I began to hiss and spit and claw until finally they wrapped me in a towel to keep themselves safe from me. At last I began to feel stronger.

“He is wild and insane and vicious,” the doctor told the woman who had brought me there. The woman said that even so she would have liked to take me home, but my very presence made her sneeze. “How odd that is, when I love cats better than anything else,” she said.

She is paying no attention. I can tell.