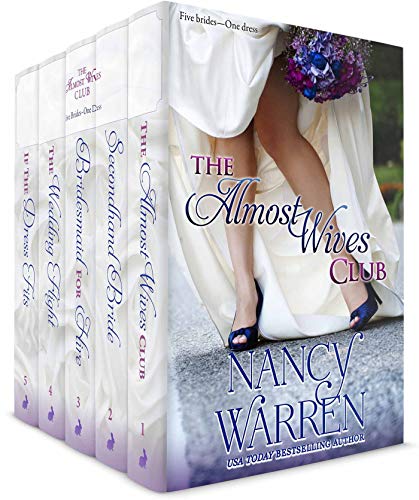 Now you can follow all five brides for one low price in The Almost Wives Club 5-in-1 Box Set.
Love comes in unexpected ways at inconvenient times in these five full-length romantic comedies where one designer bridal gown leads each bride to her perfect groom—even if he's not the one she'd had in mind.
Follow five runaway brides in this romantic comedy series as they find love in the most unexpected places.

Is the bridal gown a matchmaker?
Kate Winton-Jones is marrying one of America's most eligible bachelors. Edward Carnarvon III is rich, handsome and hers. But at the final fitting of her wedding gown, one of the seamstresses pricks her and a tiny blood spot appears on the outrageously expensive gown. Its famous designer fires the clumsy seamstress on the spot, whereupon the girl puts a curse on the dress and storms out. Kate doesn't believe in curses. She's modern, American and in love with the perfect guy. What could go wrong?

As the poor relation in the rich and powerful Carnarvon family, Ashley Carnarvon is used to hand-me-downs. But getting handed down a wedding dress that's cursed? Okay, the curse is bad enough, but even worse, the dress doesn't suit her. The fabulous gown was designed for a taller, slimmer bride who ran away before the wedding and never wore the dress – which gets back to the curse...

Tasmine Ford is such a perfect bridesmaid, she's made a side business out of it. But, when a gorgeous designer wedding gown is handed to her, after the bride who is supposed to wear it climbs out the window on her wedding day, she starts to wonder, will she always be a bridesmaid and never a bride? It's not that she doesn't know exactly who she wants to marry. But Eric Van Hoffendam wants to cry on her shoulder, not ask for her hand in marriage.

She's passing a vintage store on Melrose Avenue when Meg O'Reilly catches sight of the prettiest wedding dress she's ever seen. On impulse she tries it on and the guy who runs the vintage store tells her she looks beautiful. The gown fits like it was made for her and when she twirls in front of the mirror, she feels like a fairy princess. Not even her Doc Martens ruin the effect.

Evangeline is a former supermodel more famous for the men she's dated and the scandals she's been involved in than for her acting talent. Now, the famous Brit has turned her hand to designing wedding gowns and lingerie for the rich and famous. It's an open secret that she only designs her outrageously priced gowns for attractive women. The Diva Designer also has a famous temper. She's been wildly successful until an unfortunate incident ended with a seamstress cursing both her and her latest wedding gown. Now rumours are circulating, and the press are picking up the juicy story of the cursed wedding gown. Four brides have attempted to get married in the cursed dress and none of them has made it down the aisle. To squelch the rumours, Evangeline announces publicly that she is wearing the gown herself—for her own wedding.

For a romantic read full of love, laughs and friendship, scroll up and grab your copy today.

To stay on top of all new releases, sign up for Nancy's newsletter at www.nancywarren.net