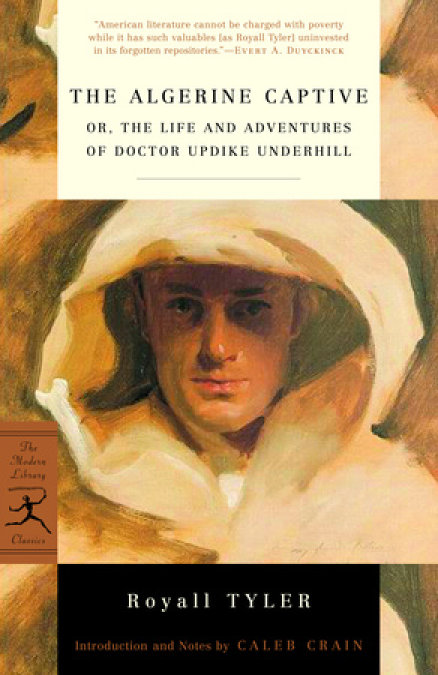 A predecessor of both the nativist humor of Mark Twain and the exotic adventure stories of Washington Irving, Herman Melville, and Richard Dana, Royall Tyler’s The Algerine Captive is an entertaining romp through eighteenth-century society, a satiric look at a variety of American types, from the backwoods schoolmaster to the southern gentleman, and a serious exposé of the horrors of the slave trade. “In stylistic purity and the clarity with which Tyler investigates and dramatizes American manners,” the critic Jack B. Moore has noted, The Algerine Captive “stands alone in our earliest fiction.” It is also one of the first attempts by an American novelist to depict the Islamic world, and lays bare a culture clash and diplomatic quagmire not unlike the one that obtains between the United States and Muslim nations today.

One of the first observations, the author of the following sheets made, upon his return to his native country, after an absence of seven years, was the extreme avidity, with which books of mere amusement were purchased and perused by all ranks of his country- men. When he left New England, books of Biography, Travels, Novels, and modern Romances, were confined to our sea ports; or, if known in the country, were read only in the families of Clergymen, Physicians, and Lawyers: while certain funeral discourses, the last words and dying speeches of Bryan Shaheen, and Levi Ames, and some dreary somebody’s Day of Doom, formed the most diverting part of the farmer’s library. On his return from captivity, he found a surprising alteration in the public taste. In our inland towns of consequence, social libraries had been instituted, composed of books, designed to amuse rather than to instruct; and country booksellers, fostering the new born taste of the people, had filled the whole land with modern Travels, and Novels almost as incredible. The diffusion of a taste, for any species of writing, through all ranks, in so short a time, would appear impracticable to a European. The peasant of Europe must first be taught to read, before he can acquire a taste in letters. In New England, the work is half completed. In no other country are there so many people, in proportion to its numbers, who can read and write; and therefore, no sooner was a taste for amusing literature diffused than all orders of country life, with one accord, forsook the sober sermons and Practical Pieties of their fathers, for the gay stories and splendid impieties of the Traveller and the Novelist. The worthy farmer no longer fatigued himself with Bunyan’s Pilgrim up the “hill of difficulty” or through the “slough of despond;” but quaffed wine with Brydone in the hermitage of Vesuvius, or sported with Bruce on the fairy land of Abysinia: while Dolly, the dairy maid, and Jonathan, the hired man, threw aside the ballad of the cruel stepmother, over which they had so often wept in concert, and now amused themselves into so agreeable a terrour, with the haunted houses and hobgobblins of Mrs. Ratcliffe, that they were both afraid to sleep alone.

While this love of literature, however frivolous, is pleasing to the man of letters, there are two things to be deplored. The first is that, while so many books are vended, they are not of our own manufacture. If our wives and daughters will wear gauze and ribbands, it is a pity, they are not wrought in our own looms. The second misfortune is that Novels, being the picture of the times, the New England reader is insensibly taught to admire the levity, and often the vices of the parent country. While the fancy is enchanted, the heart is corrupted. The farmer’s daughter, while she pities the misfortune of some modern heroine, is exposed to the attacks of vice, from which her ignorance would have formed her surest shield. If the English Novel does not inculcate vice, it at least impresses on the young mind an erroneous idea of the world, in which she is to live. It paints the manners, customs, and habits of a strange country; excites a fondness for false splendour; and renders the homespun habits of her own country disgusting.

There are two things wanted, said a friend to the author: that we write our own books of amusement, and that they exhibit our own manners. Why then do you not write the history of your own life? The first part of it, if not highly interesting, would at least display a portrait of New England manners, hitherto unattempted. Your captivity among the Algerines, with some notices of the manners of that ferocious race, so dreaded by commercial powers, and so little known in our country, would be interesting; and I see no advantage the Novel writer can have over you, unless your readers should be of the sentiment of the young lady, mentioned by Addison in his Spectator,6 who, he informs us, borrowed Plutarch’s lives; and, after reading the first volume, with infinite delight, supposing it to be a Novel, threw aside the others with disgust, because a man of letters had inadvertently told her, the work was founded on fact.

Chapter I.
Think of this, good Sirs, But as a thing of custom—’tis no other, Only it spoils the pleasure of the time. Shakespeare. Argument.

The Author giveth an Account of his gallant Ancestor, Captain John Underhill, his Arrival in Massachusetts, and Persecution by the first Settlers.

I derive my birth from one of the first emigrants to New England, being lineally descended from Captain John Underhill, who came into the Massachusetts in the year one thousand six hundred and thirty; of whom honourable mention is made by that elegant, accurate, and interesting historian, the Reverend Jeremy Belknap, in his History of New Hampshire.

My honoured ancestor had early imbibed an ardent love of liberty, civil and religious, by his service as a soldier among the Dutch, in their glorious and successful struggle for freedom, with Philip the second of Spain; when, though quite a youth, he held a commission in the Earl of Leicester’s own troop of guards, who was then sent to the assistance of that brave people, by the renowned Queen Elizabeth of England.

The extravagant passion, which that princess was supposed to entertain for various male favourites, which occasioned the disgrace of one, and the premature death of another, while it has furnished a darling theme to the novelist, and has been wept over in the tragic scene, has never yet received the sober sanction of the historian.

A traditional family anecdote, while it places the affection of the queen for Leicester beyond doubt, may not be unpleasing to the learned reader, and may benefit the English historiographer.