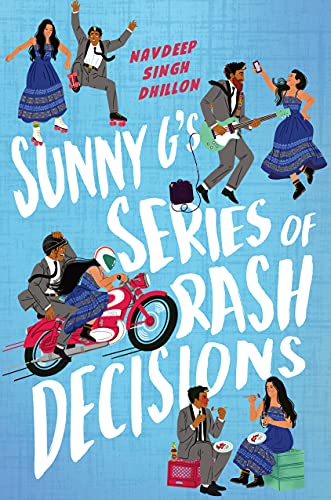 “Pitch-perfect. One of the most endearing teen voices I’ve ever encountered.” —Becky Albertalli, #1 New York Times bestselling author of Simon vs. the Homo Sapiens Agenda

For fans of Sandhya Menon and Adam Silvera comes a prom-night romantic-comedy romp about a Sikh teen's search for love and identity.

Sunny debuts his new look at prom, which he's stuck going to alone. He's skipping the big fandom party—the one where he'd normally be in full cosplay, up on stage playing bass with his band and his best friend, Ngozi—in favor of the Very Important Prom Experience. An experience that's starting to look like a bust.

Enter Mindii Vang, a girl with a penchant for making rash decisions of her own, starting with stealing Sunny's notebook. When Sunny chases after her, prom turns into an all-night adventure—a night full of rash, wonderful, romantic, stupid, life-changing decisions.

"Reading Sunny G’s Series of Rash Decisions is the best decision you could make.” —Jeff Zentner, award-winning author of The Serpent King 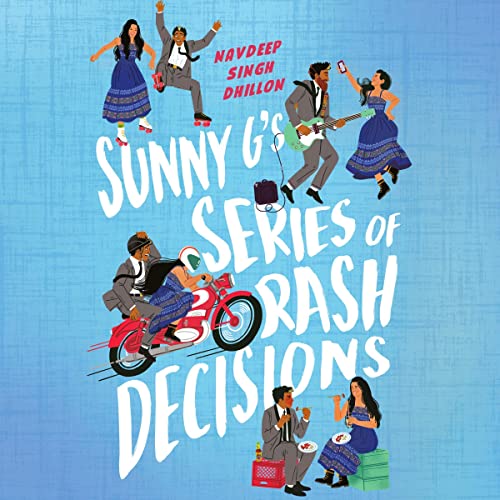 Ever look in the mirror and think to yourself: I look fantastic. My face, my nose, my eyes, the blond streak in my hair, my body, these clothes. Everything is lit.

I’m in the gender-neutral bathroom at prom, where an alarming number of people are not washing their hands. I’m staring at my phone, unable to commit to pressing the “add to story” button on this post. I hit delete and take more photos from several different

ngles, experimenting with various facial expressions ranging from Oh, I didn’t see you there to I am Sunny Gill Rebranded: Hear Me Roar.

It’s a little jarring looking at this new face in the mirror. I’ve been in here for eight minutes and counting, trying to regroup. I was ready to do this thing, make this my big night. Then I find Stefan sitting front and center at the table I was randomly assigned to. Of all people, it had to be him, the dude who made my life a fucking nightmare from seventh grade on. So I bolted straight to the bathroom, and now I’m reassessing all the grooming choices I’ve made since Thursday. Including the blond streak I had added at Super Cuts, hoping for a bit of whimsy.

It’s not that I don’t like this new face. It just feels like a stranger staring back at me—the beard and turban gone, replaced by gelled-up, wavy, shoulder-length hair. My beard was never a sexy Jason-Momoa-as-Aquaman beard, or wild and dangerous like Dafydd the Feeble’s from the Jamie Snollygoster series me and Ngozi are obsessed with. Not as cool as my brother Goldy’s manicured designer dari, with the twirled-up mustache, or as intimidating as the rough bristles of Papa’s salt-and-pepper beard. But it was uniquely mine: a sparse, soft layer of black sprinkled over my cheeks.

Almost all of the older warriors and sorcerers in Jamie Snollygoster have beards, a sign of wisdom and courage, hard-won from a lifetime of wielding magic and battling baddies. Or maybe they don’t have time for grooming? A good ten pages of book one was spent on the first years contemplating their future beards. That’s what initially drew me to Dafydd—his magnificently wild I-don’t-care beard.

The summer before ninth grade I made the transition from wearing a patka—the kid version of the turban—to the one adults wear: the pag or dastaar. I was excited. My beard was lightly coming in, I could recite a respectable number of pauris from the opening sacred composition of our Holy Scriptures, the Guru Granth Sahib. I’d had enough of the childish patka. I was ready to man up and claim the dastaar. Plus Goldy thinks anyone who has a beard and is still wearing the patka deserves all the ridicule they get. He calls it the Sikh toddler look.

Before I committed, I spent hours researching turban styles, watching Sikh TikTok stars, Punjabi singers, and vloggers on YouTube. I even uncovered some fun facts. For example: The word dastaar comes from the Farsi dast-e-yār, meaning “the hand of the

Divine.” And the word dolband became turban thanks to the terrible pronunciation of the French and English.

An eternal optimist, I thought I would glide on in to my first day at Barstow High, the most badass ninth grader wearing dollar store sunglasses, a turquoise dastaar, tied patiala shahi style. I walked in with the swagger of a Punjabi singer or Bollywood star ready to defend the honor of his girl/family/village with a dramatic AF preamble before unleashing The Thappar of Pain #ttp. I had high hopes. No more bullying. Reverence. Awe. Girls swooning.

It took one terrorist comment from Stefan to unravel it all.

I wish I had Papa’s confidence. His pag has always been one style that takes him ten minutes to tie: mildly creased and pointed, super wide and loose. Hair is one of the fundamental outward physical characteristics of being a Sikh, and the one that Papa says is the easiest thing to do: “You don’t even have to do anything. Let nature take its course!”

My brother, Goldy? His confidence is on another level. Never a planner. No research, no watching turban-tying tutorials, nothing. Probably woke up every morning and rocked

whatever turban style he felt like. For his prom, he wore a ridiculous silk teal peacock dastaar. He got drunk that night and needed me—his little brother—to once again cover for him. Yet he’s the one Mama and Papa talk about like he is the most amazing son that ever existed.

My hand instinctively pats the journal inside my bright orange-and-red skull-on-fire crocheted pouch—part of my Dafydd the Feeble cosplay. Biji—my grandmother—and I sell the pouches, among other things, on Loom the Fandom, our Etsy store. Well, technically the store is on Etsy—that’s where you have to go to actually buy things. But my social media business presence is on Instagram, where I answer questions and post pics. The pouches do pretty well. You’d be surprised by how many people design amazing pocketless costumes and forget to make matching accessories. The mark of a beginning cosplayer: a kickass cosplay ruined by a fucking tote bag from Trader Joe’s. My pouch is a lifesaver. It holds all my manly essentials: breath mints, hand sanitizer, phone, money, cards, a small set of keys, and of course, Goldy’s journal. Which is kinda mine now.

I’m glad nobody else from our Bramble-core heavy metal band, Unkempt, is here, because they would all be taking shifts telling me how anti-canon it is to wear my crocheted pouch without a kilt or armor. Especially Ngozi, my best friend and the lead singer. She thinks she gets a say in everything about my life. Do I get a say in hers? Not bloody likely. She’s British. Says weird shit like that all the time. But when I say anything, suddenly it’s “Sunny, you plonker.” Or “Leave it out, Sunny.” Which are not even legit Britishisms, they’re from some obscure Brit TV show she and her mom watch.

Every year me, Ngozi, and the rest of Unkempt play at the Snollygoster Soiree, an annual shindig dedicated to the world of Jamie Snollygoster. Even though Jamie has millions of fans and is the star of the Snollygoster series, me and Ngozi never liked the entitled fucker. Maybe he just reminds us of Stefan with his “jokes” about people’s weight and the way they speak. Or perhaps it’s that Jamie couldn’t just sit his ass down and memorize some fucking spells instead of looking for illuminated maps by opening doors nobody told him to open.

Plenty of other fans feel the same way, which is why the heavy metal Bramble-core subgenre is even a thing. Me and Ngozi immediately loved the two minor characters,

Dafydd and Safia Brambleberry, father and daughter sorcerers who lived at the unnamed tavern just outside the grounds of Malmesbury Academy. We started writing about them in our fanfiction, which quickly turned into songs. We both felt like Safia should have been the real hero of the books anyway.