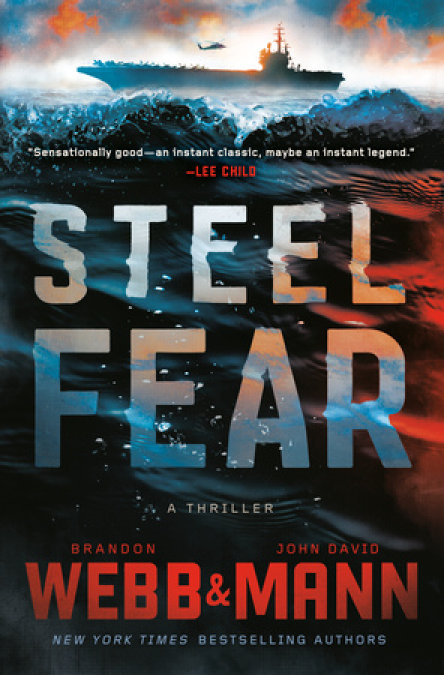 An aircraft carrier adrift with a crew the size of a small town. A killer in their midst. And the disgraced Navy SEAL who must track him down . . . The high-octane debut thriller from New York Times bestselling writing team Webb & Mann—combat-decorated Navy SEAL Brandon Webb and award-winning author John David Mann.“Sensationally good—an instant classic, maybe an instant legend.”—Lee ChildThe moment Navy SEAL sniper Finn sets foot on the USS Abraham Lincolnto hitch a ride home from the Persian Gulf, it’s clear something is deeply wrong. Leadership is weak. Morale is low. And when crew members start disappearing one by one, what at first seems like a random string of suicides soon reveals something far more sinister: There’s a serial killer on board. Suspicion falls on Finn, the newcomer to the ship. After all, he’s being sent home in disgrace, recalled from the field under the dark cloud of a mission gone horribly wrong. He’s also a lone wolf, haunted by gaps in his memory and the elusive sense that something he missed may have contributed to civilian deaths on his last assignment. Finding the killer offers a chance at redemption . . . if he can stay alive long enough to prove it isn’t him. 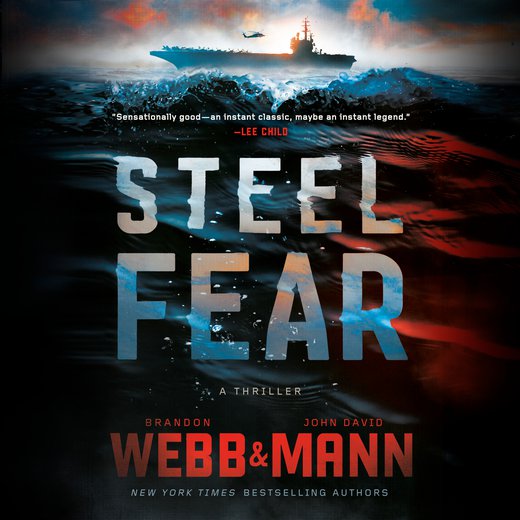 Shivers rippled over Monica Halsey’s naked skin as she peered into the steel mirror and splashed water on her face. Monica needed to be on her game tonight. She was close to earning her helicopter aircraft commander qualification, and tonight’s hop was a critical step in that process.

Because Papa Doc was flying with her.

She shivered again. Lord, why did they keep the AC up so high in this place? She pulled on a red­—
squadron colors­—then fished out a tan flight suit, stepped into the legs, pulled up the suit, and slipped her arms into the sleeves.

His name wasn’t really Papa Doc, of course, it was Nikos Papadakis, and he was a control freak and a bully. Which was unfortunate, because he was also her commanding officer.

Papa Doc didn’t like her. She didn’t know why. Some security issue, probably; his daddy hit him or the big kids teased him or Lord knew what, but whatever the reason, it was a problem, because he held the keys to the kingdom­—the kingdom in this case being Monica’s HAC qual.

Which Papa Doc had the power to quash.

She zipped her flight suit up the front to mid-sternum, rolled up the sleeves to mid-forearm.

Focused on her HAC, and on what lay beyond that.

A tour at the Pentagon, some high-profile posting, maybe an admiral’s aide? Tough job to get, and well worth it. If she did an excellent job there (and she would) she’d have people in high places looking out for her. Proceed to O-5, commander, and then O-6: the promised land. As a captain all sorts of posts would open up to her. Command of a ship. A cruiser. Even a carrier. Why not? And after captain came admiral. There’d been plenty of female admirals in the navy by now, even one full-ranked female four-star. The admiral of their own strike group was a woman. Not impossible at all.

Eyes on the prize.

The most important event shaping Monica’s life occurred ten years before she was born. In 1983 a thirty-two-year-old astronaut named Sally Ride flew the space shuttle Challenger and became the first American woman in space. On a third-grade school trip to the Houston Space Center Monica learned all about Sally Ride, learned that girls could actually become astronauts, and at the age of eight she fell in love. From that day on she wanted to fly more than anything in the world.

She bent down, slipped on her brown oxfords, and began lacing them tight.

In junior high she learned about Kara Hultgreen, the first female navy combat aviator, and her ambition shifted from astronaut to fighter pilot. She also learned that the USS Abraham Lincoln became the first Pacific Fleet carrier to integrate female aviators into its crew in 1993, the year Monica was born. It was on the Lincoln’s flight deck that Hultgreen flew her F-14 Tomcat.

Monica looked again at her reflection in the polished steel. “And here we are,” she whispered.

She glanced around the dimly lit stateroom. Anne, one of her roommates, lay back on her rack, headphones on, murmuring incomprehensible phrases. Anne was sucking another foreign language (Mandarin, this time) into her voracious brain. Kris was on flight duty, gunning her F/A-18 somewhere up there through the Mesopotamian murk. The fourth rack, the one above Anne’s, was empty now. Monica forced herself not to look at it. The sight still put a knot in her stomach.

She reached for her toothbrush and squeezed on a pearl of toothpaste.

She’d learned a few more things in junior high, too. She learned about something called the “Tailhook scandal”: eighty-three navy women assaulted or sexually harassed. (That one happened two years before she was born.) That in 1994 Kara Hultgreen also became the first navy female aviator to die, right off the Lincoln’s flight deck­—and that the crash that killed her was blamed on “improprieties” in qualifying her for flight status, “given her gender.”

For Flying While Female, in other words.

And Sally Ride? In a press conference just before that historic first flight in ’83, reporters asked her if space flight would “affect her reproductive organs” and whether she cried when things went wrong on the job.

“Shit fire and save the matches,” was Gram’s comment when Monica told her about it.

Monica was fifteen when she read about that humiliating press conference, and that was the day she formulated the guiding philosophy she’d held to ever since.

She looked in the mirror, gave her hair a few quick brushstrokes, and snapped everything into place with a hair tie.

She opened the stateroom door, ducked her head, and began threading her way through the labyrinth. The nighttime safety lights provided her just enough illumination to see her way, their faint red glow giving the painted steel passageways an even more claustrophobic feel than usual. A lattice of wires, exposed pipes, and conduit brushed by overhead, like strands of web in a giant spider’s lair.

Eerie how quiet it got in here at night.

If you put all the ship’s passageways end to end, Monica’d heard, they would stretch out more than twenty miles. She’d asked her crew chief once just how big a carrier was. He told her about two brothers he knew who’d deployed at the same time on the same ship. From the day they left port to the day they returned seven months later the two never once bumped into each other. “That’s how big,” he said.

More than three thousand ship’s crew, plus nearly three thousand more with the air wing on board: some six thousand souls packed into this steel honeycomb. Like a small city folded in on itself. She’d heard of crew members getting lost even after weeks on board.

Monica never lost her way, not once.

Though she did crack her head a lot those first few weeks.

As she ducked through another doorway Monica thought again­—for the thousandth time­—of the inconvenience her height saddled her with here on the Lincoln. It was like living in a hobbit shire, only this particular hobbit shire was interlaced with a thousand narrow, nearly vertical steel staircases­—“ladders,” in Navyspeak, never “stairs”­—and punctuated by compact, capsule-shaped doorways with openings raised a few inches off the deck, so you had to remember to high-step through. Look down to make sure you cleared the edge and SLAM! Another whack to the head.

She ducked again, then on through a few more doors, down two steep, narrow ladders, and into her squadron’s ready room for a cup of hot Black Falcon coffee. Best coffee on the ship.

Quick op brief, then into the riggers’ loft, where she and the other crew donned their inflatable vests­—“float coats”­—and white flight helmets.

Moments later she was out in the labyrinth again with Papa Doc and two other crew members. Up another steep ladder and through a heavy hatch to the outside­—where they all paused, momentarily immobilized by the blast of saturated heat.

Even at night the Persian Gulf was sweltering.

The four stood for a moment on the steel catwalk, eyes adjusting to the darkness as their bodies adapted to the heat. Looking down between her feet into the darkness, Monica could hear the ocean rushing by five stories below. Sailors who jumped from here with suicide on their minds might hope to drown, but only those few sorry souls who survived the fall got their wish.

She followed the others up the five steel steps and out onto the Lincoln’s massive flight deck, where every day was the Fourth of July.

WHAM! She was expecting it, but still the sound made her jump. A hundred yards from where Monica stood one of the flight deck’s steam catapults slammed against its stock, sending a fighter jet screaming off the bow end of the deck and into the air with a whoosh and disappearing into the dark.

CRASH! A second jet pounded into the deck’s stern to her right, its tailhook snagging one of the four arresting wires strung across the deck like booby traps. The cable shrieked as it stretched out into an elongated V, slowing the jet from 150 mph to zero in a two-count to stop it from careening off the deck’s angled landing strip.

Goggled and green-jerseyed handlers rushed forward to chock and chain the beast. Monica knew them all by their gait and gestures, had each one’s physical signature memorized. Her crew’s lives depended on these guys.

WHAM! Another cat shot, and whoosh! another jet disappeared into the dark.

CRASH! Another 25-ton beast pounded into the deck.