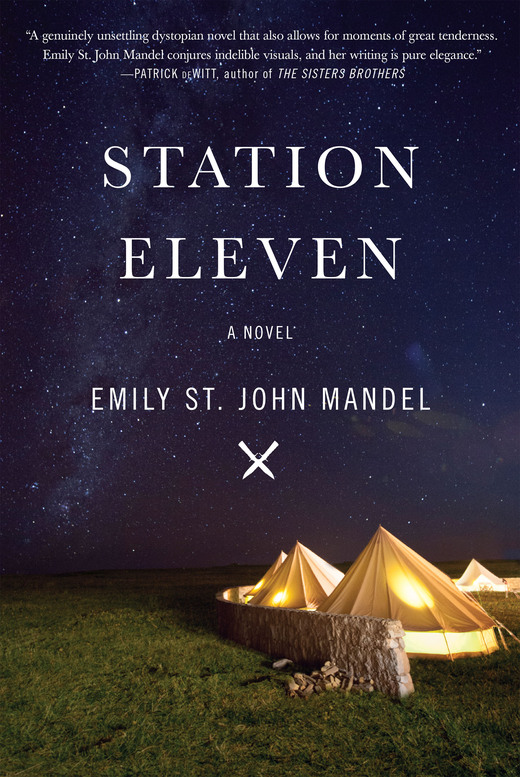 An audacious, darkly glittering novel set in the eerie days of civilization’s collapse, Station Eleven tells the spellbinding story of a Hollywood star, his would-be savior, and a nomadic group of actors roaming the scattered outposts of the Great Lakes region, risking everything for art and humanity.

Kirsten Raymonde will never forget the night Arthur Leander, the famous Hollywood actor, had a heart attack on stage during a production of King Lear. That was the night when a devastating flu pandemic arrived in the city, and within weeks, civilization as we know it came to an end.

Twenty years later, Kirsten moves between the settlements of the altered world with a small troupe of actors and musicians. They call themselves The Traveling Symphony, and they have dedicated themselves to keeping the remnants of art and humanity alive. But when they arrive in St. Deborah by the Water, they encounter a violent prophet who will threaten the tiny band’s existence. And as the story takes off, moving back and forth in time, and vividly depicting life before and after the pandemic, the strange twist of fate that connects them all will be revealed.

Jeevan’s understanding of disaster preparedness was based entirely on action movies, but on the other hand, he’d seen a lot of action movies. He started with water, filled one of the oversized shopping carts with as many cases and bottles as he could fit. There was a moment of doubt on the way to the cash registers, straining against the weight of the cart—was he overreacting?—but there was a certain momentum now, too late to turn back. The clerk raised an eyebrow but said nothing.

“I’m parked just outside,” he said. “I’ll bring the cart back.” The clerk nodded, tired. She was young, early twenties probably, with dark bangs that she kept pushing out of her eyes. He forced the impossibly heavy cart outside and half-pushed, half-skidded through the snow at the exit. There was a long ramp down into a small park-like arrangement of benches and planters. The cart gained speed on the incline, bogged down in deep snow at the bottom of the ramp and slid sideways into a planter.

It was eleven twenty. The supermarket closed in forty minutes. He was imagining how long it would take to bring the cart up to Frank’s apartment, to unload it, the time required for tedious explanations and reassurances of sanity before he could return to the grocery store for more supplies. Could there be any harm in leaving the cart here for the moment? There was no one on the street. He called Hua on his way back into the store.

“What’s happening now?” He moved quickly through the store while Hua spoke. Another case of water—Jeevan was under the impression that one can never have too much—and then cans and cans of food, all the tuna and beans and soup on the shelf, pasta, anything that looked like it might last a while. The hospital was full of flu patients and the situation was identical at the other hospitals in the city. The ambulance service was overwhelmed. Thirty-seven patients had died now, including every patient who’d been on the Moscow flight and two E.R. nurses who’d been on duty when the first patients came in. The shopping cart was almost unmanageably heavy. Hua said he’d called his wife and told her to take the kids and leave the city tonight, but not by airplane. Jeevan was standing by the cash register again, the clerk scanning his cans and packages. The part of the evening that had transpired in the Elgin Theatre seemed like possibly a different lifetime. The clerk was moving very slowly. Jeevan passed her a credit card and she scrutinized it as though she hadn’t just seen it five or ten minutes ago.

“Take Laura and your brother,” Hua said, “and leave the city tonight.”

“I can’t leave the city tonight, not with my brother. I can’t rent a wheelchair van at this hour.”

In response there was only a muffled sound. Hua was coughing.

“Are you sick?” Jeevan was pushing the cart toward the door.

“Goodnight, Jeevan.” Hua disconnected and Jeevan was alone in the snow. He felt possessed. The next cart was all toilet paper. The cart after that was more canned goods, also frozen meat and aspirin, garbage bags, bleach, duct tape.

“I work for a charity,” he said to the girl behind the cash register, his third or fourth time through, but she wasn’t paying much attention to him. She kept glancing up at the small television above the film development counter, ringing his items through on autopilot. Jeevan called Laura on his sixth trip through the store, but his call went to voicemail.

“Laura,” he began. “Laura.” He thought it better to speak to her directly and it was already almost eleven fifty, there wasn’t time for this. Filling the cart with more food, moving quickly through this bread-and-flower-scented world, this almost-gone place, thinking of Frank in his 22nd floor apartment, high up in the snowstorm with his insomnia and his book project, his day-old New York Times and his Beethoven. Jeevan wanted desperately to reach him. He decided to call Laura later, changed his mind and called the home line while he was standing by the checkout counter, mostly because he didn’t want to make eye contact with the clerk.

“Jeevan, where are you?” She sounded slightly accusatory. He handed over his credit card.

“Are you watching the news?”

“That thing in Russia or wherever? I knew about that.”

“It’s here now. It’s worse than we’d thought. I’ve just been talking to Hua. You have to leave the city.” He glanced up in time to see the look the checkout girl gave him.

“Have to? What? Where are you, Jeevan?” He was signing his name on the slip, struggling with the cart toward the exit, where the order of the store ended and the frenzy of the storm began. It was difficult to steer the cart with one hand. There were already five carts parked haphazardly between benches and planters, dusted now with snow.

“Just turn on the news, Laura.”

“You know I don’t like to watch the news before bed. Are you having an anxiety attack?”

“What? No. I’m going to my brother’s place to make sure he’s okay.”

“You’re not even listening. You never listen to me.” Jeevan knew this was probably a petty thing to say in the face of a probable flu pandemic, but couldn’t resist. He plowed the cart into the others and dashed back into the store. “I can’t believe you left me at the theatre,” he said. “You just left me at the theatre performing CPR on a dead actor.”

“Jeevan, tell me where you are.”

“I’m in a grocery store.” It was eleven fifty-five. This last cart was all grace items: vegetables, fruit, bags of oranges and lemons, tea, coffee, crackers, salt, preserved cakes. “Look, Laura, I don’t want to argue. This flu’s serious, and it’s fast.”

“This flu, Laura. It’s really fast. Hua told me. It’s spreading so quickly. I think you should get out of the city.” At the last moment, he added a bouquet of daffodils.