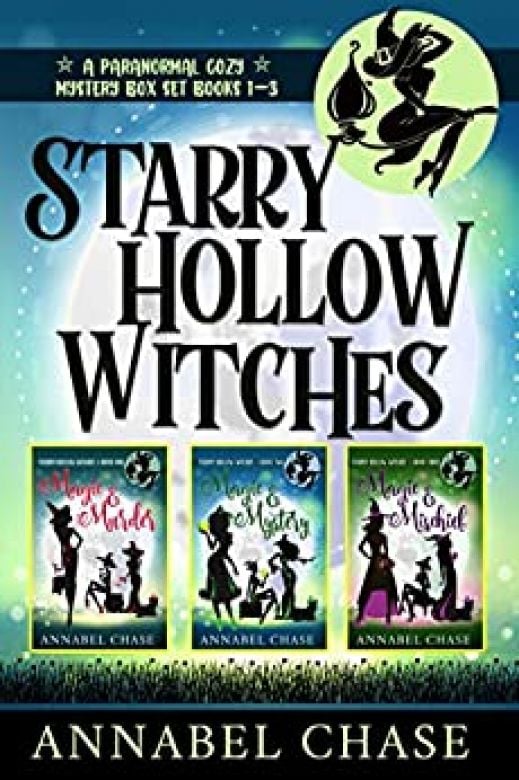 Annabel Chase Founding author
Follow
Welcome to Starry Hollow, where spells were made to be broken.
Genres: MysterySupernatural suspense
Buy now
Available in:

Magic & Murder, Book 1Short on both cash and time, Ember Rose does her best as a single mom in New Jersey, serving up attitude along with repossession notices. When a repo job goes sideways, she and her daughter find themselves in imminent danger--until a visit from estranged relatives turns their world upside down. Ember, Marley, and their Yorkie are transported to Starry Hollow, a paranormal town where witches rule and magic is as normal as pizza. Where Ember goes, though, trouble seems to follow. When a member of the coven turns up dead and the sexy werewolf sheriff identifies Ember as a suspect, she decides to take matters into her own hands like only a Jersey girl can.Magic & Mystery, Book 2Ember Rose, descendant of the One True Witch and New Jersey transplant, is settling into her new life in Starry Hollow, along with her precocious daughter. It doesn't take long before Ember finds herself smack dab in the middle of another mystery. Someone is turning the town's most eligible bachelors into frogs, starting with her cousin Florian. Aunt Hyacinth insists that the newspaper investigate alongside Sheriff Nash because 'everybody knows werewolves track meat, not suspects.' Can Ember manage to catch the culprit or will these young princes of Starry Hollow be trapped as frogs forever?Magic & Mischief, Book 3When a handful of Starry Hollow residents experience their worst nightmares in real life, witch-in-training Ember Rose must use her budding journalist skills to figure out the who, what, why, when, where and how before it's too late. With both Sheriff Nash and Alec, her editor-in-chief, affected, the stakes have never been higher.Will she manage to stop the curse before her own worst nightmare comes true?These are full-length, humorous cozy mystery novels.Other books in the series include:Magic & Mayhem, Book 4Magic & Mercy, Book 5Magic & Madness, Book 6Magic & Malice, Book 7Magic & Mythos, Book 8