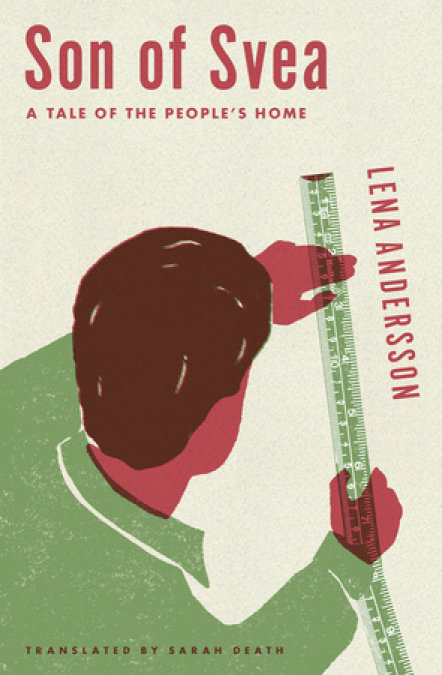 From one of Sweden’s most astute cultural critics, a razor-sharp comedy of the progress and ruin of the industrial welfare state, told through the story of a single family.

Ragnar Johansson is born in 1932, a transformative moment in Swedish history. He has Swedish social democracy flowing through his veins—convinced it lifted humankind out of the dark ages and into modernity, he cherishes it. At times Ragnar despises his mother, Svea, whose perpetual baking, scrubbing, and canning represent the poverty of the peasantry. Ragnar, for his part, hails the efficiency of washing machines and prefab food. Once he has children himself, he raises them in accordance with his values, standing in the ski track supporting his daughter Elsa as she works hard to become one of the best skiers in the country. While Svea is a relic of the past, Elsa represents hope for the future. In time, however, Ragnar realizes that the world is changing. Is his golden age coming to an end?

In Son of Svea, Lena Andersson offers a characteristically funny, wise, and moving family chronicle about the social transformations that unite and divide us, and about finding the courage to be true to oneself.

Towards the end of the year 1999, an ethnologist from the University of Uppsala advertised for people—while there was still time, for their numbers were dwindling—to provide the raw material for her research on the Swedish mentality in the age of modernity.
At that point, Elsa Johansson was twenty-nine years old. She wrote a letter to the ethnologist to propose her father, a retired craftsman. His daughter was of the opinion that he was wasting away, leading far too quiet a life in Vällingby, in the northwest outskirts of Stockholm, where none of his considerable talents were being put to use.
Her father was so suitable for the research project, she wrote, that he would never dream of volunteering for it. “That sort of self-awareness would presumably disqualify anyone from what you are trying to explore. Your selection would be distorted if you only took people who think they fit your description.”
Elsa was doing a PhD in linguistics and was thus rather preoccupied with problems of research methodology.
After three weeks, there was a reply from the ethnologist. She would be happy to meet Ragnar Johansson for an exploratory chat. It was only then that Elsa told her father about it. He was doubtful and disposed to be negative, but Elsa was prepared for this and had worked out how best to get him interested. She explained that it was to do with Sweden as a former role model for the world, about the nation’s illustrious past, in which he had played a small but important part.
“If I can contribute something it might be a good thing, then,” said her father, “though I don’t understand what I could have to say that a scholar like that doesn’t already know.”
Elsa wrote to the ethnologist and suggested a meeting at the Pallas Café in Vällingby. The café had been there ever since they built Vällingby in 1954, when people came to visit from all over, to study a suburb of the future that had become a reality in their own age, thought-out in every functional, elegant detail as well as in the reverential effects of the whole on the democratic individual.

It was Elsa who called Ragnar with the news that the research project the ethnologist had told them about was not going ahead after all. By then he had virtually forgotten the meeting at Pallas, and was indifferent to this development. But when, out of politeness, he asked why that was, Elsa said it was quite hard to explain.
“There’s a long answer and a short answer. The long one is that the ethnologist’s supervisor criticized her from the word go for trying to reproduce essences in so-called reality outside discourse.”
“That sounds complex. What does it mean?”
“The People’s Home, for instance, which she wanted to write about as a kind of mental state, taking you as an example . . .”
“Yes?”
“It doesn’t exist. The People’s Home doesn’t exist.” Ragnar cleared his throat several times.
“In what way doesn’t it exist?” “In the sense that it’s a construct.” “Aha. Yes.”
“She also said she had come to realize that Ragnar Johansson, i.e., you, didn’t really have what was expected of contemporary research in her field.”
“But I said that all along. I said it right from the beginning, didn’t I?”
“Yes, you did. And that’s why she’s starting another thesis instead, on how, and I quote, ‘the weakest citizens of the so-called People’s Home were portrayed as aberrant and abnormal in parliamentary bills in the years 1932–45 and 1969–86.’”
“That’ll be fine, I’m sure,” said Ragnar.
“It’ll get her a grant, at any rate. And a lot of attention.” “You know these things you talk about are way too difficult for me, Elsa. All these things you do. What was the short answer?”
Elsa gave this some thought. “That you’re too ordinary.”
“Good,” said Ragnar. “I’m happy with that.”

This is the story of a twentieth-century Swede. A man without cracks but with a great split running through him, and in this he entirely resembled the society he populated and shaped.
Ragnar Johansson was Swedish; he was the archetypal Swede. Elsa said that to him once, and he knew she didn’t mean it as a compliment. Swedes found it ridiculous being Swedish, he had come to realize. The Swede was a country bumpkin of earthy simplicity. Those who voiced an opinion of the Swede did not consider themselves among his number but inhabited the thin stratum of abstractions in the air high above, where admittedly they spoke Ragnar’s mother tongue but used it mainly for conveying to simpler souls precisely how simple they were, and how erroneously they thought and acted.
Ragnar’s mother Svea’s maiden name was the archetypally Swedish Svensson. Her brother’s name was Sven. But ordinariness was a virtue, and Ragnar had no intention of apologizing for the fact that his mother’s side of the family sounded as though they came from a primary-school reading book.
Sven and Svea Svensson were born, lived, and died in Svea rike, the kingdom of Sweden. As children they lived in Götaland, the most southerly of the three traditional lands of Sweden. In adulthood and old age they lived in the middle, in Svealand. Their parents’ names were Johannes and Linnéa.
After their five years of elementary education in Glömminge, on the island of Öland, they were taken on by two separate farms in the area, he as a hand and she as a maid. When Svea was nineteen and Sven twenty-one, they traveled to the capital city together to look for work. Sven became a bricklayer, and Svea kept house for three rather well-to-do sisters in the smart district of Östermalm, where they shared an apartment on Narvavägen.
Svea was pleasant, dependable, and trustworthy, and within a few years she was married to Gunnar Johansson, the owner of a small haulage company. Sven, too, married above his station, to a woman from a farming family in the province of Ångermanland. Her name was Märit, and she had a lopsided mouth, which with nature’s sense of proportion corresponded to a slight limp. There was also a hint of something corrosively surly in her manner that only corresponded to her deep sense of dissatisfaction, prompting suitors of her own social class to opt for other candidates. Märit Lind had to make do with Sven Svensson, an active trade unionist and member of the Swedish Social Democratic Party.
The girl from the solid farming background realized that with her congenitally crooked body she just had to make the best of it, but she found her husband’s gracelessness and poor-man’s ways such an affliction that she never let Sven forget that she had married beneath her, not him. The pair lived their whole lives in a tiny flat in the district of Abrahamsberg, with a kitchen so small that they could barely sit down together to eat. It was Sven who had to stand. As often as he could, he would go across town to see his sister Svea in Birkastan and eat her pork and potato dumplings, like they used to have on Öland. She would always make a vast number of dumplings, grating potato until she was worn out, and then they would eat them and talk about things only the two of them could remember.

Svea felt no sadness at exchanging Svensson for Johansson when she married Gunnar. The son they produced together, the subject of this story, was born the following year, year zero in Swedish history, the year Social Democracy came to power in the country and took over Protestantism’s all-embracing mantle of care, severity, and the tendency for self-flagellation, both individually and collectively, which it would then occupy uninterrupted for forty-four years, fundamentally transforming Sweden.
Johansson’s little haulage company did reasonably well, and Svea and Gunnar toiled from morning to night. On Sundays they were able to take things a little easier, but the horses had to be fed and watered every day of the week, so they didn’t get a proper rest then, either. Fear of the business failing was always there, but Gunnar was occasionally entrusted with some particularly responsible task, which lent a shimmer to their days—like the time he was in charge of clearing the snow in front of the main government building when the prime minister of Norway was visiting their own Per Albin Hansson. Gunnar was even in a photograph that was published in Stockholms-Tidningen. Svea’s husband was a contented man, satisfied with life and his allocated place in it. All he wanted was to run his modest business in a way that brought his family enough to get by. For a short period, they had two boys. The first-born, whom they called Ture, was delicate and sickly and died when he was two years old, just after Ragnar arrived. Ragnar, by contrast, was strong and healthy, and already weighed five kilos when he was born.
On Sundays, Mother Svea was able to sleep in until seven and had plenty of time to sit over her morning coffee, thinking about things to the sound of the old wall clock, and then to dress in her best for the church service at eleven.
She had to go to church alone, because Gunnar was an atheist.