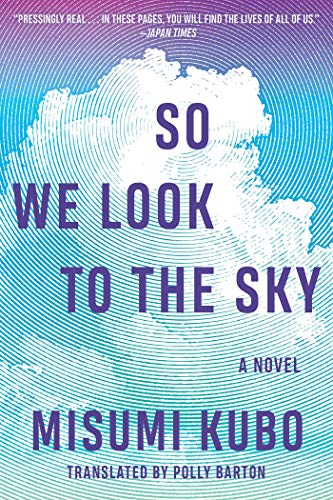 So We Look to the Sky

This shocking, boisterous novel was a runaway bestseller and award winner in the Japan: “Pressingly real . . . In these pages, you will find the lives of all of us” ( Japan Times). Searingly honest and sexually explicit, So We Look to the Sky is a novel told in five linked stories that begin with an affair between a student and a woman ten years his senior, who picks him up for cosplay sex in a comics market. Their scandalous liaison, which the woman's husband makes public by posting secretly taped video online, frames all of the stories, but each explores a different aspect of the life passages and hardships ordinary people face. A teenager experimenting with sex and then, perhaps, experiencing love and loss; a young, anime-obsessed wife bullied by her mother-in-law to produce the child she and her husband cannot conceive; a high-school girl, spurned by the student, realizing that being cute and fertile is all others expect of her; the student's best friend, who lives in the projects and is left alone to support and care for his voracious, senile grandmother; and the student's mother, a divorced single parent and midwife, who guides women bringing new life into this world and must rescue her son, crushed by the twin blows of public humiliation and loss, from giving up on his own. Narrating each story in the distinctive voice of its protagonist, Misumi Kubo weaves themes including family, sex, the female body, the bullying that leaves young people feeling burdened and helpless, and the roles women are assigned by society into a profoundly original novel that lingers in the mind for its affirmation of the raw, unquellable force of life.