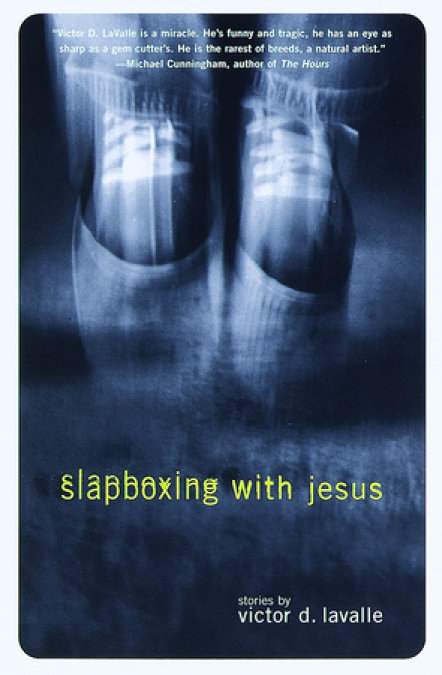 Twelve original and interconnected stories in the traditions of Junot Díaz and Sherman Alexie. Victor D. LaValle's astonishing, violent, and funny debut offers harrowing glimpses at the vulnerable lives of young people who struggle not only to come of age, but to survive the city streets.

In "ancient history," two best friends graduating from high school fight to be the one to leave first for a better world; each one wants to be the fortunate son. In "pops," an African-American boy meets his father, a white cop from Connecticut, and tries not to care. And in "kids on colden street," a boy is momentarily uplifted by the arrival of a younger sister only to discover that brutality leads only to brutality in the natural order of things.

Written with raw candor, grit, and a cautious heart, slapboxing with jesus introduces an exciting and bold new craftsman of contemporary fiction. LaValle's voices echo long after their stories are told.

So it was me, my boys and two new kids, Mark and Chuckie. All of us were heavy with equipment, the two new fellas with bikes. Saturdays parents existed only when we woke up and went to bed, the long line of hours in between were just baseball, baseball, baseball. We'd decided to stretch over to that park in the Italian neighborhood; the one near us was full.

Baseball diamonds had been etched into the park, three separate plots. It was easy to find little ponds all over; like everything in Flushing they looked good from a distance. Only coming closer could you spy their murky gray insides. In the summers, very faintly, they emitted paint fumes. It was getting dark. That's how night arrived then, bothering you all at once, bursting into the room. One of us said, --Let's get the fuck out of here. We weren't Italian. Not even Mark. Not even Chuckie. This is not to say I had no Italian friends, our neighborhood was a mash of origins, but still, there were intricate politics. This was 1982. You knew where you could be and when.

We gathered up our mitts and balls and both aluminum bats Jung had carried on his wide shoulders. Half a block traveled and I had to run back for the left-handed glove Mom bought special after searching through six different Modell's for a first baseman's. Then I chugged back to the guys on their feet, ahead of them Chuckie, Mark and the bikes they'd rode in on, these dope silver Huffys. Those two had learned how to do spins, other tricks, and instantly I hated them like I did all my boys: secretly. Those ties didn't mean much to me. When you stopped speaking to some kid there would be another; one thing Flushing had in abundance was people.

Ahead, Mark was screaming. For us. Chuckie too. We got closer quickly. Beyond them all the setting sun's flames were running down to an orange gasp on the horizon. Two sweaty boys gripped one set of handlebars each. They were old enough to buy beer. Smiling and Laughing, that might as well have been their names. One said, --Come on, let us ride them once.

Mark said, --I gotta get home, man. He sounded like he was going to cry.

--Me and my friend just want to ride around the corner, said the other one. Smiling.

--We gotta help them, Jung pleaded. He had invited them along so what else could he say? We weren't fifteen feet off. The two thieves hadn't noticed us, didn't look even as we crossed the street: moving away. Chuckie and Mark were on their own.

The trees all around had been season-stripped of every leaf; pulsing winds made the branches crash and shake like hands applauding. Mark turned to us, then Chuckie, they took a moment to stare. Only the arms of the older duo moved as they tugged and jerked the bikes. We heard yelling. The chain-link fence surrounding an old home swayed loosely, its rattle a language. --Guys, Jung tried again. We should really go over and help.

--Will you shut the fuck up, I said. I was afraid the way people must be during a hurricane, thinking, Will it come for me? I had seen fights, started and lost them, I wasn't a novice. But this was a beating.

Mark was thrown off his bike. Next Chuckie. Then the tall one was kicking Chuckie in the head. Mark got up and ran--not toward us, just away. I couldn't tell you how long those guys worked on Chuckie. It was a few minutes. Even one or two are very long. The blood started coming. I didn't know a face had so much. Helping was still an option for the others, but not me; it could have been Jung getting beat, my own father; many people would call me the betrayer, often, but that was because they'd mistaken me for a friend when I was just hanging around. There was only one kid I ever cared for and his name wasn't Chuckie. It wasn't any of these guys.

When a loud -pop- echoed from across the street I didn't flinch, wasn't even sure it had come from nearby.

Ten is too young to learn how you are. That you wouldn't run for the ambulance, as all my friends did, while Chuckie clutched at his eye like his very own soul was in danger of escaping. Booth Memorial didn't send an ambulance quickly. To the right, in the park, squirrels appeared, ruthlessly picking at the ground for food; from where I stood their quick little hops were even more graceful; when they ate energetically they seemed to be on their knees, paws forward in a frantic prayer.