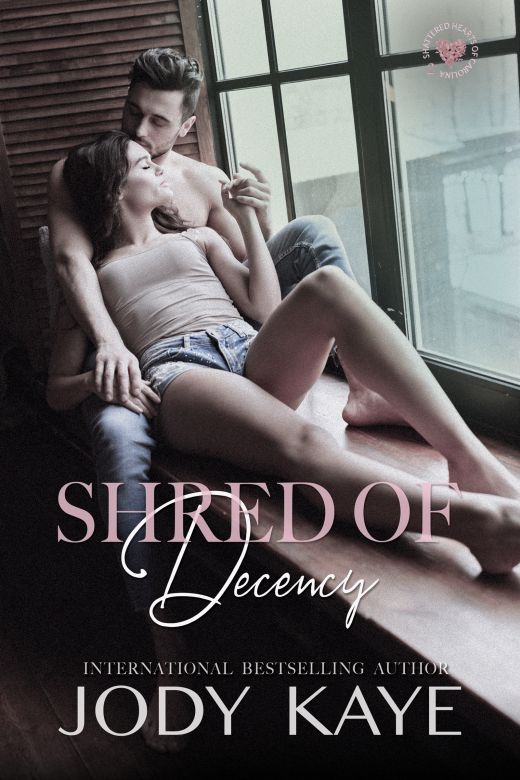 Book 2: Shattered Hearts of Carolina
Jody Kaye
Follow
Aidy and Morgan are both looking for a fresh start. When fate brings them together, can they find a way to hea
Genres: New Adult & CollegeContemporary RomanceNew Adult RomanceSmall-town RomanceSports Romance
Buy now
Available in:
Share

It’s my word against his, and understanding the risk of someone finding out what happened to me is a hard pill to swallow.

When the pain and loneliness becomes unbearable, I run into the most unlikely person capable of stopping my world from caving in… A decent man, who spent time behind bars.

No one believes Morgan has much to offer anymore, not even him.

But this once? I know better.

Morgan is looking for a fresh start too. I rely on his friendship while learning how to feel safe again. Yet the closer we get, the more I question how often the punishment fits the crime.

**This book contains sensitive scenarios that may trigger readers. Please consider reading reviews or contacting the author if you have questions.

“Hi, is this Aidy?” a pleasant voice asks when I pick up my phone. It’s the nurse from the clinic.
I’d been so wrapped up figuring out what the hell my lecture today had covered answering was automatic.
“Ye-Yes.” I clear my throat and she reminds me of who she is. Like I’d forget.
“I want to start by saying my call is not to pressure you. I wanted to check and make sure you were okay.”
“I’m fine.” I lie the same way I tell my roommate I’m all better from whatever bug I’d caught.
“Good to hear, sweetheart. If you need someone to talk to—”
“I won’t.” I cut her off.
“It’s okay, Aidy. I don’t mean now, maybe in the future? I’m here. There’s also the campus counseling center and, if you’d rather go someplace else, I have a list of private and group support resources.” A lot of what she’s saying was information provided each time I’d seen her. “You aren’t alone. You’re not the only woman this happens to.”
Her last sentence is too much and I hang up on her as she’s babbling on about a great survivor network in Brighton.
My biological mother, Kimber, lives in Brighton with her husband and their new baby. Kimber was eighteen when she gave birth to me. She chose a wonderful couple to become my parents. For most of my childhood, I reaped the benefit of an open adoption. Kimber showed up at my birthday parties and we sent letters and cards on holidays, or rather, my mom did for me.
The same mom whose texts I reply to with an exaggerated “I’m soooo busy”, “I’m soooo tired” or an appropriate emoji to make her think I’m not failing all four of my classes the third week of school.
I’ve always been able to go to my mom with anything. Right now, I don’t want to see or talk to her. Kimber’s on my mind.
We became close after I turned eighteen. However, I’ve never asked Kimber who my father was. Until recently, it hadn’t seemed right for me to pry into her personal business. I do know she was younger than I am now, and made her choices alone during a time in her life wrought with emotion. I’ve always feared my life began because of someone more sinister and, not knowing the truth, meant there was still the possibility I was conceived by two people who loved one another. Now, more than ever, I’m left wondering if Kimber experienced what I did. I couldn’t bear for it to be the reason a child of mine existed. And, for as cherished as my mom and dad made me feel, I’m not sure I’d be able to give away someone who grew inside of me to anyone.
Kimber is so much stronger than I am. There’s no way something like this happened to her.
I go back to highlighting a textbook and realized the entire page is yellow. I’ve been dragging the marker from one paragraph to the next without reading.
“Great,” I mutter, tired of the constant distractions my thoughts cause.
I rub my eyes and reach up to my desk to snag a rubber band to pull my hair into a ponytail. A few purple flyaways get tucked behind my ear.
“Concentrate.” School has always been easy. I’ve never been so far behind. Or so tired. I refuse to touch my bed.
As if I’ve conjured her, my cell dings on the hard floor beside me.
Kimber: Hey Dumplin’! Can you call me when you’re out of class?
I scroll my contacts and call her right back.
“That was fast!” I catch bass thumping in the background. The music ebbs away, but Kimber’s enthusiastic voice carries on. “It’s not a huge emergency, but Trig’s out of town and our don’t-want-to-disturb-Dumplin’s-studies-sitter is busy.”
I beam. “You have a back-up sitter?”
“Of course, we do. I don’t want to bug you when you’re supposed to be off having a good time.”
“It’s never a bother.”
Owen grows like a weed in between my visits. Her having him excited me. I was an only child and, while Ghillie and Don Fairley aren’t ancient, they are older than most of my friend’s parents. It’s also not as if my mom and dad were ever having more kids. Owen is the only sibling I’m getting.
“I know you’ll never say no even when you should and it’s why I keep someone else’s number handy.”
True. After Owen was born, I sort of went baby-crazy and volunteered to watch him every chance I got.
“Anyhow,” Kimber continues, “I have plans with Sloan I’m trying to salvage for tomorrow. If you can’t do it, don’t worry.”