Book 1: Scribbler Tales
Mary Ann Bernal
Follow
Love drives the actions of these men and women to drastic measures, but in the end, was it worth it?
Genres: Short StoriesParanormalAnthologiesPsychological ThrillersSuspense
Buy now
Available in:

I think that this collection really showcases her talent and diversity as a writer. Anyone can make a decent story when they have hundreds of pages to play with, but to create short stories that blow your mind in the few minutes it takes to read them is a true challenge. A challenge that Mary Ann Bernal completes with ease. I am eagerly awaiting the next volume of The Scribbler Tales.

In Desperate Measures, Audrey learns of Paul’s duplicity when human cloning experiments go awry.
Forbidden Lore beckons Arianna and Ethan into a haunted cemetery where they are confronted by a gathering of witches with evil intent .
Adrian must challenge his father to marry Rina or suffer the fate of star-crossed lovers in Forever Lost.
In The Hourglass, Flair makes a covenant with the Devil to keep Brice alive.
Aaron reflects upon his childhood as a military brat in Sail with Me. 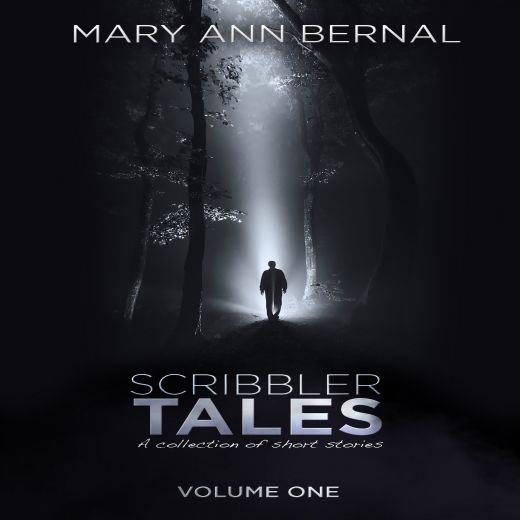 Audrey stood on the ledge of the roof overlooking the flower beds as a gentle breeze carried the pleasant fragrances across the well-kept lawn.  She should have seen through the deception, but then, hindsight is an excellent teacher.  His betrayal had stung, affecting her very soul because she had believed him, refusing to recognize his faults, and there were many. Paul had seduced her, even though she had been a willing participant, believing his every word.

“Paul is too selfish with an ego the size of Texas!  Whatever were you thinking?  Father was right ... I am book smart, but not streetwise,” Audrey thought.  “How could I have been so blind?  Yet isn’t love blind ... and deaf ... and dumb?”

Night was setting upon crumbling headstones.  The centuries old cemetery was forgotten by most people, except for the High-priestess whose ethereal presence heightened the fear of those who dared walk the burial ground in the darkness.

Arianna was becoming concerned as shades of twilight enveloped the countryside.  They had been warned the graveyard entrance was locked at dusk. If they did not return to the car now, right at that moment, they would be trapped.  How would they survive until morning?  There had been stories, but maybe that was what they were ... just stories.  Yet walking through the knee-high grass in a clearing surrounded by willow trees and ancient oaks was unsettling. She sensed a malevolent spirit lurking within the shadows, awaiting release at sunset.

Massive waves broke upon the deserted beach, the pounding surf crashing against the jagged rocks beneath the massive cliff that dominated the landscape.  Soft silver moonlight illuminated the darkened night, and a gentle sea breeze moved inland, cooling the stagnant air.

Rina stood at the water’s edge, devoid of emotion as she stared at faint flashes of lightning on the horizon while glimmering frothy waves caressed her bare feet, and a sea mist sprayed her face, its salty taste lingering on her lips.  A strong wind whipped her tattered clothing around her slender body, her shoulder-length hair lashing her tear-stained cheeks while droplets of blood fell from her fingers upon the wet sand.

Standing before the World War II Memorial, I was humbled by this monument to the American spirit from a grateful nation.  I reflected on the names, imagining their existence before the throes of warfare shattered their world.  I pondered on their childhood, wondering about their parents; were they civilians or members of the Armed Forces?  And did they survive their upbringing unscathed only to give their lives for the greater good?

After bearing witness to these truths, of their courage and commitment to fight against tyranny, did I have the right to complain about my early years?  Yes, our soldiers have fought and died so I may speak my thoughts freely, without fear of reprisal.  I am a captain in the U.S. Navy who also happens to be a military brat.  My name is Aaron, and this is my story.

Flair opened her eyes and glanced upon the sand sifting through the hourglass as her life ebbed away.  She was grateful for the moonbeams that filtered through the solitary window as she pondered her fate in the darkened chamber while watching the crystalline particles trickling ever so slowly through the slender neck into the lower chamber. Her breathing was raspy, her body racked with pain as the contagion spread throughout the mortal vessel that held her soul.  She knew in her heart there would be no escape, and Death would claim her for himself, yet she had no reservations about honoring the terms of her covenant with the feared reaper because Death had kept his word and Brice thrived.