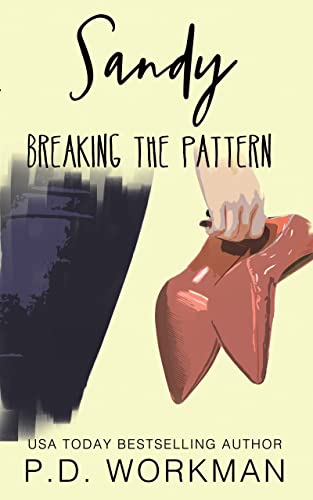 Raised to a life of crime, Sandy is a teenage prostitute, junkie, and con artist. She always joked that her Da taught her a trade, that it hadn’t hurt her to be brought up like she was.

But things keep getting more complicated, more dangerous, and Sandy doesn’t want to admit even to herself that she longs for an honest, normal life.

Even when she tries to change, things don’t go smoothly. Sandy’s past keeps interfering with her new relationships. In the end, if she and her family don’t pull together, Sandy will not be able to escape yet another ghost of her past.

Do they have what it takes for her to change her life completely?

⭐️⭐️⭐️⭐️⭐️ If you love stories with strong female protagonists who fail forward to become a better version of themselves, this story will capture your heart. Sandy was an unforgettable character. I lost hours in this book!

By the author of Tattooed Teardrops, winner of the Top Fiction Award, In the Margins Committee, 2016, Sandy’s hope for a better life will touch your heart and keep you rooting for her right to the end.

If you enjoy gritty contemporary young adult books like those by John Green and Stephen Chbosky, give P.D. Workman’s Breaking the Pattern series a try.

Start your journey with Sandy today!

I didn’t really now anything about Sandy when she first showed up in Henry, Breaking the Pattern. She had the minor role of Marty’s half-sister, keeping Henry away from their mother with his dirty money. But Sandy’s role in Henry’s life grew and became more important, and as bits of her history and upbringing were revealed, I became more interested in delving into her life and how things might work out for her.

Like Henry, Sandy is caught between two lives. Henry was trying to stay out of trouble, but it kept finding him. Sandy has been raised to a life of crime, but maybe there is something better out there for her.

Can Sandy break the cycles of crime, addiction, and poverty that she was raised in?

Sun streamed through the dingy windows of the hospital onto the white sheets of the bed and curtains. Mol held the squalling pink bundle out to Rene. Rene took the baby and jiggled her, gazing down at her. She had a fuzz of rusty orange hair covering her head. Her eyes, though blue, were dark, shifting a little under the light, making him think that they would turn out to be green or brown.

“Very,” Mol agreed, wincing. “Now, you tell me now if you’re going to look after her, because I’ll just give her up if not.”

He shook his head. “No, I will look after her.”

“How can you look after her? What do you know about babies?” Molly demanded.

The baby’s sobs were gradually slowing as he jiggled her.

“I know all about feeding and changing. What else is there?” Rene said flippantly.

“Plenty. And don’t you be calling me every time you have a problem. One kid is more than enough for me. I’m not going back to diapers.”

Rene looked down at the baby girl. She had stopped crying and her stormy eyes stared at him with a focus and intensity far too old and wise for a newborn. Rene gave her a satisfied smile.

“I have big plans for you, little girl,” he promised. “Big plans.”

A couple of years later, Mol saw Rene at the grocery store. Usually, they just ignored each other, but this time he approached her.

“That’s her,” Rene said to the solemn little redheaded toddler sitting in his shopping cart. “That’s your mom.”

Mol looked at Rene with a frown.

“What’s all this about, then?” she questioned.

“She’s been asking who her mom is.”

Mol looked at Sandy for a moment and shrugged.

Years would pass before Molly would voice to Sandy her regret that she had ever put Sandy into Rene’s custody.

Sandy watched herself in the mirror as she brushed her long red hair. She assessed herself critically, studying her hair, makeup, and outfit. Examining her legs and stomach for any extra weight, carefully evaluating everything. Her pager went off, and she silenced it without looking and finished brushing her hair. Sandy put down the brush and looked at the number on her pager. She didn’t recognize it.

She really should be hitting the street, but she shrugged off the momentary guilt at delaying, and made the call.

“Who’s this?” she questioned.

Sandy swallowed. Henry had given her name to Denzel as his emergency contact.

“Is Henry okay?” she questioned.

“He’s well… but he’s in some trouble.” Denzel sounded grave.

“There are some officers who would like to talk to you. They want to talk to people who know Henry. You’re the only one I know about.”

“I’ll get there on my own. What precinct? Downtown?”

Sandy ended the call and stood there wondering what Henry had managed to get himself into. She assessed her outfit and decided she’d better tone it down. After slipping out of the mini skirt into a pair of blue jeans and pulling a crocheted sweater over the midi, she picked up the phone again and called Marcia.

“You sick or slacking off?” Marcia challenged.

“Got a last-minute call.”

“Okay, girl. Thanks for letting me know.”

Sandy stood around waiting for Aberdene. He eventually showed up, looking around and picking her out.

“Yeah.” She looked at his name tag, which designated him a detective.

“So, what’s Thomas got himself into?” she questioned.

“You know him by his real name,” he observed.

Sandy shrugged. Thomson. He was Henry Thomson now. He was always reminding her.

“Come sit down with me, we’ll talk,” Aberdene invited.

Sandy went along with him. She caught him looking at her sidelong a couple of times. She looked to see whether all of her buttons were done up, and then ignored his looks. He took her to a conference room and sat her down. They were joined by another detective named Bentley. Sandy saw startled recognition in his eyes. She didn’t recognize him; but she met many men and only really remembered the regulars.

“So, what’s this about?” she questioned again.

“Your friend Henry is under arrest for murder,” Aberdeen said.

It was so completely unexpected, Sandy wasn’t able to suppress a gasp at the information.

“Murder?” she repeated in disbelief. “You’ve got the wrong guy!”

“What makes you think that?”

“Henry? Who would he kill?”

Bentley slid a photo across the table toward her. Sandy looked at the picture of the blond. A candid shot, soft edges, glamorous.

“Is that one of Henry’s photos?”

Bentley nodded. Sandy studied her face. “I’ve never met her. Was she… his girlfriend? Or a stranger?”

“The one from school?”

“Why? Why would he kill her?” Sandy still couldn’t believe it. Not Henry. She knew a lot of guys who were violent, who she wouldn’t doubt for a minute could kill. But Henry? That baby face?

“This one… we’re not quite sure why,” Aberdene said. “The others… it appears that people started to get suspicious, noticed him hanging around where he shouldn’t be.”

“The others?” Sandy repeated.

“There were others,” he confirmed.

Sandy swallowed. She looked from one cop to the other.

“He’s not a killer,” she affirmed. “He hasn’t been killing girls.” Then suddenly, everything connected and Sandy felt nauseated. “Oh, no…!”

They waited for her to go on. Sandy cleared her throat, trying to keep her voice steady.

“What makes you suggest that?” Bentley questioned sharply.

“There hasn’t been any other series of unsolved murders, has there?”

“Even those girls haven’t been identified as a series,” Aberdene pointed out. “How do you know about that?”

“Because I’m in the business,” Sandy said in exasperation, “and we notice when other girls are being killed, even if no one else does. So, is he the one? Is he the one killing them?”

Bentley laid down a series of other photos on the table. Sandy touched a couple of them.

“Katelyn… Josie… are you sure Henry did this?”

“He has their pictures. They’re dead. He admits it.”

Sandy swore; she couldn’t believe it. How could it be him?

“Henry has had two other prior murder charges, you know,” Aberdene pointed out.

“Two? I only knew about one. He was in juvie with my brother—but someone else confessed to it.”

Sandy shook her head. “I just… can’t believe it.”

“We’d like to ask you some background questions about Henry, okay?” Aberdene said.

Bentley held up his hand. “Hang on one sec,” he told Aberdene, and delved into his portfolio, looking for another series of pictures. He shuffled through them, and pulled a few out, handing them to Sandy.

Sandy looked down at pictures of herself. Her stomach lurched. They were pictures she never knew Henry had taken. Head shots, full length, pictures through her window, down the street, laughing with a friend, meeting a client, even one of her shooting up, totally unaware she was being observed. He must have used a telephoto lens.

“You could have been next,” Bentley said.

“I never knew he was taking those,” Sandy said. Her stomach lurched, and she put her hand over it. “Oh man… I’m gonna be sick…”

Aberdene stood up. “Let’s take a break. I’ll show you to the restroom.”

Sandy splashed water on her face and took a few deep breaths, trying to settle her nerves and clear her mind. So what if Henry Thomas was a serial killer?

It wasn’t as if they were that close to each other. He’d never been her type. He was a loser. Sure, she’d taken him under her wing when he was hurt and sick, she felt sorry for him and his baby brother. He didn’t have anyone else.

That was all over. He was going away for a long time now.

Sandy stepped out of the room and looked around. Aberdene was talking to another cop and made a sign indicating that he’d be with her in a couple of minutes. Dr. Denzel was sitting in a lobby at the end of the hall and Sandy walked down to talk to him. He looked as sick and gray as Sandy felt. He saw her and stood up to shake her hand.

Denzel nodded. They sat down.

“Henry told me,” Denzel said, pain in his eyes.

Sandy stared at him in shock. Denzel knew back then, months ago?

“He was on a new medication when he told me,” Denzel explained further. “He was uninhibited, his associations were very loose. I thought it was a psychotic break.”

“I didn’t believe him,” Denzel said. “I thought it was his imagination. A hallucination.”

“You couldn’t have known.”

“How could anyone have known?” Sandy protested. “I even talked to him about them! About the girls getting killed. He never acted suspiciously.”

“I knew more about him than anyone. I knew his family history… his mom’s mental illness and her tendency to pick abusive partners… I knew all her worries about him, but he always seemed like such a responsible, mature kid… I never took her concerns seriously…”

He put his face in his hands, shaking his head and breathing raggedly.

Sandy sat there wondering what she could say or do to comfort him. She understood the guilt. She felt it too. They sat in silence, both at a loss, in shock over the development.