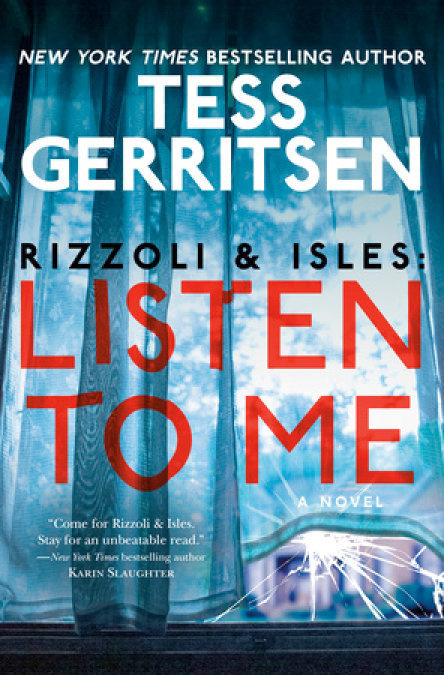 Rizzoli & Isles are back! From New York Times bestselling author Tess Gerritsen, this “shocking and fast-paced” (Karin Slaughter) thriller has Jane and Maura investigating a brutal murder with dire implications, and this time, with Jane’s intrepid mother, Angela, looking into a mystery of her own.

“Absolutely first rate—readers will be thrilled and delighted by this new Rizzoli & Isles outing!”—Shari Lapena, New York Times bestselling author of The Couple Next Door

Mothers know best . . . But who will listen?

Boston homicide detective Jane Rizzoli and medical examiner Maura Isles are newly plagued by what seems like a completely senseless murder. Sofia Suarez, a widow and nurse who was universally liked by her neighbors, lies bludgeoned to death in her own home. But anything can happen behind closed doors, and Sofia seemed to have plenty of secrets in her last days, making covert phone calls to traceless burner phones. When Jane finally makes a connection between Sofia and the victim of a hit-and-run from months earlier, the case only grows more blurry. What exactly was Sofia involved in? One thing is clear: The killer will do anything it takes to keep their secret safe.

Meanwhile, Angela Rizzoli hasn’t had a decent night’s sleep in all the years since her daughter became a homicide detective. Maybe the apple didn’t fall too far from the tree: Nothing in Angela’s neighborhood gets by her—not the gossip about a runaway teenager down the block and definitely not the strange neighbors who have just moved in across the street. Angela’s sure there’s no such thing as coincidence in her sleepy suburb. If only Jane would listen—instead she writes off Angela’s concerns as the result of an overactive imagination. But Angela’s convinced there’s a real wolf in her vicinity, and her cries might now fall on deaf ears.

With so much happening on the Sofia case, Jane and Maura already struggle to see the forest for the trees, but will they lose sight of something sinister happening much closer to home?

I should have worn my boots, she thought as she stepped out of Snell Library and saw the fresh layer of sleet and slush covering the campus. When she’d left for school that morning it had been a balmy forty-­nine degrees, one in a string of springlike days that made her believe winter was finally over, and she had come to campus wearing blue jeans and a hoodie and brand-­new pink flats made of buttery leather. But while she’d been inside all day working on her laptop, outside, winter had come roaring back. Now it was dark, and with this frigid wind sweeping across the courtyard, the pavement would soon be as slick as an ice rink.

With a sigh, she zipped up her hoodie and hauled her backpack, heavy with books and her laptop, onto her shoulders. There’s no way around it. Here we go. Gingerly she descended the library stairs and landed ankle-­deep in slush. Her feet now wet and stinging, she forged ahead down the path between Haydn Hall and Blackman Auditorium. Well, these new shoes were ruined. Stupid, stupid. That’s what she got for not checking the forecast this morning. For forgetting that March in Boston could break a girl’s heart.

She reached Eli Hall and suddenly stopped. Turned. Were those footsteps she’d heard behind her? For a moment she stared at the alley that cut between the two buildings but all she saw was the deserted walkway, glistening beneath the lamplight. Darkness and bad weather had emptied out the campus and she heard no footsteps now, just the rattle of falling sleet and the distant whish of cars traveling down Huntington Avenue.

She hugged her hoodie tighter and kept walking.

The campus quadrangle was slick and gleaming with a crust of ice and her sadly inadequate shoes crunched through the rime into puddles, splashing her jeans with ice water. She could no longer feel her toes.

This was all Prof. Harthoorn’s fault. He was the reason she’d spent all day in the library, the reason she wasn’t at home right now, eating dinner with her parents. But here she was, toes numb with impending frostbite, all because her senior thesis—­the thirty-­two-­page paper she’d been working on for months—­was incomplete, he’d said. Inadequate, he’d said, because she hadn’t addressed the pivotal event in Artemisia Gentileschi’s life, the life-­changing trauma that imbued her paintings with such violent and visceral power: being raped.

As if women were formless lumps of clay, needing to be pummeled and abused to be shaped into something greater. As if what Artemisia needed to become an artist was a good old-­fashioned sexual assault.

She felt more and more angry about Harthoorn’s comments as she walked across the quad, splashing through slush. What did a dried-­up old man like him know about women and all the wearying and infuriating annoyances they had to tolerate? All the helpful advice foisted on them by men with their I know better voices.

She reached the crosswalk and stopped at the pedestrian light, which had just turned red. Of course it was red; nothing today had gone her way. Cars rolled past, tires spraying up water. Sleet clattered on her backpack, and she thought about her laptop and whether it was getting wet and she’d lose all the work she’d put in this afternoon. Yes, that would perfectly cap off her day. It’s what she deserved for not checking the forecast. For not bringing an umbrella. For wearing these stupid shoes.

The light was still red. Was it broken? Should she ignore it and just make a dash across the street?

She was so focused on the light that she wasn’t aware of the man standing behind her. Then something about him caught her attention. Perhaps it was the rustle of his nylon jacket, or the odor of alcohol drifting on his breath. All at once she knew someone was there and she turned to look at him.

He was so bundled up against the cold, with a scarf wrapped up to his chin and a wool cap pulled down to his eyebrows, that all she could really see of his face were his eyes. He didn’t avoid her gaze but looked straight back at her with a stare so piercing that she felt violated, as if that stare was vacuuming out her deepest secrets. He made no move toward her but his gaze was enough to make her uneasy.

She glanced across Huntington Avenue, at the businesses across the street. The taco shop was open, its windows brightly lit, and she could see half a dozen customers inside. A safe place, with people to turn to if she needed help. She could duck in there to get warm, and maybe call an Uber to take her home.

The light turned green at last.

She stepped too quickly off the curb and the sole of her leather flat instantly skidded across the ice-­slicked road. Arms flywheeling, she fought to stay upright but the backpack threw her off-balance and down she went, her rump splashing down into slush. Soaked and shaken, she staggered back to her feet.

She never saw the headlights hurtling toward her.