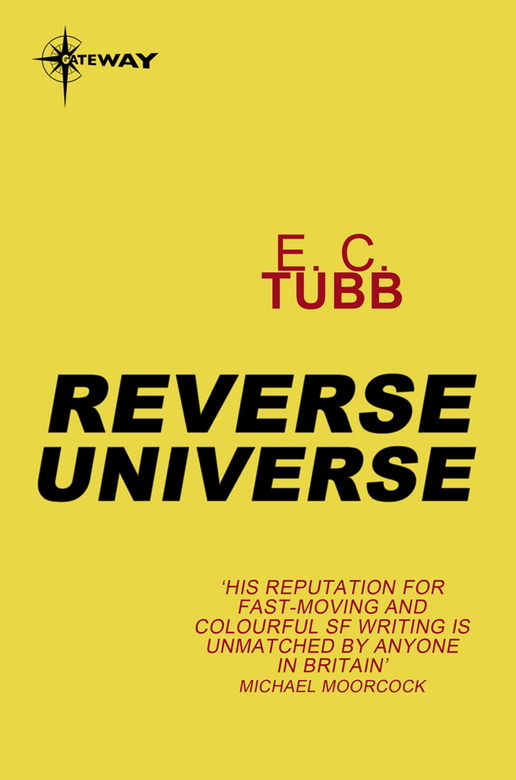 Fifty Days to Doom (first published as The Extra Man (1954))

World in Torment (originally published as The Mutants Rebel (1953))

The Possessed (revised version of Touch of Evil (1957))

Secret of the Towers (originally published as The TormentedCity (1953))

The room hummed with the low murmur of power under perfect control, the faint clicking of relays as power flowed from banked photo-electric cells, a slight hiss from the refrigeration units, and a muted hum from the air conditioners. Geigers chuckled their inevitable warning, and from somewhere far below the sound of whining engines vibrated gently through the metal of walls and floor. The varied sounds mingled, lost their individuality and blended into a quiet drone. A sound that would be noticed only if it stopped.

Commander Hargreaves hoped it never would stop. While the sound continued he would be safe. All his command would be safe, and an outpost of civilisation would function as designed, but sometimes he wondered. Sometimes he woke in a sweat of fear, listening, listening, straining his ears for the reassuring murmur. He would be glad when retirement came.

Idly he let his gaze drift over the familiar room, the instrument-lined walls, the blank faces of the telescreens, the thickly shielded windows. He smiled at a man standing before one of the round ports.

“Gets you doesn’t it, Landry?”

“Yes,” said the man simply. “It does.” He turned from the window, a tall man, trimly uniformed in close-fitting black, the gleam of golden insignia showing from his wide shoulders. His hair was the same colour as his uniform and cut short as was the fashion. Grey eyes stared coldly from his stern looking face. He smiled grimly at the old commander.

“I’ve seen the sun a thousand times, and seen it closer from Mercury Station, but as you say, it still gets me.” He slipped into a proffered chair. “How long have you been here?”

“Too long.” Hargreaves cocked his head, listening intently, then smiled at the tall captain’s quizzical expression.

“I came when Mercury Station was still the nearest man-made thing to the sun. I was here when the first orbit station was launched, and I watched it as it fell into the sun. I’ve seen others launched, others fall to a flaming death, and I’m getting too old for much more of it.”

Landry smiled, noticing the thousand tiny wrinkles wreathing the old man’s eyes, the almost hairless scalp, the betraying tremor in the pudgy white hands. Once Hargreaves had been an adventurer, a man willing to laugh at impossible odds, now he was merely an old man craving a snug corner. A place where he could forget the blazing threat of a swollen sun.

He couldn’t be blamed. Men were not designed to stand the constant sight of a sun more than seven times larger than normal, nor were they intended to live on an arid cinder of a planet with over a thousand degrees difference between dayside and nightside temperatures. Mercury Station had been built on the narrow twilight belt, powered by photo-electric cells from the dayside, and cooled by the frigid gases from the nightside.

“You’ll be home soon,” he told the old man. “A little farm somewhere, a few chickens, maybe a cow. Is that what you want?”

“No. I want the cities, the feel of life around me, rain, the smell of civilisation.” Hargreaves grimaced, twisting his thick lips. “I’ll be a nightbird. Sleeping all day, and coming out when it’s dark. I’ll live in the arctic, feel the snow, and look at ice.” He sucked in his flabby cheeks. “I think I’ve forgotten what it’s like to feel cold.”

“You’ll remember,” promised Landry, “and you won’t like it.” He looked at the old commander. “Can you tell me why I’m here?”

“No. I understand I’m to captain an orbit station. I’ve done it before, and I’ve had experience of Solargation. Can you tell me more?”

Hargreaves looked down at his thick white fingers. “You’re in Security aren’t you?” He sounded painfully casual.

Landry laughed. “Yes, but don’t let that scare you. Security doesn’t always mean secret police. I was chosen because I have experience, knowledge of how to keep a secret, and because I’m a trusted agent of the Solar Federation.”

“Surely you have orders?”

“I have. I’m to place myself at the disposal of Professor Whitehead, using my own discretion and judgment to safeguard his life and his discoveries if any.”

“Then why not ask the professor?”

“I will, but I haven’t met him yet. I’ve only just landed and naturally you were the first person I contacted.” He smiled, a sudden warmth melting his cold features. “A man such as yourself, commander, can understand my desire to hear a practical opinion on what I have to do.”

The flattery worked. Hargreaves pursed his thick lips, nodded to himself, and looked at his companion. “You know that you are a replacement?”

“Yes. The original man broke his leg,” Hargreaves chuckled. “Strangely enough he did it just after his interview with the professor, and knowing what I do, I can’t altogether blame him.”

“What do you know, commander?”

“Not much,” admitted the old man. “You know how these scientists are, half the time they forget that others exist, and the rest of the time they abuse us for not being as fanatical as themselves. Mercury station was built for observation purposes. It was the nearest that man had been able to get to the sun, and everyone thought it would be near enough. For a while it was, then they had to build the orbit stations.” Hargreaves snorted in disgust. “A sane man would have been satisfied with what he had. Sixty million miles nearer, and they had to try and cut it down another ten million. They lost three stations for each one they managed to get into orbit, nine ships, nine full crews. I watched them burn.”

Silence crept into the room, silence accentuated rather than diminished by the murmur that was the life-beat of the dome. Both men thought of the same thing, of helpless ships being sucked down by terrible gravity to the churning incandescence of the sun. Hargreaves shuddered.

“Sometimes I dream of those ships,” he muttered. “The hulls would go first, dripping into molten ruin. The air would get hot, reach boiling point, then the melting point of lead, then higher and higher. The crews would be dead by then of course, their blood boiled in their veins, their flesh roasted.”

“Yet they established the orbit stations,” reminded Landry. “They even managed to orbit closer to the Sun.”

“Yes,” admitted Hargreaves. “Nearer by six million miles, twenty million from the sun, but those stations proved useless for observation.”

“Naturally,” murmured Landry. “Their orbital speed was too great. To avoid being dragged into the dang. . .