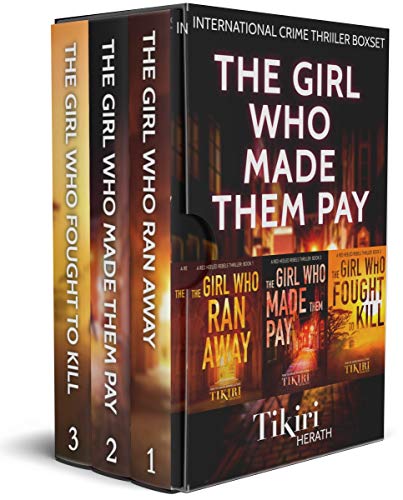 Book ONE: The Girl Who Ran Away
The day her parents die in a suspicious car accident, Asha's perfect life is shattered.

She is the lone survivor, and the authorities have no choice. She is thrust into a family she never knew existed.

Desperate and alone, all Asha wants is to belong again, but she soon discovers her new home hides dark secrets.

Nothing is what it seems.

They're conspiring against her. So, she plots her escape. She will need all her cunning and guile to flee from her brutal fate, but every step she takes traps her into an unthinkable future.
What will Asha have to sacrifice for her freedom?

Book TWO: The Girl Who Made Them Pay

But did they let their guard down too soon?

Within minutes, Katy is abducted. In the middle of a crowded airport.

With one thin clue to Katy's disappearance, Asha races across London to find her. But every step embroils her further in the back alleys of Europe's red-light districts.
Asha's terrified of discovering the truth, but she'll never back down.

Not until she finds Katy. Alive or dead.

And time is running out.

Book THREE: The Girl Who Fought to Kill

Everyone who gets close to Asha ends up in danger of their lives, she begins to believe she's cursed. And this time, it's personal.

This time, it's her cousin, her only family left in the world.

She was barely sixteen when she disappeared. The only clue to where she's gone is in a secret message tucked inside a long, lost diary. But no one's talking. Least of all her vile, drunken husband who has taken another wife.

Can Asha unscramble the lies in time to find her cousin alive? Or will she find her dead?


Pick up the Red Heeled Rebels for an international adventure without having to get a passport or even buy an airline ticket. Get this page-turning thriller boxset now!