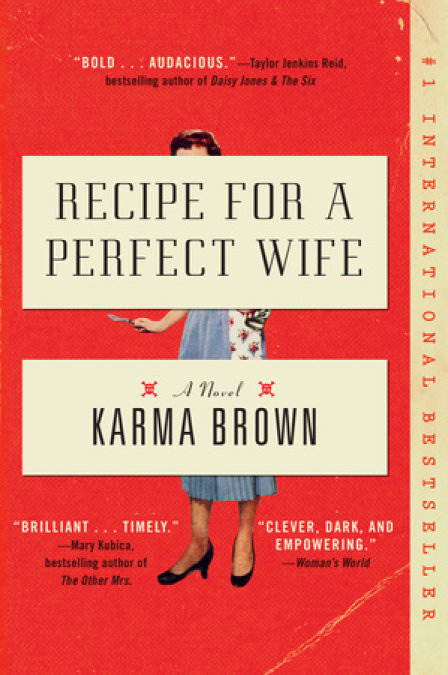 In this captivating dual narrative novel, a modern-day woman finds inspiration in hidden notes left by her home’s previous owner, a quintessential 1950s housewife. As she discovers remarkable parallels between this woman’s life and her own, it causes her to question the foundation of her own relationship with her husband--and what it means to be a wife fighting for her place in a patriarchal society.

When Alice Hale leaves a career in publicity to become a writer and follows her husband to the New York suburbs, she is unaccustomed to filling her days alone in a big, empty house. But when she finds a vintage cookbook buried in a box in the old home's basement, she becomes captivated by the cookbook’s previous owner--1950s housewife Nellie Murdoch. As Alice cooks her way through the past, she realizes that within the cookbook’s pages Nellie left clues about her life--including a mysterious series of unsent letters penned to her mother.

Soon Alice learns that while baked Alaska and meatloaf five ways may seem harmless, Nellie's secrets may have been anything but. When Alice uncovers a more sinister--even dangerous--side to Nellie’s marriage, and has become increasingly dissatisfied with the mounting pressures in her own relationship, she begins to take control of her life and protect herself with a few secrets of her own. 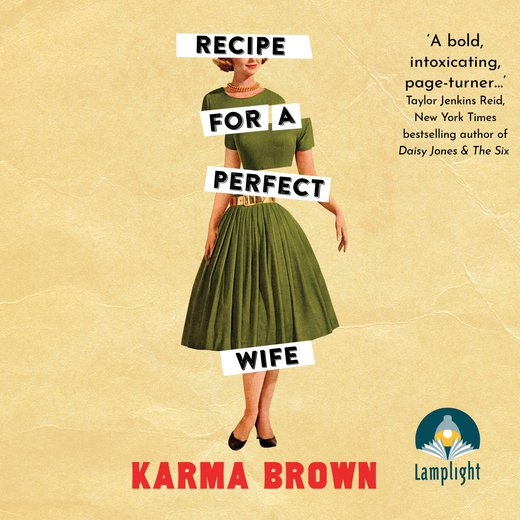 Mix all ingredients, place in greased loaf tin, and bake in slow oven (300°F) for 45 minutes. Serve hot or cold. One tin of concentrated tomato soup is a pleasant addition to any meat loaf.


Nellie Murdoch buttoned her dungarees—which she wore only to garden because her husband, Richard, preferred her in skirts—and tapped the Lucky’s white‑and‑red‑foil cigarette package on the table against her hand. Sliding the slender cigarette into her mother‑of‑pearl holder and lighting it, she sat in one of her new chairs—robin’s‑egg blue, like cloudless summer skies—at the kitchen table and smoked, flipping through the latest Ladies’ Home Journal. Richard kept trying to get her to switch to gum (he’d inherited a chewing gum business from his father, the original Richard Murdoch), or at least to a filtered cigarette, sug‑ gesting they were healthier. But Nellie hated all the lip smacking that came with chewing gum and loved her Lucky cigarettes. She liked how smoking changed her voice, made it a little huskier and certainly more interesting when she sang. Nellie had a beau‑ tiful voice, though sadly the only time she used her gift was at church, or in the bath, or to coax out flower petals. Filters promised to remove throat irritation, as her doctor and the magazine advertisements told her, and Nellie wanted no part of that.

Picking a piece of errant tobacco off her tongue, Nellie stopped at the “Can This Marriage Be Saved?” column in the magazine and scanned the three points of view: the husband’s, the wife’s, and the therapist’s. The husband, Gordon, was overwhelmed with his financial responsibilities and irritated that his wife con‑ tinued spending money on things like expensive steak for dinner, clearly not aware of his stress. The wife, Doris, felt ignored by her husband and his silent treatment and would cook him this ex‑ pensive steak to try to make him happy. Nellie shifted in her chair, crossed her legs, and drew deeply on her cigarette, imagining what advice she would offer this couple who had been marinating in marriage for more than a decade. One, she’d tell the wife to quit cooking for a week and see how that helped her husband’s stress. Two, she’d suggest to the husband he might try talking to his wife rather than expect her to read his mind.

She quickly scanned the therapist’s advice, which amounted to: Doris should know her expensive dinners were only making things worse for poor, worried Gordon, and therefore her as well; Gordon should not be expected to have to tell Doris how he’s feeling . . . she should just know. The way any good wife would.

Nellie—who had been Mrs. Richard Murdoch for barely a year—snorted, sympathetic to Doris and Gordon’s plight but certain she would never have to write away for such advice. From the moment Richard, eleven years her senior, plucked her from the crowd at the supper club and declared she would be his wife, Nellie had felt lucky. He might not have been the most attractive compared to her friends’ husbands, nor the most doting, but he certainly had his charm. Richard had swept her off her feet that night—quite literally, as he picked her up in his arms and carried her to his table once he heard it was her twenty‑first birthday, plying her with expensive champagne and adoration until she was tipsy and enchanted. In the two years since, Nellie had discovered that Richard was not a flawless man (was there even such a thing?), but he was an excellent provider and would be an attentive father. What more could a wife expect from her husband?

She stubbed out her cigarette and tapped the holder to release the butt before pouring a glass of lemonade. It was getting on, and she knew she should start dinner soon. Richard had asked for something simple tonight, as he was ill with one of his bad stomach spells. He’d suffered a terrible ulcer a couple of years earlier and it continued to flare up now and again. There’d been a great sale on ground hamburger this week and she’d bought enough for a few meals. Richard kept telling her she didn’t need to scrimp, but she had been raised to spend wisely. To be thrifty wherever possible. Despite Richard’s family’s money—which was now their money, since his mother Grace’s death only four weeks after their wedding—Nellie still liked a deal.

She pulled her mother’s bible—Cookbook for the Modern Housewife—the spine soft thanks to years of use, its pages covered in the spots and stains of meals past, from the shelf. Singing along to Elvis Presley’s latest, “Hound Dog,” Nellie sipped her lemonade, thumbing the pages until she found the one she was looking for, dog‑eared and well used. Meat Loaf with Oatmeal, the note Good for digestion written in her mother’s pristine handwriting beside the ingredients list.

Setting the cookbook aside, she finished her glass of lem‑ onade and decided it was time to get to the garden before the day got away from her entirely. It was scorching outside and a hat would probably be wise, but Nellie liked the sun on her face. The smattering of freckles she’d accumulated already this summer would have horrified her mother‑in‑law, who valued unblemished skin on a woman. But the impossible‑to‑please Grace Murdoch was no longer around to offer her opinions, so Nellie headed outside without a hat.

Nellie loved her garden, and her garden loved her. She was the envy of the neighborhood, her flowers blooming earlier than everyone else’s, staying full and bursting long after others were forced to clip flower heads and admit no matter what they did they would never have flower beds like Nellie Murdoch’s.

Though everyone was dying to know her secret, she claimed there was no secret at all—merely time pruning and weeding, and an understanding of which blooms liked full sun, which thrived in wetter, shady spots. Nothing extraordinary about it, she’d say. But that wasn’t entirely true. Nellie had from an early age mucked about in the garden with her mother, Elsie Swann, who spent more time among her plants than with human companions.

Through the warm months Nellie’s mother was gay, funny, and ever present in her daughter’s life. But once the flowers died with the end of the sunny season, turning to a mass of brown mulch covering the garden soil, Nellie’s mother would retreat inside where no one could reach her. Nellie grew to hate those cold, dark months (she still did), her mother glassy‑eyed at the kitchen table, unaware how much her young daughter was trying to do to keep the household running. To keep her no‑good father from leaving them, the way her grandfather had left her mother and grandmother years ago.

Elsie taught her daughter everything she knew about gardening and cooking during those swatches of light woven be‑ tween her dark moods. For a while things seemed good, Elsie always coming back to herself after the snow melted and the days grew long shadows. Nellie and her mother were an un‑ breakable team, especially after her father left, finding the cheer‑ fulness of a younger, less complicated woman more palatable to his needs.

Sweat trickled between Nellie’s breasts, well encased in her brassiere, and pooled in her belly button and in the creases behind her knees. Perhaps she should have worn shorts, and she considered going upstairs to change out of her dungarees. Never mind, she thought. This heat is good for me. She sang softly to the plants, stopping to caress the tubular magenta petals of the newly sprung bee balm, a favorite of hummingbirds. “Even a plant needs a gentle touch, a gentle song, Nell‑girl,” her mother would say. Nellie wasn’t as green‑fingered as Elsie, but she did learn to love her flowers as much.

Once the garden was weeded and the blooms lullabied, Nellie trimmed a few herb sprigs, macerating a flat parsley leaf with her gloved fingers and holding it to her nose, the smell green and bright and satisfying.

Back in the kitchen Nellie washed and chopped the parsley and added it to the meat mixture, along with a sprinkle of the dried herbs she cultivated in her garden and kept in a cheese shaker in the cupboard. She glanced occasionally at the meat loaf recipe to ensure she hadn’t missed anything. Despite having made this recipe dozens of times, she liked following the steps precisely. Knew it would result in a meat loaf perfectly browned on top yet still juicy inside, the way Richard liked it.

Nellie hoped his stomach had improved as the day wore on; he’d barely been able to get his breakfast down. Perhaps a batch of fennel and peppermint tea with dinner might help—iced, because he didn’t enjoy warm beverages. She hummed to the radio as she trimmed a few mint leaves, hoping Richard wouldn’t be late for dinner again tonight. She was bursting with wonderful news and couldn’t wait to tell him.