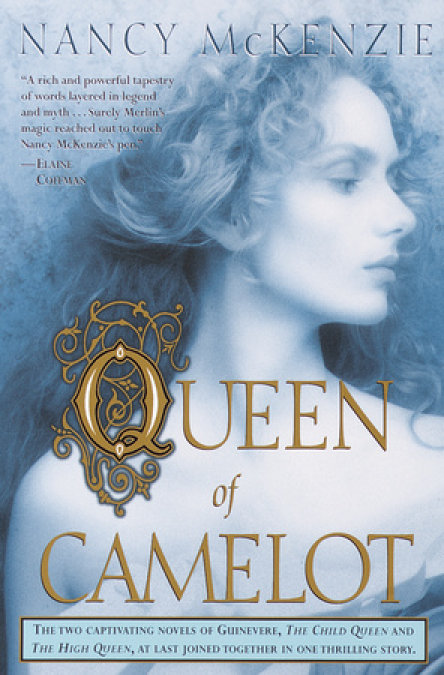 On the night of Guinevere’s birth, a wise woman declares a prophecy of doom for the child: She will be gwenhwyfar, the white shadow, destined to betray her king, and be herself betrayed. Years pass, and Guinevere becomes a great beauty, riding free across Northern Wales on her beloved horse. She is entranced by the tales of the valorous Arthur, a courageous warrior who seems to Guinevere no mere man, but a legend. Then she finds herself betrothed to that same famous king, a hero who commands her willing devotion. Just as his knights and all his subjects, she falls under Arthur’s spell.

At the side of King Arthur, Guinevere reigns strong and true. Yet she soon learns how the dark prophecy will reveal itself. She is unable to conceive. Arthur’s only true heir is Mordred, offspring of a cursed encounter with the witch Morgause. Now Guinevere must make a fateful choice: She decides to raise Mordred, teaching him to be a ruler and to honor Camelot. She will love him like a mother. Mordred will be her greatest joy–and the key to her ultimate downfall.

The night of my birth the famed witch Giselda, the ugliest woman in all Britain, came to see my father, the King of Northgallis. It was the last night in April, cold and blowing a fine, icy rain. My father and his drinking companions, such nobles and petty lords as could leave their lands in the hands of others, sat in the hall before a great log fire while the women attended my mother and brought him tidings as the night wore on.

The guard let her in, not knowing who she was. She was old and bent, her hands were crippled and swollen, and my father’s hospitality to the poor and infirm was well known. But she would not stay to warm herself before the peat fire in the kitchen, where the cooks were heating water for the queen’s birthing. She made for the hall and the king. When the guard would have stopped her, she lifted her hood and glared at him. The very sight of her face froze him to the spot where he stood, and she passed by.

Likewise, when she came into the hall, and the company turned to her in surprise and then protest, she silenced them all when she uncovered her head.

My father faced her. He was always the bravest man among brave men. “I am he, witch. State your business and be gone. You come at a time of celebration, and we would not be interrupted! Know you not my young queen gives birth this night?” His companions cheered him, and he even smiled at the old witch. He was the father of five sons of fighting age and the new husband of the loveliest woman in Wales. He could afford to be magnanimous.

But the witch stared at him, trancelike, until the room was quiet and all eyes were on her. “Beware, King! Laugh not until the night is over! It is a night of wonders! The queenstar in the east has fallen in a hail of light. And in its place burns a new star of wondrous brightness! The fairest in the heavens! These are portents of things to come. There is magic in the air this night. In this house.”

My father was not a Christian, nor were the others in the room. He worshipped Mithra, the Bull-Slayer, when he was at war, along with all the other men who fought under the High King Uther Pendragon, and the Great Goddess when he was at peace. Yet he also believed in the ancient gods of his ancestors, the gods of roadways and rivers, of the storm winds, the low forests and the high hills, gods whom men had worshipped before ever the Romans came to Britain. To speak to him of magic was to touch him near the heart, and he was afraid.

“What do you mean, woman?” he demanded, hiding his fear in anger. “Where in this house?”

The witch grinned, showing black and broken teeth. Her voice fell into a low and vibrant monotone, and all strained to hear her words. “This night shall be born a daughter who shall rule the mightiest in the land.” Her words fell on silence. “She will be the fairest beauty the world has known and the highest lady in all the kingdoms of Britain. Her name will live on in the minds of men for ages to come. Through her will you reach glory.” Here she paused and passed her tongue over dry, cracked lips. Someone handed her a cup of spiced wine, and she drank. “But she will bring you pain, King, before ever she brings you joy. Beloved of kings, she shall betray a king and be herself betrayed. Hers will be a fate no one will envy. She will be the white shadow over the brightest glory of Britain.” Here she stopped, shook herself awake, and, doing my stunned father a low curtsy, hurried out of the house before any man had sense enough to stop her.

The room was at once alive with voices. Each man asked his neighbor what she had meant. Each man thought he knew what the prophecy foretold. All of them took it as wonderful news for my father, except my father himself. He sat frowning in his great chair, saying over and over “the white shadow. White shadow.” He used the Celtic word the witch had spoken: gwenhwyfar.

Just before dawn the weather broke and the wind softened. It was the first of May, a day sacred to the ancient Goddess, and the queen’s labors were over. My father, asleep over his wine like his fellows, awoke with a start of premonition to find his chamberlain trembling at his elbow. He was charged with a dolorous message. The good Queen Elen had brought forth a daughter, but had died thereof. With her last breath she had kissed me and named me: Guinevere.