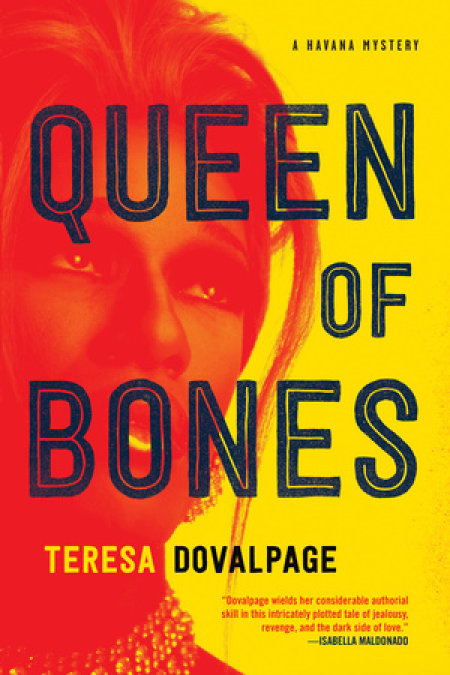 Set between Cubas twenty years apart, Havana native Teresa Dovalpage's new mystery features an unusual detective-an ex-cop turned Santeria priest and a familiar face from her acclaimed crime fiction debut, Death Comes in through the Kitchen. Juan, a Cuban construction worker who has settled in Albuquerque, returns to Havana for the first time since fleeing Cuba by raft twenty years ago. He is traveling with his American wife, Sharon, hoping to catch up with Victor, his best friend from college-and, unbeknownst to Sharon, discover what has become of two of his ex-girlfriends, Elsa and Rosita. Juan is surprised to discover that Victor has become Victoria, and runs a popular drag show at the local hot spot Caf. Arabia. Elsa has married a wealthy foreigner, and Rosita, still single, works at the Havana cemetery. When one of these women turns up dead, it will cost Padrino, a Santeria priest and former detective on the Havana police force, more than he expects to untangle the group's lies and hunt down a killer. 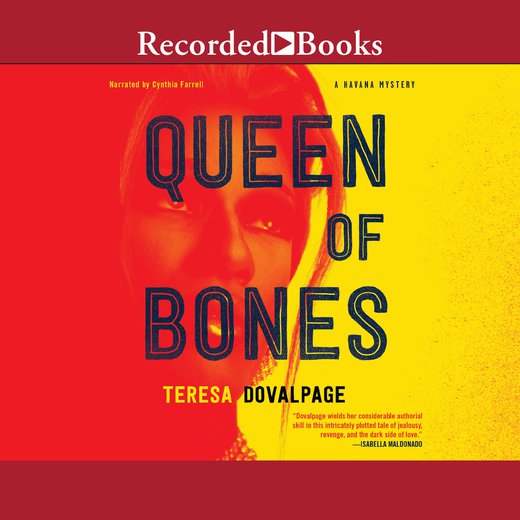 Oyá dresses in purple and dances alone, with a necklace of bones clicking around her throat. She is the keeper of the cemetery gates and welcomes refugees from life into her kingdom. She collects little sugar skulls on the Day of the Dead and offers sweets to the widows and orphans. The mother of nine stillborn children, she has a special place in her heart for women who have lost their babies, as well as children without mothers.      Owner of the seven winds, Oyá rides them and rules over storms, tornadoes and tempests. She often enters atop them brandishing her horsetail fly whisk, swirling her nine skirts.
She keeps one foot in life and the other in death. Mistress of cemeteries, the orisha Oyá is not to be invoked in vain.
The ceremony started in the early afternoon. That day, February the second, was devoted to the Virgin of Candlemas, associated with Oyá in the religion of Santería. (Oyá was also worshipped as Saint Thérèse of Lisieux, though even the most knowledgeable santeros couldn’t explain her connection to the Discalced Carmelite nun.) Her devotees had gathered in an old house located in Guanabacoa, a colonial town across the bay from Old Havana. The backyard had been prepared for the ceremony. An altar stood covered in a white linen cloth and ornamented with fresh violets, candles and candy in small copper trays, as copper was Oyá’s favorite metal. Eggplants—fried, steamed and raw—were served on porcelain dishes. A large print of Saint Thérèse presided over the altar.
The women who hoped to be possessed by the orisha wore skirts in all shades of purple. The newly initiated to Santería were dressed only in white down to their stockings and shoes, with white turbans or white kerchiefs covering their heads. Men were dressed formally, with old-fashioned, well-polished shoes and ironed shirts.
At three o’clock, the drums began to thunder. Dancers moved in a whirl and followed the rhythm that beat in synchrony with their hearts. Those who didn’t dance remained in their seats eating malanga fritters, a meat and vegetable stew known as caldosa, and guava pastries, all of which they washed down with generous swigs of rum.
Rosita, a tall forty-year-old woman who was dressed in all purple for the occasion, felt the wind rushing in her ears. Padrino, the babalawo who was leading the ceremony and Rosita’s Santería godfather, tapped her lightly on the head with his cane. She stood, and Oyá entered her body, whizzing through her, dancing, laughing, crying, bending over, grabbing food from people’s plates and eating it right before their eyes.
“Maferefún, Oyá!” they greeted her.
The orisha blessed the guests in a grave voice laced with contralto undertones. Oyá kept dancing until Rosita’s body collapsed on the floor. Two older women took her to a bedroom and placed cologne-soaked towelettes over her forehead. After she’d recovered, Padrino came to see her.
“Oyá came in strong today,” he said.
Rosita smiled and spoke in her usual high-pitched tone.
“Padrino, do you remember that boyfriend of mine who left Cuba?” she said. “Juan. The one I couldn’t forget.”
Padrino nodded.
“Oyá told me he would come back, like a salmon swimming upstream. Does it mean he’s returning to Cuba, Padrino? Juan hasn’t been back in twenty years, as far as I know.”
“Maybe,” Padrino said. “But do you know why salmon swim upstream, mija?”
“To mate?” Rosita blushed.
“And to die.”
“Don’t say that, Padrino,” she whispered. “Juan is the man of my life. The first and the only.”

The water was hot, but not scalding. The golden glow from the jasmine-scented candles created an ambiance that Sharon, in her real estate jargon, would have called “intimate luxury,” “a private sanctuary” or something of that sort. She shifted in the hot tub and let the jets massage the tension out of her shoulders. Her acupuncturist had mentioned that she had knots underneath them. She sighed.
Yes, she was tense. Nobody had to tell her that; she already knew it. First, there was that high-end North Valley property she’d hoped to sell sooner than now. She had wooed the owners, an elderly couple, until they’d agreed to let her stage their home using everything from trendy designer friends’ tips to feng shui furniture arrangement. In a year of painfully slow sales, that 1950s house, with its five bedrooms, marble countertops, and Olympic-sized pool that hadn’t been used in a decade, was her small real estate company’s most auspicious prospect.
An open house was scheduled for the coming Saturday, the same day her husband was flying to Havana. It would be Juan’s first visit to the island in twenty years. Though he hadn’t said it in so many words, Sharon had the impression that he preferred to travel alone.
She remembered their meeting with the Santa Fe–based travel agent who had helped Juan get his Cuban passport and, bizarre as it sounded, his Cuban visa as well.
“So I can buy a visa for twenty-five dollars and travel to Cuba tomorrow, while Juan, who was born there, needs to ask for his visa three months in advance and pay four times as much?” Sharon had asked. “That’s weird.”
Sonya, the Cuban travel agent, agreed that it was.
“That’s Cuba for you, Señora,” she said. “A little crazy, yes. But I’m here to make the paperwork easier for you.”
Sharon liked her. Sonya was bright and polite. Unlike Juan, she spoke fluent English. As the only Cubaviajes representative in New Mexico, Sonya managed everything from people-to-people permits for Americans to the entry visa and passport applications for Cubans.
It took Juan five months to get all his documents ready. He needed a Cuban passport to enter the island and an American passport to get back to the United States. The fact that he had left Cuba on a raft in 1994 also contributed to the delay, Sonya explained. “They” had probably gone through his records to make sure he wasn’t the kind who would go back to cause trouble. “They” was the ambiguous pronoun that Cubans, or at least the Cubans Sharon had met, used when talking about their government and its surveillance system. It could be the political police, La Seguridad. Or Fidel Castro himself, or his brother Raúl, or the Politburo. But things were improving, Sonya had assured Sharon. “The paperwork will get easier from now on,” she had said.
Sharon looked out the picture window she had installed in front of the hot tub. She had bought this town house because of its Sandia Mountains view and the glorious sunsets it captured. She had also gotten it because Juan had fallen in love with the golf-focused gated-community gym, where a retired weightlifter offered weekly classes. Juan didn’t know how to play golf, but he loved body building. He also loved the pool and Jacuzzi—and all good things in life, as he put it. Sharon wanted to think that one of the good things in his life was her.
She got out of the hot tub and glanced at her naked body in the full-length mirror. At forty-nine, she still looked good. No belly fat. Wide hips, but she had a grown daughter. Good posture. Tits nipped and tucked. For her fiftieth birthday, she would buy herself a facelift.
She opened the door to the master suite and heard Juan’s voice. He was speaking Spanish. After seven years of marriage to him and several classes at a local college, Sharon wasn’t totally fluent, but she understood almost everything he was saying. And he was saying this:
“I want to see you again. To make sure we’re okay . . . No, no, I’m not blaming anyone! I just need to see you. That’s why I’m going alone. No pressure, you know?”
Sharon waited behind the door until Juan finished his conversation. It ended with a promise to call whomever he was talking to as soon as he arrived and a muddled apology.
Sharon pursed her lips and patted herself dry. She put on a blue cardigan sweater and white pants, which she had laid out for herself on the sink before her bath, and breathed in heavily to calm herself down. When she entered the master bedroom, Juan had changed into his workout clothes.
“Amor, I am going to the gym,” he said, pronouncing “gym” “yin.”
“See ya.”
As soon as he left, Sharon started looking around for Juan’s cell phone, but couldn’t find it. He must have taken it with him, though he usually didn’t when he went to the “yin.”
She willed herself not to panic.