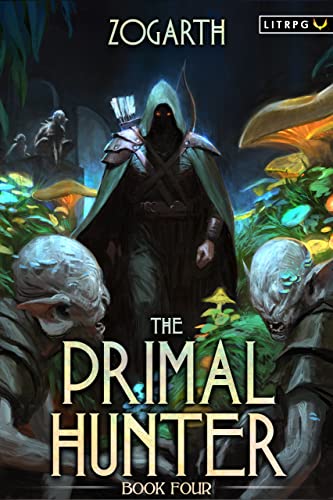 Now in D-grade, Jake prepares to face even stronger foes: poo-flinging monkeys, even bigger mushrooms, and the most dreaded of all: politics…

The first World Congress approaches, allowing all the forces on Earth to finally meet, reuniting friends and enemies alike. Of course, to Jake, this World Congress is just a good way to finally catch up with old friends as he lets others deal with all the annoying politics, trying to not get involved.

Unless he wants something, that is.

The World Congress reveals more opportunities in the future for Jake and the other denizens of Earth to take part in, making them all begin their own preparations. To make sure Jake is up to the challenge, he must find stronger prey to get those sweet, sweet levels under his belt. Luckily for him, the death of a hated mushroom revealed a prime hunting ground: A Dungeon.

About the Series: Experience an Apocalypse LitRPG with levels, classes, professions, skills, dungeons, loot, and all of the great traits of progression fantasy and LitRPG that you've come to expect. Follow Jake as he explores this new vast multiverse filled with challenges and opportunities. As he grows in power and slowly transforms from a bored office worker to a true apex hunter.
Read more

The plan was simple: Fire off ranged attacks from a distance, trying to damage or maybe kill one or two, with Bertram trying to go in the front with his shield and get their attention, while Jacob and Theodore flanked him to cover his sides. The plan held the assumption that the beasts were stupid and aggressive if attacked.  Planning so much was maybe a bit overboard for overgrown badgers, but no one seemed willing to take any risk. A sentiment that Jake understood, but disagreed with. Wouldn’t a fight without any risk be a bit… boring?  The only problem with the plan was that apparently the casters only had around ten meters of range on their bolts—any longer than that and they would fizzle out of existence, according to what Ahmed, the last of the casters in their group, had been told during the introduction.  They easily dismissed Dennis with his throwing daggers, having no faith in his accuracy at thirty meters, or even ten for that matter, assuming he could even throw them that far. This left Jake and Casper. And as for Casper… The first time he had ever held a bow in his life was earlier that same day when he got it from choosing the Archer class.  "So, Jake, you got confidence to hit one from here?" Jacob inquired, seemingly not holding much faith in the plan they had spent the last ten or so minutes making. That the planning had been a waste, Jake agreed on. The beasts would already be dead if it was up to him.

"Of course," Jake answered, once again slightly less awkward than before with everyone staring at him. His well-hidden frustration at the passive group outweighed his social anxiety.  He took out an arrow from the quiver on his back and inspected it. Wooden shaft, steel tip, and fletchings made of a kind of feather he did not immediately recognize. The weight was good and balanced, the arrowhead sharp, and overall, it seemed to be of good quality.  "Okay, ready when you are," Jacob said, getting ready along with everyone else. From the looks of everyone, the lack of confidence was all around. They weren’t fighters. The only one who appeared to have some kind of proper training was Bertram.  Jake walked up over the small hill, followed by everyone else just behind him.  He looked at the beasts and nocked the arrow. He raised his bow as he focused. His vision instantly sharpened, instinctively knowing that Archer’s Eye had activated. Time seemed to slow down ever so slightly as he pulled back the string.  For the first time today, something felt right. The morning routine, work, the introduction, and everything else was just… wrong. But at this one moment, as he held the bow, everything felt like it was as it should be. He smiled, took aim, and shot the arrow. Before even seeing the result, he had already taken out another arrow, preparing to shoot once again in one fluid motion.  The arrow had been aimed at the neck of the strongest beast, the one at level 4. He had briefly considered the heart or the head, but he had limited knowledge of their physiology. The heart might not have been placed where he assumed, and the hardness of the skull was way too unpredictable. The arrow flew in a straight line, with more speed, power, and accuracy than Jake had ever shot an arrow before.

The arrow hit the beast straight in the throat as it raised its head from the carcass of its prey.

It fell back over, and before the other badgers had even registered what had happened, the second arrow arrived, hitting the left-most badger square in its chest, penetrating deeply. The remaining two badgers looked over at the hill and instantly charged at Jake, showing no regard for their lives.  Before they had even moved five meters, another arrow arrived. This time, they were ready, however, and dodged a head-on hit, only leaving a shallow scratch on the one on the right as it dodged. Jake only managed to get off two more arrows before they arrived at the group, both leaving minor injuries on one of them.  Before the beasts could sink their teeth into Jake, a huge figure moved in front of him, carrying a huge shield and a shortsword, followed by Theodore and Jacob off to each of his sides. Jake flanked around, still hidden behind the three men in front of him, trying to see if he could get off another shot.  The first badger to reach them was the uninjured one, smashing into Bertram’s shield and predictably getting knocked back from the impact. Following just behind it was the injured one, this one slightly more cautious as Jacob tried to keep it at a distance by pointing his sword at it and making threatening motions.As Jake took his time to line up a shot, the beast that had smashed into the shield was stabbed by Theodore, who had somehow managed to get it in its hind legs. With the thing disabled, the two warriors quickly managed to hack away at it.