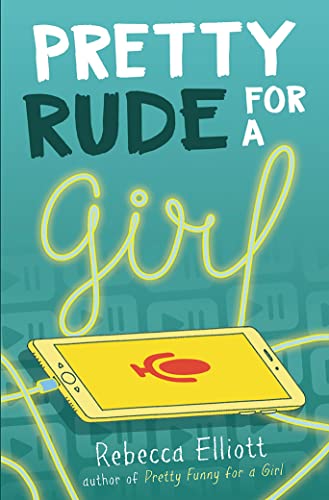 Fifteen-year-old Haylah Swinton is gaining popularity on her comedy YouTube channel, but the jokes she's telling are starting to ruffle feathers in real life. Prepare to snort, guffaw, and cringe through Rebecca Elliott's hilarious companion to Pretty Funny for a Girl.
Big, bold, and funnier than a cat in a onesie playing bagpipes, Haylah's been busy with her online comedy material. But life on the internet comes with its own can of trolls and proving she's funny is tougher than Haylah thought it'd be! Plus, her new boyfriend Dylan hasn't even tried kissing her yet, and when her deadbeat dad decides to turn up, life as she's known it is tossed into one big, colossal mess. So, what better way to vent, than to spill the tea to her newly found audience? But when friends and family discover Haylah's ranting videos on the web, Haylah finds herself with a lot of explaining to do.
Rebecca Elliott's contemporary YA rom-com stars a strong, memorable heroine and features a story full of heart, humor, and relatable themes of body image, self-esteem, relationship building, and taking ownership of mistakes. A laugh-out-loud, binge-worthy read.

“Two. Wear heels! Chances are you have stubby little
legs, and who wants to see those? No one. Literally no one. But good news, jelly-bellies, alarmingly high heels are your friend! They will make you look up to three percent sexier, and they’re only thirty-five times more uncomfortable, and you just can’t argue with that math. So go high or go home, ladies! Though don’t attempt stairs; gravity and inelegance are against you, and you’ll probably end up in an ambulance. Okay? Okay!
“Three. Speaking of legs, do NOT wear leggings. Same goes for ‘skinny’ jeans—I mean, the clue’s in the title, dummy. These garments are made for good-looking people, not you.“Four. Wear one color, preferably dark, like black. That way you can melt into the shadows like a roly-poly ninja and people won’t have to endure the sight of your disgusting bulges. Remember, you won’t cause a scene if you can’t be seen.“Five. Don’t wear anything tight, don’t wear anything baggy, don’t carry a small bag or a big bag; don’t wear patterns, anything cropped, anything masculine, wide belts, thin belts, pleats, stripes, turtlenecks, boat necks, anything with pockets, ruffles, fur, feathers…basically if  it’s got personality or charisma, it’s not for you. I know you’re probably desperate for friends, but, trust me, these clothes are not your friends. They will ridicule you. Behind your fat back. And, really, why bother with fashion at all?
You’re just shoving a bargain store sausage in Fifth Avenue wannabe wrapping, and that’s just deceitful. Okay? Okay!
“So that’s it, girls—have fun with my tips and, if in doubt, just stay at home where no one will have to see you.
Bye for now!”
The forced grin falls from my face, back to my usual sarcastic smirk as I return from being Stacy Beeatch. I knowingly roll my eyes and shake my head at the camera.
“See you next time, beautiful people.”
As I stop recording, little excitement puppies scamper through my brain. The audience’s laughter might not be there, but the high of performing feels almost the same as doing a live gig. Also, I can feel that this is funny stuff, even if it is maybe a bit rude to fashion vloggers, who probably do mean well, I guess. But I’ve gotta have an edge otherwise I’m never gonna be noticed.
Not that anyone’s actually watching these videos. I started making them about a month ago under the handle the PFG (like the BFG, but “Pretty Funny Girl,” obvs) and so far I only have a handful of subscribers. Which is why I haven’t actually told anyone, not even my best friends Chloe and Kas, about this. It all seems a bit too dumbass-pathetic.
I’m mostly making these videos for my own benefit anyway. I spend so much time writing new material, but with nowhere to actually use it I needed a reason to keep writing and practice my performing. So far one gig in London and one disastrous (don’t ask) local openmic gig is all my stand-up career has amounted to. But hey, just like applying stretch mark cream, if I keep at it, eventually something good will happen, right? (Right?!)I grab a fistful of Mum’s cleansing wipes and start mopping away the makeup, watching in the mirror as my face gradually looks less like a child’s coloring book. Just as my freckly features are revealed, my phone vibrates. It’s a message from Chloe, trying to persuade me again to do the open mic on Friday, using about sixteen “pleeeeeaaaase’s.”I reply: Argh, I dunno. U do remember last time, when I exploded the stage with my arse, right?
(If you don’t know what this refers to, I’m not going to tell you. It’s too ball-crushingly embarrassing.)

Kas joins the conversation.
K: But u were great before that happened!
C: Tho’ your butt did get the biggest laugh of
the set.
K: Chlo!
H: No, she’s right, it did.
My booty could headline at the Apollo.
C: U donut, that made me laugh and smudge
my nail varnish.
H: Sorry.
C: No you’re not.
H: SO not.
K: Go on, Pig, it’ll be fun!
C: OMG, u used the P word.
K: Fanny-farts.
Sorry, I meant Hay.
H: It’s cool. My name is Haylah, but “Pig” was one of the many nicknames that had been unlovingly hurled at me at school. Then, like a boss, I turned it back on the bullies by claiming it as my own and insisting  everyone call me that. But in the end I totally rejected Pig, breaking away from how other people viewed me and debuting the real me. It was a sort of rebranding, a way of saying to the world, “I’m not what you see me as—a dumpy, insignificant girl from a broken home. I’m Haylah, a big, brash, proud comedian extraordinaire, so get used to it or get the hell out of my way before I mow you down with my epic boobs. And, sure, I’m still on board with all that, but…don’t tell anyone, but now that it’s gone…I kinda miss Pig. I’d been called it for so long by so many people—many of whom loved me—that I actually saw it as affectionate. It didn’t make me think of fat, disgusting hogs. If anything, it made me think of those trendy little pet micro-pigs—cute, pink, intelligent, lovable—who grow up to be more of a handful than their owners planned for. And I kinda liked that, by being happily called Pig, I was shoving it to all those people who thought being big was something negative. On the other hand, I’m not sure any comedy clubs are going to book a teenage girl called Pig—so I’m sticking with Haylah for now—or PFG.
While I’m pondering this, Chloe continues to try
to harass me into doing the open mic. But I’m still not sure. I lie on my bed and shudder at the embarrassing memory of last time—which, as I HAVE SAID, I’m not going to go into, so don’t even, okay? And, apart from all that, there is the fact that it’s happening at Leo’s dad’s pub. Meaning ACTUAL LEO—ridiculously good-looking but absolute breaker of hearts and stealer of excellent comedy material—might be there. (Okay, “stealer” is a bit harsh as I did technically give him my jokes willingly. But he definitely didn’t have any trouble taking them off me, then kissing me, then telling me he had a girlfriend.) He’s not at my school anymore, so thankfully
I haven’t seen him in a while. He’s gone off to the local sixth-form college where, unlike at our crappy school, he might have a chance of getting into a top university like Cambridge. The smug git. Smug, incredibly sexy git. Stop it, stupid brain!! But, embarrassing memories and sexy gits aside, why not do the gig? I can’t afford to be picky; it’s not like there’s any other stand-up opportunities for teenage girls around where I live. You have to get booked into the open mic nights in London and for that, you kind of have to have actual stand-up comedy experience and be, y’know, an adult. So, if I don’t go to this pub gig, I’m back to desperatelystaring at my emails and hoping that something pings in from the impossibly cool comedyclub owner Van, who I met after I entered the London Young Comic of the Year a few months ago. I’ve not heard anything yet…which does make me worry she’s forgotten about me, or realized no one’s actually interested in the pathetic opinions of a teenage girl. But the thing is, in case you can’t already tell, I really haven’t been feeling pathetic lately. I’m still on a high from absolutely frickin’ nailing that competition. I’m loving my sweet new sense of style thanks to
my recent raids on Grammo’s wardrobe. Me and Chloe and Kas haven’t had a fallout for two whole months (although they have both been off on vacation for a lot of the summer, so that’s kind of helped), and I turned fifteen a month ago—though it wasn’t the world’s most captivating moment, as it was celebrated in a caravan in the pouring rain on a hellish trip to Norfolk with Mum, my little brother, Noah, AND Ruben, my mother’s, ugh, “boyfriend.”
Okay, okay, I do like Ruben. At first I wasn’t sure—it had been me, Mum, and Noah for so long, and I didn’t want to see Mum hurt again after He Who Must Not Be Named (my useless father, not Voldemort—though I think I’d prefer him…) walked out on her. But the truth is Ruben makes Mum happy, he makes Noah happy, and he and Mum aren’t super gross and PDA together (he hasn’t ever stayed the night—thank GOD!), plus he’s only here a couple of days a week so it’s all fine. Truth be told, when he’s not being a proper twonk, he’s actually quite funny. He also gets on well with Dylan.
And remind me who Dylan is, I hear you ask…
Oh, I totally forgot to say! I HAVE BOYFRIEND.
Yay! Yes, I, Haylah Swinton—a large, undainty, loudmouthed non-girlie girl, who believed the world would never see her as girlfriend material (not that I ever quite a hundred percent believed that ’cause, come on, I am pretty epic)—have a genuine boyfriend who chooses to be my boyfriend and so far has not chosen to un-girlfriend  me. I mean, it’s real happy ending stuff, especially when I tell you the whole story. So strap yourselves in, my friends, for the, ahem, love story of the century