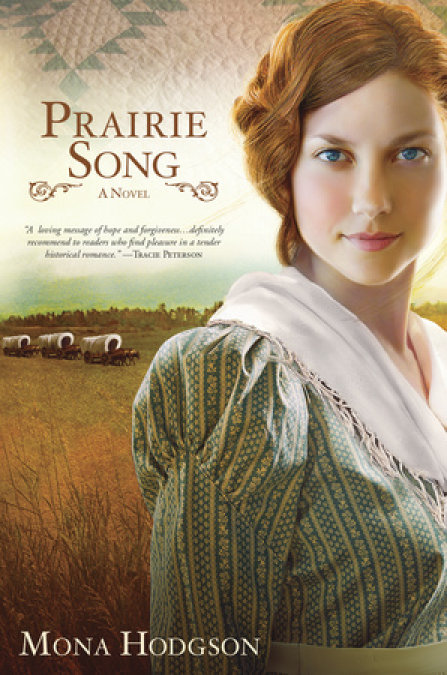 The first step in a challenging journey is often the one that means the most.

Though it means saying goodbye to the beloved friends and spiritual mentors of her St. Charles, Missouri quilting circle, Anna Goben is certain that she needs to enlist her family in the Boones Lick Company wagon train. The loss of her beloved brother in the Civil War has paralyzed her mother and grandfather in a malaise of grief and depression and Anna is convinced that only a fresh start in the Promised Land of California can bring her family back to her. Although the unknown perils of the trail west loom, Anna’s commitment to caring for her loved ones leaves no room for fear—or even loving someone new.

During the five-month journey, trail hand Caleb Reger plans to keep a low profile as he watches over the band of travelers. Guarding secrets about his past and avoiding God’s calling on his life, Caleb wants to steer as far from Anna as she does him, but she proves to be just as he assessed her from the beginning— independent, beautiful trouble.

Led by a pillar of hope, the group faces rough terrain that begins to take a toll on their spirits. Will the wilderness of suffering lead them astray, or will the gentle song of love that echoes across the prairie turn their hearts toward God’s grace and the promise of a new home?

Anna Goben’s bedchamber spun about her.

Hattie Pemberton, a friend from the Saint Charles quilting circle, stood behind her at the dressing table, weaving Anna’s golden-brown hair into a loose chignon. A cord of hair hung on either side of Anna’s face while Hattie worked on the back. Anna’s stomach felt like it had taken in boarders with fl uttering wings, and seeing herself in the mirror above the table wasn’t helping matters. Closing her eyes, she gripped the wrought-iron handles on the bench as if she could brace herself against the wave of nausea. Was her sudden decision to marry Boney the reason for the jitters, or did all women feel sick to their stomach and lightheaded directly before they wed?

She’d probably feel less nervous if more of her quilting circle friends had been able to come, especially the married ones. Emilie and Maren had planned to attend the wedding, but then Emilie’s father fell ill that morning and Caroline needed Maren’s help in the dry goods store.

A twist of hair bounced free, tickling Anna’s ear as Hattie’s tender hand rested on her shoulder. Anna opened her eyes and made herself look in the mirror. Concern etched her friend’s blue-gray eyes.

Hattie tipped her head, causing the wide brim of her yellow hat to bobble. “You look as if you’ve seen an apparition. You’re nearly as white as the frame on the mirror. Are you feeling well?”

Anna slowly turned her head to the right, then just as deliberately to the left, all the while looking into Hattie’s refl ection in the mirror. No, she was not all right. Nothing had been right since her brother’s death. The void Dedrick’s absence left in the family was wrong, and she’d been unable to make anything right since the letter from the Department of War arrived nearly a year and a half ago. She patted the hand on her shoulder. Her friend also knew about the high cost of the war. Hattie’s brother had come home last year spared, but her father had died in battle in ’63.

“Being ill on your wedding day is a serious problem, don’t you think?” Hattie arched her thick eyebrows. “I should let your mother know.”

“But if you’re ill, you should postpone the ceremony.”

Anna sighed. Hattie knew a lot about life for her sixteen years, but her mother had little in common with Anna’s. Bette Pemberton may be willing to postpone a wedding due to the jitters, but Mutter would have no such inclination. Mutter’s heart was set on this wedding, her mind made up. Anna regretted the day she’d mentioned Boney’s surprising proposal and her refusal.

No, she couldn’t postpone the ceremony. The sitting room brimmed with guests. According to Hattie’s earlier report, Boney had spiffed up splendidly for the occasion. His boss, Garrett Cowlishaw, captain of the wagon caravan, stood with Boney and the pastor. And three of Boney’s fellow trail hands were part of the crowd who had come to see them wed. She couldn’t disappoint them. Most of all, she couldn’t disappoint Boney.

Drawing in a deep breath, Anna released her grip on the bench and pressed the silk ribbon at her waist. “I’m feeling a bit nervous, is all.” She nearly laughed at the absurdity of her understatement. She was far more than a tad or a smidge nervous. She hadn’t expected to marry so soon after her eighteenth birthday. Ever, really. Not since Dedrick died, not now that she had to look after Mutter and Großvater.

But marriage to Boney would give her a life apart from them. Somewhat, anyway.

“Anna?” Hattie’s voice brought her back to reality. “You’re nervous about the ceremony?”

Nervous about all of it. The wedding and the marriage. Nervous about the caravan of wagons that would take her and her family away from Saint Charles. She was six when Mutter moved them to the riverside Missouri town to live with Großvater. For twelve years, she’d called Saint Charles her home. Keeping her reservations to herself, Anna smoothed the lace collar on her dress.

“I’ll be fine. I’m sure it’s customary for a bride-to-be to feel anxious.” Was she trying to reassure Hattie or herself? Anna couldn’t say with certainty.

“Customary, yes, but to the point of becoming ill?” Hattie lifted the loose curl at Anna’s ear and returned to her task. “You and Boney have been good friends for many years.”

Anna dipped her chin in a short nod. “Most of my way through school. The year before Boney left for the war, he played Joseph in the Christmas pageant, and I played Mary.”

Hattie nodded, her hat brim bouncing again. “Friends, yes. But marriage, well, that’s a lifelong commitment.” She picked up the strands of hair she’d left hanging and began plaiting them.

Marriage hadn’t been a lifelong commitment for Anna’s parents. When she was a girl, her father had walked away and never looked back. Anna worried the seam in her muslin dress. Her friendship with Boney was largely based on the past, before the war. He had been the closest friend of her brother, Dedrick.

When Boney returned to Saint Charles a month ago with his condolences for the loss of her brother, she and Boney shared memories and commiserated over the damage the war had done. He witnessed its ill effects on her mother. In their subsequent visits, he said Anna deserved to have a better life, to be cared for instead of having to do all the caring. Then he up and proposed marriage.

“Are you having second thoughts?” Hattie asked.

Second thoughts? Third and fourth thoughts. She felt more like crawling under the bed than standing at Boney’s side in front of the pastor. And the cacophony of voices from the other side of the door did nothing to bring her peace. Still, she couldn’t change her mind now. Not with plans made and witnesses gathered. Not after the way she’d turned Boney down, then shown up at the men’s camp with a change of mind.

Hattie tucked the tails of the loose braids into the chignon, then met Anna’s gaze in the mirror. “Boney’s return and proposal was a bit of a whirlwind. And this wedding is quite sudden.” She lifted an eyebrow. “Are you marrying Boney for love?”

Swallowing the bitter lump in her throat, Anna nodded. Of course she loved Boney. Everyone did. What wasn’t to love about him? He was generous and lighthearted. A hard worker. Not only was he a trail hand for the caravan of wagons that would depart Saint Charles next week, but he’d been helping Großvater ready their wagon for the trip. And Boney had loved Dedrick as a brother.

Anna’s breath caught. She loved Boney like a brother. Mutter’s prompting had influenced her, but it wasn’t what had persuaded her to change her mind and marry Boney. Dedrick. She’d been desperate to feel close to her brother. When she saw Boney standing in Großvater’s kitchen, she felt hope stir inside her. Boney helped her remember her brother.

But was that enough reason for her to marry him?

“Perhaps if you stood and rinsed your face.” Hattie glanced at the washstand in the corner.

Anna nodded. Her thoughts had been untangled. It was time she did the same for her insides. It would feel good to stretch a bit. She walked to the wooden stand. While Hattie tipped the pitcher and poured water into the bowl, Anna pulled her washcloth from its peg.

Hattie returned the pitcher to the shelf. “I only wish there was more I could do to help you.”

“You’ve helped more than you know.” More than Anna was ready to say. She still had a question to answer. Was having shared memories of her brother enough of a foundation on which to build a lifelong marriage?

Anna plunged the cloth into the cold water, then wrung out the excess. She’d just pressed the cool refreshment to her face when the door clicked open. She peered over the top of the cloth as Mutter swept into the room, swaying and swerving toward the washstand. Had she been drinking with guests in the house? A wave of heat burned Anna’s neck.

Dedrick may have been Anna’s motivation to accept Boney’s proposal, but Mutter had probably been his reason for asking. Boney thought he could save her from Mutter’s unquenchable grief.

Hattie closed the door and joined them at the bowl. “I just finished Anna’s hair.”

Mutter tugged at the wrinkled sleeves on her shirtwaist. “Anna, you’ve kept Mr. Hughes waiting long enough.” The stench of whiskey hung in the air between them, taunting Anna.

Again ignoring Hattie, Mutter took the washcloth from Anna and dropped it into the bowl. The splash spotted Anna’s pink skirt. “You’re excited, is all.”

“Nonsense.” Mutter yanked a towel from its peg and studied her. “You still look a little pale, but a brisk walk across the continent will cure that.” She pressed the towel into Anna’s hand. “Now dry your face and follow me.”

It wasn’t how she looked that concerned Anna, but how she felt about this marriage. Feelings weren’t something Mutter cared to concern herself with.

Anna fell into line behind Mutter, taking slow steps toward the door. The jitters were threatening to topple her when she felt Hattie’s hand on her arm.

With one hand on the doorknob, Mutter grabbed Anna’s hand, pulling her arm from Hattie’s grip. “This isn’t the time for lollygagging.”