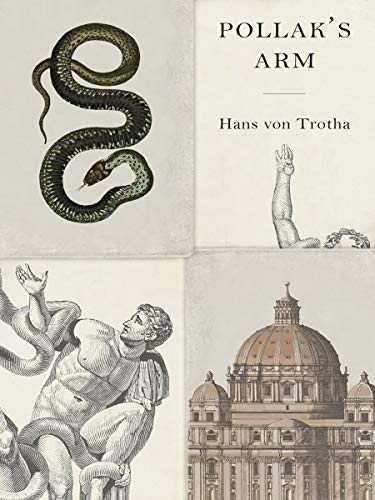 October 16, 1943, inside the Vatican as darkness descends upon Rome. Having been alerted to the Nazi plan to round up the city’s Jewish population the next day, Monsignor F. dispatches an envoy to a nearby palazzo to bring Ludwig Pollak and his family to safety within the papal premises. But Pollak shows himself in no hurry to leave his home and accept the eleventh-hour offer of refuge. Pollak’s visitor is obliged to take a seat and listen as he recounts his life story: how he studied archaeology in Prague, his passion for Italy and Goethe, how he became a renowned antiquities dealer and advisor to great collectors like J. P. Morgan and the Austro-Hungarian emperor after his own Jewishness barred him from an academic career, and finally his spectacular discovery of the missing arm from the majestic ancient sculpture of Laocoön and his sons. Torn between hearing Pollak’s spellbinding tale and the urgent mission to save the archaeologist from certain annihilation, the Vatican’s anxious messenger presses him to make haste and depart. This stunning novel illuminates the chasm between civilization and barbarism by spotlighting a little-known figure devoted to knowledge and the power of artistic creation.

IF THE WEATHER conditions had been better—

That wouldn’t have changed a thing.

You’re right, of course. An SS captain doesn’t take his cues from the weather.

The weather is more likely to take its cues from the SS.

Wasn’t the same once said of Goethe?

Perhaps you’d prefer to write it all down? If so I’ll leave you to it. The room is yours to use as long as you’d like. No one will disturb you. Time is one thing we have in abundance here in the Vatican.

A small room on the ground floor, where little sunlight reaches the large double window. A modern desk lamp with a black metal shade casts its light on the keyboard of a bulky typewriter; along the top of the carriage, Remington stands in peeling gold lettering. It holds a blank sheet of paper.

K. sits at the typewriter, Monsignor F. facing him, late on the afternoon of October 17, 1943. K., a secondary school teacher from Berlin stranded in occupied Rome and harbored in the Vatican, has come to this austere vestibule in a building near the German cemetery Campo Santo Teutonico at the request of Monsignor F., a retired prelate and ecclesiastical diplomat whose German is flawless, virtually accent-less except for a trace of Italian inflection. K., wiry and wan, seems tense. He looks tired. His blue eyes are opened wide, disproportionately large in his narrow face with its taut, pale skin. The monsignor asks K. if he would prefer to tell him his story or write it down. He would rather tell him, K. responds, but isn’t sure he can, doesn’t know where to start.

Giving a personal account. That was something Pollak kept repeating. That we all have a duty to give a personal account. He kept stressing the importance of telling our own stories, passing them on. That was why he wouldn’t let me leave. That was my chance, K. says. I don’t know why Dreyfus, of all people, comes to mind, he continues without pause. The Dreyfus Affair. Perhaps it’s because, at his own mention of Dreyfus, Pollak began to divulge the details of his diary. Or perhaps because I had never considered how an act as blatantly anti-Semitic as convicting a Jewish artillery officer of treason, when he was so obviously innocent, would not only polarize French society, but serve as a frontal blow to Jews—and thus, liberals—across Europe.

The monsignor nods. I was in Paris at the time, he says. Émile Zola was convicted and forced to leave the country. He denounced the outcome of the trial in an open letter, stating that the true culprit had been acquitted and outlining how that had happened. The headline read J’accuse in big letters.

Pollak once caught sight of Dreyfus here in Rome, K. says. He appeared a broken man to him. It’s no wonder. Pollak was standing with his back to the window as he told me about it. Behind him, dusk would soon fall over Rome, I remember thinking, then night. Nights in Rome have been very dark of late.

He clearly remembered writing Dreyfus’s name in his diary, Pollak said. Given the evidence, at that point he still assumed Dreyfus would be acquitted. Everyone did. The century is drawing to a dignified close, he wrote in his diary. Terribly histrionic, he said, but that was how he felt back then. July 1, 1899. He could still see himself writing the date in black ink, the one, the eight, the two nines. That’s the level of detail Pollak went into. Trial in Rennes, charge of treason brought against Jewish officer Alfred Dreyfus. Who can describe the emotion, he wrote, when justice prevails over perfidy. Then came the verdict in September. Five votes yea, two nay, ten years’ imprisonment in light of mitigating factors. It was the first time he ever considered expunging pages from his diary, but there was no blotting out what had occurred, part of which was, of course, one’s views at the time. Truth would not triumph—Pollak’s words—until much later, in 1906.

That was the year Pollak published his findings on the arm, the monsignor interjects.

Yes, K. affirms. The Arm of Laocoön. Brief text, only a few pages long, factual, no frills. No mention of the fact that this arm, of course, changed everything.

There is a pause. The monsignor clearly expects K. to discuss the arm in response to his interjection, but K.’s report is slow in getting off the ground.

When you gave me this order—with all due respect, it was an order, not a request—I agreed without a second thought. I couldn’t have known I would return from the apartment at Palazzo Odescalchi a changed man. I couldn’t have known how trying the visit would become. It changed everything. I never realized how dangerous the situation might be. It never crossed my mind that I might stay as long as I did. Had I considered any of these factors, I wouldn’t have gone. I’m not suited for heroics. Whatever a hero is, K. repeats the monsignor’s rejoinder. You’re right, of course. I suppose there was a reason I failed to make it back to Germany, after all.

The situation in Rome—and with it, in the Vatican—has intensified since Italy surrendered to the Allies on September 8, thus dissolving the country’s allegiance to Germany. The Germans now have full control over the city. Saint Peter’s has been closed for days, the first time this has happened since September 20, 1870, when Rome was captured by Italian forces in the battle against the French for the Vatican. People are seeking refuge in the Vatican in greater numbers than usual, out of fear of the Germans. Even the king’s grandchildren were delivered here without advance notice. In response to the constant threat of air raids, those turned away instead gather outside Saint Peter’s, in the hope that they might find protection in the shadow of the cathedral. The Swiss Guard has been armed with modern weapons since September 9. The few passenger vehicles that leave the Vatican now are quick to return.

You were the first to say it, and after you did, I felt almost ashamed to have thought I’d simply board the train and go home. As it was, I wouldn’t have made it all the way. Since the KLV was instituted—ah, forgive me, Germany has been tending toward abbreviations of late. KLV stands for Kinderlandverschickung, an initiative to evacuate children and mothers from cities, because of air raids. What it means for us teachers is empty schools. It means I’m not returning to work back home in Berlin; they’re expecting me in the countryside of southern Germany. It’s not far from here. That, too, led me to believe it might work. I’ve heard that the northbound tracks are in remarkably good shape. Seems they’re being put to use. Besides, I had no idea where I might stay, where I might feel safe. Or as safe as anyone might feel in Rome these days. I am eternally grateful to you for the room you have provided me here in the Vatican. We’re safe here. Aren’t we? Makes it seem all the more hare-brained to have stayed with Pollak as long as I did. Hare-brained, yet the most important thing I have ever done.

The monsignor, once a tall man but now slightly stooped, the robustness of his presence nevertheless unchanged, sits in an armchair by a dark wooden desk that has clearly been a fixture in the room for a long time, ...