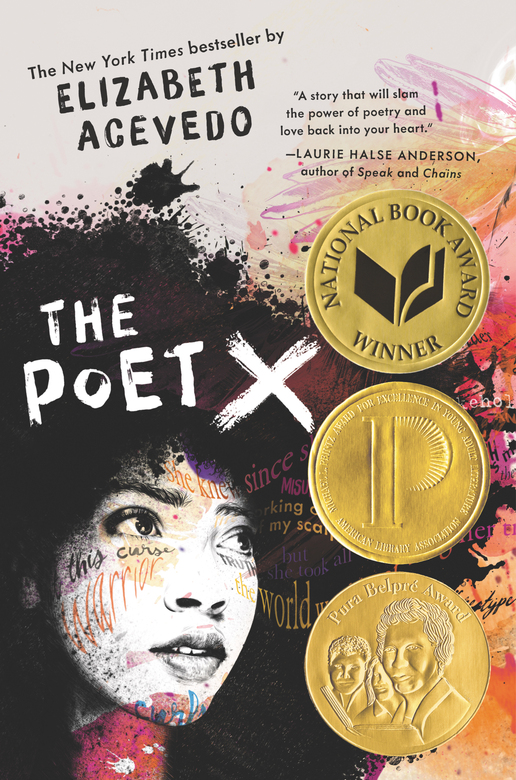 Fans of Jacqueline Woodson, Meg Medina, and Jason Reynolds will fall hard for this astonishing #ownvoices novel-in-verse by an award-winning slam poet, about an Afro-Latina heroine who tells her story with blazing words and powerful truth.

Xiomara Batista feels unheard and unable to hide in her Harlem neighborhood. Ever since her body grew into curves, she has learned to let her fists and her fierceness do the talking.

But Xiomara has plenty she wants to say, and she pours all her frustration and passion onto the pages of a leather notebook, reciting the words to herself like prayers—especially after she catches feelings for a boy in her bio class named Aman, who her family can never know about.

With Mami's determination to force her daughter to obey the laws of the church, Xiomara understands that her thoughts are best kept to herself. So when she is invited to join her school's slam poetry club, she doesn't know how she could ever attend without her mami finding out. But she still can't stop thinking about performing her poems.

Because in the face of a world that may not want to hear her, Xiomara refuses to be silent. 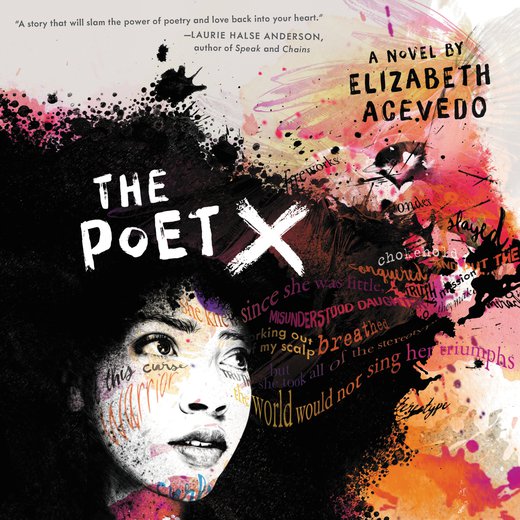 The summer is made for stoop-sitting

and since it’s the last week before school starts,

Harlem is opening its eyes to September.

I scope out this block I’ve always called home.

against the pavement, their mouths letting loose a train

of island Spanish as they spread he said, she said.

Peep Papote from down the block

as he opens the fire hydrant

so the little kids have a sprinkler to run through.

from their open windows

compete with basketballs echoing from the Little Park.

Laugh at the viejos—my father not included—

and yells of “Capicu!”

Shake my head as even the drug dealers posted up

near the building smile more in the summer, their hard scowls

softening into glue-eyed stares in the direction

of the girls in summer dresses and short shorts:

“Ayo, Xiomara, you need to start wearing dresses like that!”

“Shit, you’d be wifed up before going back to school.”

“Especially knowing you church girls are all freaks.”

But I ignore their taunts, enjoy this last bit of freedom,

and wait for the long shadows to tell me

when Mami is almost home from work,

when it’s time to sneak upstairs.

Taller than even my father, with what Mami has always said

was “a little too much body for such a young girl.”

now ask me to send them pictures of myself in a thong.

The other girls call me conceited. Ho. Thot. Fast.

When your body takes up more room than your voice

you are always the target of well-aimed rumors,

which is why I let my knuckles talk for me.

Which is why I learned to shrug when my name was replaced by insults.

I’ve forced my skin just as thick as I am.

Is Mami’s favorite way to start a sentence

and I know I’ve already done something wrong

This time it’s “Mira, muchacha, Marina from across the street

told me you were on the stoop again talking to los vendedores.”

Like usual, I bite my tongue and don’t correct her,

because I hadn’t been talking to the drug dealers;

they’d been talking to me. But she says she doesn’t

want any conversation between me and those boys,

or any boys at all, and she better not hear about me hanging out

or she would go ahead and be the one to wring my neck.

“Oíste?” she asks, but walks away before I can answer.

Sometimes I want to tell her, the only person in this house

I’m the only one in the family

without a biblical name.

I know, because I Googled it.

It means: One who is ready for war.

And truth be told, that description is about right

because I even tried to come into the world

in a fighting stance: feet first.

Had to be cut out of Mami

after she’d given birth

And my name labors out of some people’s mouths

in that same awkward and painful way.

Until I have to slowly say:

I’ve learned not to flinch the first day of school

as teachers get stuck stupid trying to figure it out.

Mami says she thought it was a saint’s name.

Gave me this gift of battle and now curses

how well I live up to it.

They got combat boots and a mouth silent

until it’s sharp as an island machete.

is a phrase I’ve heard my whole life.

When I come home with my knuckles scraped up:

When I don’t wash the dishes quickly enough,

or when I forget to scrub the tub:

when I do well on an exam or the rare time I get an award:

When my mother’s pregnancy was difficult,

and it was all because of me,

because I was turned around

and they thought that I would die

that I would kill her,

so they held a prayer circle at church

and even Father Sean showed up at the emergency room,

as she labored me into the world,

and Papi paced behind the doctor,

but instead of dying I came out wailing,

and the first thing Papi said,

the first words I ever heard,

You sure ain’t an easy one.

Cleaning an office building in Queens.

so she can arrive at the office by eight.

She works at sweeping, and mopping,

emptying trash bins, and being invisible.

Her fingers rubbing the material of plastic gloves

Mami rides the train in the afternoon,

another hour and some change to get to Harlem.

She says she spends her time reading verses,

getting ready for the evening Mass,

and I know she ain’t lying, but if it were me

I’d prop my head against the metal train wall,

hold my purse tight in my lap, close my eyes

against the rocking, and try my best to dream.