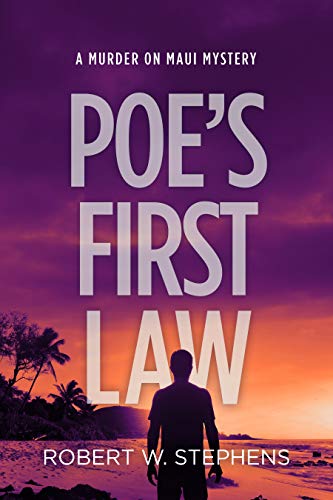 He's used to catching crooks, not proving their innocence. Can this Hawaiian investigator say aloha to the real killer?

Edgar Allan “Poe” Rutherford knows his personal connection to a crime boss is wrong. But when she needs his PI expertise to solve a reopened cold case, he can't refuse the woman who feels like family. The only catch... the police are convinced she's the murderer.

Diving deep into his friend's corrupt empire, Poe chases down a dizzying array of potential suspects. But the further his investigation goes into uncovering alarming secrets, the more he fears his client is guilty of this brutal homicide.

Will Poe clear this mobster's name before he's forced to put her behind bars?

Poe's First Law is the thirteenth standalone novel in the clever Murder on Maui mystery series. If you like charming protagonists, crafty culprits, and the lush backdrop of Hawaii, then you'll love Robert W. Stephens' light-hearted island adventure.