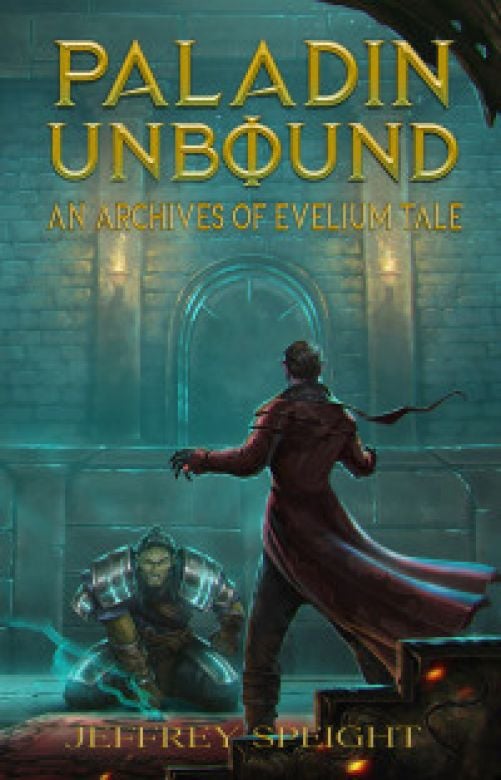 The last of a dying breed, a holy warrior must rise up against a growing darkness in Evelium.

The most unlikely of heroes, a lowly itinerant mercenary, Umhra the Peacebreaker is shunned by society for his mongrel half-Orc blood. Desperate to find work for himself and his band of fighters, Umhra agrees to help solve a rash of mysterious disappearances, but uncovers a larger, more insidious plot to overthrow the natural order of Evelium in the process.

As Umhra journeys into the depths of Telsidor’s Keep to search for the missing, he confronts an ancient evil and, after suffering a great loss, turns to the god he disavowed for help.

Compelled to save the kingdom he loves, can he defeat the enemy while protecting his true identity, or must he risk everything?

…and from the Age of Chaos arose a true King of Men who restored order to Evelium.
—The Gatekeepers’ Abridged History of Tyveriel
Vol. 2, Chapter 34 – Unearthed from the Ruins of Meriden,
the month of Ocken, 1240 AT

The demon-god staggered through the dense woods, his form much diminished, his power drained after a century-long battle. His legions destroyed, he sensed the others hidden in the woods—those he had so fully betrayed were closing in. There was yet one chance at salvation, albeit a despairing one.

Dropping to his knees, he broke the soil, tearing at root and rock—his claws splintering. His amethyst-colored skin was singed and torn, and one of his gnarled horns was broken off at its base. His hunched posture was reminiscent more of a feral beast than an esteemed god of Tyveriel. Stretching his sinuous arms deep into the hole, he closed his vermillion eyes and murmured an incantation in a dying tongue into the rich earth. His failure ensured the language would soon be forgotten in all but the deepest recesses of the realm that should have been his alone.

Within the hole, a red glow emanated from his hands,
the ether slipping between his aching claws. As the radiance
dissipated, a slab of pure rhodium materialized. Upon the metal
slab he had engraved runes in the language of the gods:

From Pragarus I shall return
And all of Evelium shall burn
The blood of twelve thousand souls ensnared
Only the loyal few be spared
I shall ascend to my rightful place
Delivering our world from its fall from Grace
To thee who delivers me from hell
Your eternal thirst, I shall quell

In a frenzy, he buried the tablet and pried a large boulder
from the earth beside him, capping his treasure. His inevitable
salvation now secured, he stood and pressed on through the
lush woods, tree limb after tree limb lashing him as he ran.

“Naur,” a woman’s voice seethed from the edge of the clearing
through which he clambered, “this must end now, brother.”
Vaila emerged from the shade of the tree line, her graceful form
glowing in the early morning sun. Black hair draped flawlessly
across the light-blue skin of her shoulders, her gown radiating
celestial energy of its own.

She carried a great sword in each hand, their hilts fashioned
into angels with outstretched wings extending up the base of the
gleaming blades. She strode forward, two more gods—one with
a body of stone and the head of a great elk, the other a midnight
blue winged-serpent—approaching Naur from behind.

“Vaila, you do not realize how completely you have failed
this world,” Naur said, holding his fists out before him and
summoning a flaming battle ax in each. His brothers behind him
dropped into a defensive crouch, but Vaila continued forward,
undeterred. “Instead of embracing their flaws and appealing to
their strengths, you strive to control the mortal races and sculpt
them into something they are not. I wish only to allow them to
be themselves and fulfill our promise to them.”

“You seek total dominion, Naur,” Vaila said. “Don’t fool
yourself into thinking your actions have come with their best
interests at heart, that you fight us out of altruism. You don’t
care for the mortals. Instead, you would exploit their greatest
weakness, so you alone can rule over them for eternity. Your
game ends now, brother, but only you can determine how.
Whether it be in your death, or your banishment to Pragarus,
makes no difference to us.”

Her words urged Brinthor and Kemyn forward. Naur
glanced back at his brothers and sneered. His lips curling, venom
dripped from a mouthful of fangs down his chin. Brinthor and
Kemyn dismissed the poisonous warning and closed in on their
brother’s flank.

Naur spun and embedded both of his axes into Brinthor’s
lithe form. The great winged serpent screeched in pain. As
Brinthor recoiled, Vaila plunged one of her swords into Naur’s
back, below his right shoulder blade. Without wincing, Naur
turned toward Kemyn and readied his next attack. Kemyn stood
his ground, his hands glowing red, as though made of magma,
flowing into the forms of two stone spikes. Naur tore his axes
from Brinthor’s body and lunged. Kemyn parried Naur’s
attack with one of the spikes and thrust the other into Naur’s
abdomen. Kemyn broke the extremity off within the wound,
leaving himself temporarily hobbled.

With this blow, Naur, the God of Fire, fell to his knees and
laughed—his lifeblood flowing to the forest floor, withering the
flora beneath him. Vaila stepped closer, now looming over him,
her form blocking out the sun. He spat at her gown, covering
her in blood and black venom before her inner light once again
shone through.

“End him,” Kemyn said. “He deserves worse, but death will
rid us of his antics once and for all.”

Kemyn rushed forward and thrust his remaining sharpened
hand at Naur’s head, but Vaila raised her free hand and froze
Kemyn in place, the tip of his weapon inches from dealing a
finishing blow.

“No, Kemyn. I cannot allow you to kill him,” she said. “Naur,
as punishment for your transgressions, your deceit, you shall
be bound to Pragarus for all of eternity. There, you shall fester,
knowing Tyveriel goes on without you. You shall be forgotten in
the annals of history, relegated to the stature of a lesser deity,
and then by only the most disparate recesses of the culture that
flourishes in your absence.”

“Sister,” Brinthor hissed, “as always, I appreciate your sense
of loyalty and justice, but this time you go too far. An honorable
death is more than we owe him, and the cost of binding him to
Pragarus is too great.”

“I understand the cost all too well. The time has come for us
to leave this plane and allow our creation to build its own future.
Find its own path. We have wandered these lands since the dawn
of time and waged war upon it for the last millennium. Tyveriel
needs time to heal. It needs a new beginning. It no longer needs
our interference.” She paused. “Honestly, I am tired. This war
has taken too much from me. We shall recede to the tranquility
of Kalmindon and grant this realm its freedom.”

Vaila finished speaking and thrust her second sword into
Naur’s chest, forming an inverted triangle with his other two
wounds. She impelled the blade through him to its hilt, Naur’s
blood drenching the earth. Vaila released her sword and Naur’s
back arched up toward the heavens in pain, his head bending
backward until it touched the ground. The three wounds burned
with a pure white light that grew in intensity until climaxing at a
level blinding to a mortal’s eye.

Beneath Naur, a great portal opened. Within the swirling
vortex appeared the vision of an arid wasteland. He fought the
power of the portal, forcing himself onto his hands and knees
and peered into the abyss. Accepting his fate, his gaze darted to
his sister, whose lips trembled as tears streaked her face. “Worry
not, sister,” he said, engulfed in the purple aura of the portal.
“You only do what you think is right. You always do. Do not
weep for me, and remember that, for immortals, even eternity
is temporary. We shall see each other again.”

The portal collapsed inward upon itself with a blast of energy,
taking Naur with it and leaving Vaila, Kemyn, and Brinthor alone
in the quiet of the clearing. “Brothers, our war is over,” Vaila
said, releasing Kemyn from her spell. “We have saved Tyveriel,
and now must turn our backs on it and return to Kalmindon.” A
tear shimmering with the purity of a flawless diamond ran down
her face.

Kemyn fell to his knees and glared at Vaila, anger swelling
within him. “I choose to remain in Tyveriel,” he said, pounding
his spear like hand into the ground. “I love this wild land too
much to return to the sanctity of the heavens. Kalmindon, in all
its perfection, holds no salvation for me.”

“I shall stay as well,” Brinthor said, a sheepish expression
coming over his face.

This was one blow too many, and Vaila cried freely. “Brothers,
you know turning away from Kalmindon will strand you on this
plane for all of eternity, but with only a remnant of your godly
powers. I plead you reconsider and join me in ascension.”

“We well know the price of our decision,” Kemyn said. He
climbed to his feet and pointed his unbroken spike at Vaila,
shaking it in contempt. “You are the one who did not consider
everything when you opted to spare Naur. Return to your
heaven, your precious Kalmindon. We choose the mortal plane.”

“If this is your wish, I shall abide by it,” Vaila said. “Just
know all I did was in my best judgment for us and Tyveriel.
Harbor no ill will against me for my shortcomings. I hope you
will miss me as much as I will miss my beloved brothers. Today,
I have lost three.”

“We shall miss you, Vaila, but this is where our paths diverge.
Our best to you, sister,” Kemyn said, softening his tone.

Vaila shut her eyes and smoothed her long hair behind her
shoulders. She placed her hands together and faded from sight.
Their sister having returned to her endless paradise, Kemyn
and Brinthor shifted their physical forms. Kemyn assumed the
form of a majestic elk, and Brinthor changed into a blue dragon.
They looked at one another, Kemyn grunting, no longer able to
communicate with his brother. Brinthor raised his head and
released an earth-shattering roar. With two thrusts of his great
reptilian wings, he lifted off the ground and disappeared into
the cloud-filled sky.

Kemyn scratched the earth with his hoof and sniffed at the
air. After a moment, he leaped into the forest and disappeared
into the wilderness he so loved.