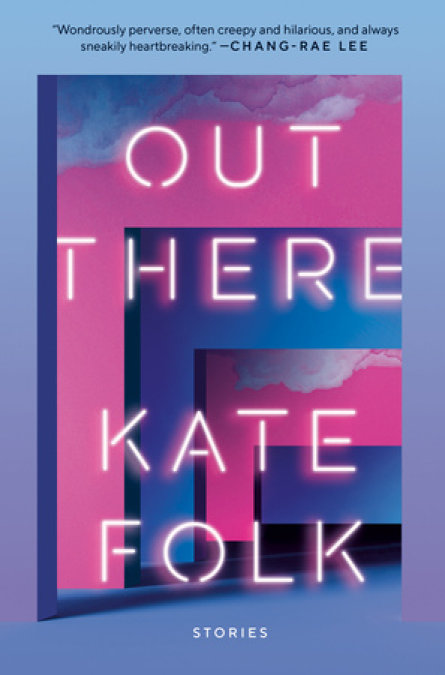 A thrilling new voice in fiction injects the absurd into the everyday to present a startling vision of modern life, “[as] if Kafka and Camus and Bradbury were penning episodes of Black Mirror” (Chang-Rae Lee, author of My Year Abroad).

“Stories so sharp and ingenious you may cut yourself on them while reading.”—Kelly Link, author of Get In Trouble

With a focus on the weird and eerie forces that lurk beneath the surface of ordinary experience, Kate Folk’s debut collection is perfectly pitched to the madness of our current moment. A medical ward for a mysterious bone-melting disorder is the setting of a perilous love triangle. A curtain of void obliterates the globe at a steady pace, forcing Earth’s remaining inhabitants to decide with whom they want to spend eternity. A man fleeing personal scandal enters a codependent relationship with a house that requires a particularly demanding level of care. And in the title story, originally published in The New Yorker, a woman in San Francisco uses dating apps to find a partner despite the threat posed by “blots,” preternaturally handsome artificial men dispatched by Russian hackers to steal data. Meanwhile, in a poignant companion piece, a woman and a blot forge a genuine, albeit doomed, connection.

Prescient and wildly imaginative, Out There depicts an uncanny landscape that holds a mirror to our subconscious fears and desires. Each story beats with its own fierce heart, and together they herald an exciting new arrival in the tradition of speculative literary fiction. 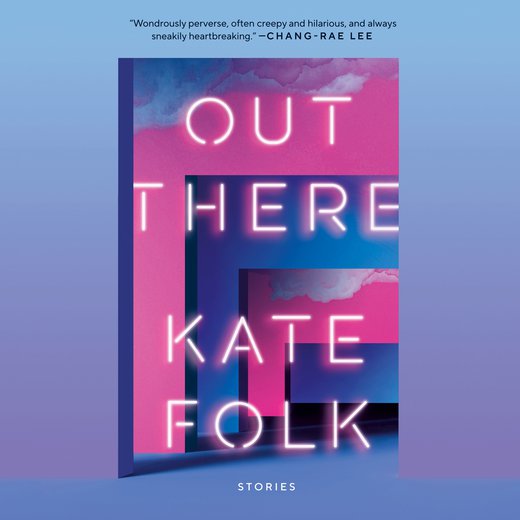 I was putting myself out there. On my return to San Francisco from a gloomy Thanksgiving with my mother in Illinois, I downloaded Tinder, Bumble, and a few other dating apps I’d seen Instagram ads for. I was thirty, too young to accept a life void of excitement, romance, and perhaps, eventually, the lively antics of a child. I resolved to pass judgment on several hundred men per day, and to make an effort to message the few I matched with. I was picky enough that this seemed not wholly absurd. It would be like a new workout routine, a daily regimen to forestall a future of more permanent aloneness, and enjoy my relative youth in the meantime.

I’d never liked the idea of finding a romantic partner on an app, the same way you’d order pizza or an Uber. Such a method seemed to reduce love to another transaction. I had always felt it catered to lazy, unimaginative people. A worthy man would be out in the world doing things, not swiping on women’s pictures in his dim apartment, like a coward. To further complicate matters, it was estimated that men on dating apps in the city were now 50 percent blots. But what choice did I have? Apps seemed to be the way everyone found each other these days. After my last breakup, I spent a while “letting something happen,” which meant doing nothing. Years passed and nothing did happen, and I realized that without my intervention, my hand pushing against the warm back of fate, it was possible nothing ever would. In the end, it seemed to come down to never dating again, or taking the chance of being blotted. Though I supposed there had always been risks.

The early blots had been easy to identify. They were too handsome, for one thing. Their skin was smooth and glowing, and they were uniformly tall and lean. Jawlines you could cut bread with. They were the best-­looking men in any room, and had no sense of humor.

I met one of these early blots several years ago. My friend Peter had invited me to a dinner party hosted by a tech founder he’d grown up with in the Sunset District, and with whom he’d once followed the band Phish around the country, selling nitrous and poppers to concertgoers. Peter and I didn’t ­really hang out, beyond the meetings we attended in church basements for people who no longer drank. But I was bored, and it was a free dinner, and Peter made it sound like he’d already asked a bunch of other people who’d said no, which took some of the pressure off.

At dinner, I sat next to a guy named Roger. He had the telltale blot look—­high forehead, lush hair, shapely eyebrows—­but I didn’t recognize him for what he was, because the blot phenomenon hadn’t yet been exposed. Roger was solicitous, asking about my family, my work as a teacher, and my resentment toward the tech industry. When I declined the server’s offer of wine, Roger’s golden eyes flared with recognition, and he asked if I was in recovery. I said yes, for five years at that point, and he nodded gravely, saying he admired my commitment to this lifestyle; his dear aunt was also sober.

Roger seemed eager to charm, but I was not charmed. I felt spotlighted by his attentiveness, his anticipation of what I might want—­another helping of fava bean salad, more water, an extra napkin when I dropped a chunk of braised pork on my skirt. I would say something self-­deprecating, and he’d regard me steadily and assure me that I was a wonderful person, deserving of all I wanted from life, which wasn’t what I’d been asking for. Roger didn’t know me and wasn’t a credible judge of my worth—­unless his position was that all people had worth, which made him no judge at all. When I shifted the subject to him, he supplied a backstory that seemed pre-­written.

“I came from ranchland in the northern United States,” he told me. “My father was stern but loving, in his way. My mother is a wonderful woman who raised the four of us into strong, capable adults. My childhood was not without hardship, but these adversities shaped me into the person I am today. Now I live in the San Francisco Bay Area, land of innovation and possibility. I am grateful for the life I’ve been given, and I know it is thanks to the people who have loved and supported me on the journey.”

I forced a chuckle of acknowledgment. “Wow,” I said. “That’s great.”

As I drove Peter back to the Richmond District in my decrepit Corolla, he revealed that his friend, the event’s host, had sprinkled the dinner party with blots.

“It’s an acronym for something,” Peter said. “They’re biomorphic humanoids. The latest advancement in the field of tactile illusion.” He paused. “Fake people,” he added.

I concealed my shock, not wanting to give Peter the satisfaction. “So you invited me to be the subject of a Turing test for some company’s new product, without compensation,” I said.

“Yeah. I’m not attracted to them.”

Peter said he hoped I’d written all this on the comment card that had been distributed with the gelato, which asked me to rate my dinner companions’ various attributes. I’d given Roger all fives, out of habit, and in retrospect I was glad not to have aided the blot revolution with my honest feedback.

The blots were originally designed to perform caretaking jobs that necessitated a high level of empathy. They were meant to work in hospices and elder-­care centers, tending to people who were suffering and who would soon die. Such jobs were typically low paying, and it would be better, more ethical, so the thinking went, to place blots in those roles. They would do a fine job, and then after a few months they’d dematerialize, their corporeal presence dissipating into a cloud of vapor.

But aside from a few elite facilities, hospitals weren’t able to invest in the blot program, which was prohibitively expensive and unpopular among donors. The families who could afford top-­flight medical care didn’t like the idea of their loved ones being cared for by blots, even when it was shown that blots performed these tasks more effectively than humans. Soon blot technology was appropriated by a Russian company, and blots were employed in illegal activities—­most commonly, identity fraud. Blots began using dating apps to target vulnerable women. It happened to my friend Alicia, last summer.

“Friend” is a term I use loosely. Alicia was someone I knew from the recovery community. We sometimes went out for food after a meeting, and it was on such an occasion, six months ago, that Alicia told us about her experience with a blot named Steve. I already suspected Alicia had been blotted, because her Facebook profile had engaged me in eerie conversation a few weeks earlier. I have always admired your shoes, she messaged me, late one night, and I thought at first that she’d relapsed and was taking the opportunity to insult me.

Five of us were out at a diner on Geary, a place we liked even though the food was overpriced and bad. Alicia ordered a chocolate milkshake—­like a child, I thought—­and recounted the ordeal. Steve had proposed they go on a weekend trip to Big Sur, after just a few weeks of dating. This was textbook blot, a red flag Alicia should have recognized. Blots always wanted to go to Big Sur, where cell service was spotty, to give themselves some lead time with the victim’s data. They’d lavish a woman with praise, rich food, and vigorous sex, and then in the middle of the night they’d steal the data stored in her phone, copy her credit card info, and disappear with a voluptuous “bloop” sound, like a raindrop hitting the floor of a metal bucket, a cloud of lavender-­scented vapor all that remained.

“I woke up and he was gone,” Alicia said. “The room smelled great, though.”

Alicia canceled her credit cards immediately, but the blot had hacked her laptop and changed all her passwords. It took months to untangle Steve’s work. His tactics were vindictive, and strangely intimate. He’d sent personalized emails to everyone in her contact lists, exploiting every scrap of personal information Alicia had divulged over the weeks they’d dated. On her Facebook page, he posted provocative selfies she’d sent to him or kept on her phone. We had all seen these photos—Alicia, in a lace bralette and thong, posing in a full-­length mirror in the dingy shared bathroom of her apartment, her back arched at what looked like a painful angle to showcase her ass.

At the diner, Alicia framed herself as a woman with a hard-­won ounce of wisdom. “If it seems too good to be true, it probably is,” she said, then kept sucking air through her milkshake straw. I nodded along with the others, thinking that Alicia was an idiot. Steve had not even done a good job of concealing his blot identity, and she’d fallen for it anyway, clinging to the hope that her time had finally come.