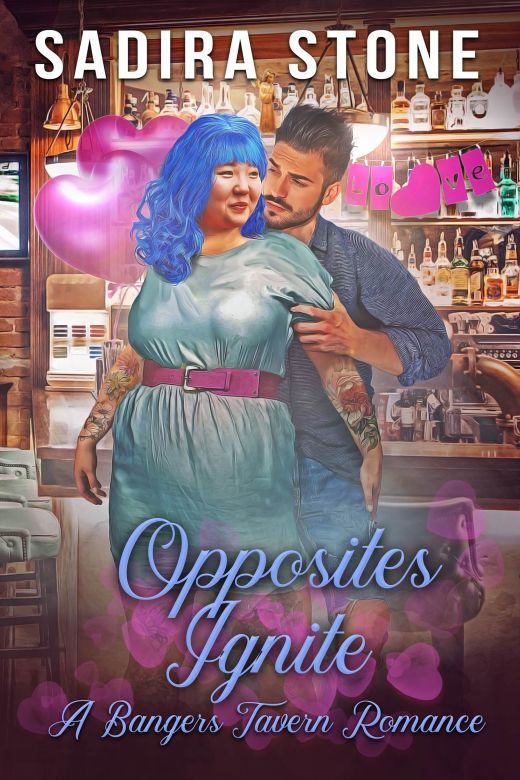 This book will definitely hit you in the feels. Its steamy, witty and I found myself crying and laughing on more than one occasion while reading. Eddie and Rosie are both struggling to find their way in the world without their families trying to influence them. They’ve both experienced disappointments in love and relationships. Eddie is shy, makes lists to stay organized and has had a hard time telling Rosie how he feels about her. Rosie is outgoing, curvy and fairly disorganized. You wouldn't think these two very different people

Once again, author Sadira Stone has not failed her fans with colorful characters in the middle of an equally colorful setting of a family bar like Bangers. As always, her skill for subtle sexual tension, slowly building to a mind-blowing crescendo is very well done. For fans of well-drawn plot lines with steamy romance, terrific characters and snappy dialogue, this is the book for you.

I can’t express how much I adored this story! The sweetest opposites attract, coworkers to lovers book with so much tenderness and major steam! I loved Rosie and Eddie and their families to pieces. A quick read with excellent pacing and so much cuteness you won’t be able to put it down! Highly recommend!

A mismatch sparks the hottest flames.

Blue-haired, buxom, and bodacious, server Rosie needs her job at Bangers Tavern, where her work family adores her weirdness and supports her hunt for a tattoo apprenticeship. When too much New Year’s bubbly tumbles her into a sweet, shy coworker’s bed, she craves more. But guys like Eddie never stick with girls like her.

Strait-laced, soft-spoken, and skinny, barback Eddie has a huge crush on his curvy, tattooed coworker. Their New Year’s surprise is a dream come true—until his grandma walks in on them.  Eddie begs Rosie to fake-date him to appease his old-fashioned family. He’s already keeping secrets, so what’s the harm in one more? But the longer he pretends with Rosie, the deeper he falls.

Their boss lays down the law: No relationship drama at work, or you’re fired. Rosie’s everything Eddie ever wanted—but to keep her, he’ll have to drop a terrifying truth bomb on his loving but stifling family. And Rosie must trust her bruised heart with the guy who nearly crushed it.

Come back to Bangers Tavern for a steamy, laugh-out-loud, opposites-attract romance that ignites in all the worst ways—and the best!

After waking up naked and hungover in Eddie’s bed on New Year’s Day, Rosie realizes it was a huge mistake to hook up with a coworker, especially one as strait-laced and shy as Eddie. He doesn’t see it that way, but reluctantly accepts her decision to remain “just friends.”

Rather than watch Rosie walk out his door, Eddie turned his back and started washing their dirty glasses. The front door clicked open, then she squeaked like a dog’s chew toy. He whirled. “Rosie? You okay?”

She’d frozen in the door frame, clutching her coat to her chest. On the landing stood his grandmother holding a tray.

“Babka!” He rushed to the doorway and stepped in front of Rosie. “Hi. What are you—”

“Surprise, lapochka!” With her ample hip, she nudged him aside and strode through the door, a woman on a mission. “You missed the big family party in Seattle last night, so Dedka and I came down to toast the new year with you.” She set the tray on his kitchen counter and pinched his cheek. “My hard-working boy.” She leaned past him and winked at Rosie. “Always working, this one. But I guess you know that, Miss…?”

Rosie croaked as if she’d swallowed her tongue.

Babka poked his ribs with her sharp elbow. “Why didn’t you tell us about your new girlfriend?” In his grandparents’ old-school world, overnight guest equaled serious relationship, not one-shot misadventure. What a freakin’ disaster.

“Babka, this is Rosie Chu, my friend from work.” A truthful statement, sort of. Hopefully, he and Rosie could get back to being friends someday, once they moved past this awkwardness—maybe in a few months, when the memories of their dead-end passion faded.

Babka flung her arms around Rosie’s middle and squeezed tight. “Such a gorgeous girl. Welcome to the family, sweetheart.”

Rosie’s mouth opened and closed like a startled goldfish. “I, er…” Her wide-eyed gaze met his over the top of Babka’s snow-white head.

“Please,” he silently mouthed, then raised his voice. “Rosie was just leaving. She has a family thing.”

Babka grabbed Rosie’s hand and patted it. “Family is so important, especially on the holidays. You’re what, Korean? How does your family celebrate the new year, darling?”

“I’m half Chinese,” Rosie said, “but we just have a normal American brunch—eggs, hash browns…”

Babka gave a conspiratorial wink. “To tell you the truth, not many of us Volkovs even speak Russian anymore. But we still like our Russian traditions. I made pelmenyi—little meat dumplings. Chinese people love dumplings, right? Come try one before you go.”

With a dismissive wave, she quick stepped to the door. “Oh, I almost forgot.” She pulled his little moleskin notebook from her skirt pocket. “Found this on the landing.”

Relief duked it out with panic as he tucked the notebook into his pocket. If his sharp-eyed grandmother looked between the covers, she’d have questions about his lists of bar equipment, cocktail recipes, sketches of floor plans…

“Both of you, downstairs. Everyone’s waiting.” Babka flashed a grin over her shoulder. “Hurry before Dedka gobbles all the herring.” The door closed behind her with a bang.

Rosie clapped a hand to her mouth. “Herring?”

“With sour cream. Good for a hangover.”

She wrinkled her nose.

No doubt his grandmother was already telling the rest of the family about his new girlfriend. His single status was the source of much consternation at family gatherings, as if he were nearing his expiration date.

He clasped Rosie’s arms. “Look, I know it’s a lot to ask, but could you come down to my parents’ house for just a few minutes?” When her jaw dropped, he added, “They’re really old-fashioned. If they think I’ve had a one-night stand, they’ll be so disappointed in me.” Panic forced his rusty brain wheels into motion. “Please, Rosie, just let them think we’re dating for now. Later, I’ll tell them we broke up.”

Rosie nibbled her bottom lip, a distractingly sexy gesture. Finally, she sighed. “Well, I guess I’m partly to blame for this mess. If a few dumplings will get you out of it, I’m game.”