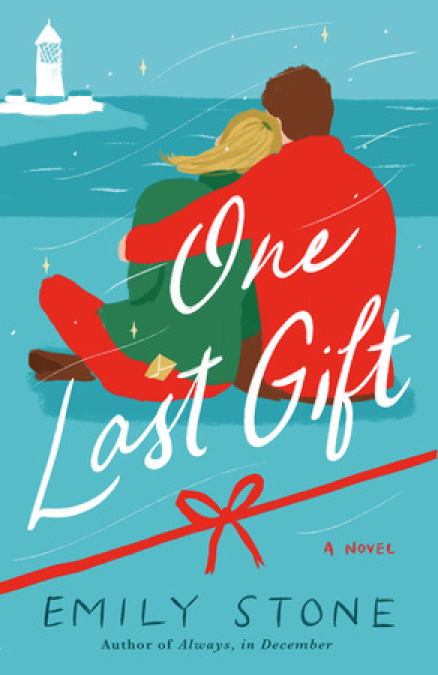 When a young woman finds herself lost and at a crossroads, one last gift from her brother just might give her another chance at life and at love in this epic holiday romance from the author of Always, in December

ONE OF THE BEST BOOKS OF THE YEAR: PopSugar

Sometimes the best gifts in life are the ones you don’t expect.

Cassie and Tom lost their parents at a young age and relied on each other—as well as a community of friends—to cope. They were especially close with Tom’s best friend, Sam, who always made sure that Tom and Cassie were surrounded with love. But, twenty years later, Cassie has lost Tom as well. And in a way, she’s also lost Sam; over the years they’d drifted apart, and now the man she always had a crush on is someone she doesn’t even recognize anymore.

Then Cassie finds an envelope with her name on it, written in Tom’s terrible handwriting, and she knows immediately what it is. It’s the first clue in the Christmas scavenger hunt that Tom made for her every year; he’d promised her for months that this year’s would be the grandest one yet. At first, she’s too scared to open the envelope—what if she can’t figure out the clues without his help? Or what if she does figure them all out and her last connection to Tom is gone?

Tom’s present sets Cassie on a heart-wrenching and beautiful journey that will change her life—if she lets it. And as she travels from London to the Welsh mountains to the French countryside, she reconnects with old friends, rekindles a lost love, and, most important, rediscovers herself. But once she’s solved the final clue, will she be brave enough to accept the gift her brother has given her—and the love it’s led her to? 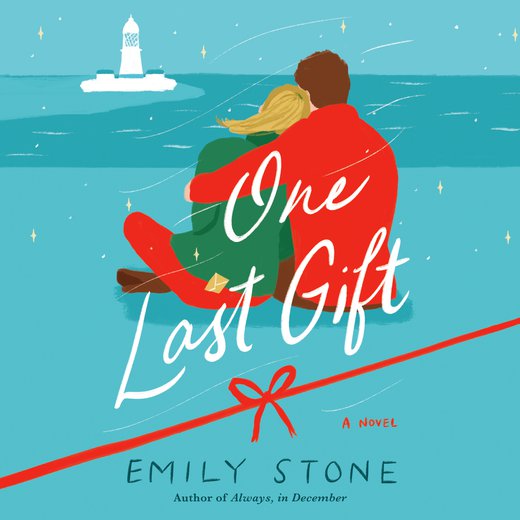 Cassie ducked under the low wooden beam of the doorway and into the warmth of the pub, her hands full, clutching a tray of mince pies. In one corner, logs cracked in the fireplace, and the smell of mulled wine, sherry, pine, and cheese all rolled into one. She walked toward the rustic bar, nodding to a few familiar faces as she passed, the chatter of what must be nearly the entire village washing over her. It made her smile—­everyone out together on Christmas Eve, coming out to an event that she’d helped organize and looking like they were ­really enjoying it.

She caught sight of Tom, leaning against a stone wall and laughing as he threw his head back, his blond hair, almost exactly the same color as hers, flopping to one side. He hadn’t noticed her coming in: he was chatting away to someone who had their back to her, beer in hand. Someone with messy dark brown hair, relaxed posture, a black jacket showing off those impressive shoulders. Her smile got bigger and she tried to ignore the little lurch in her stomach, the way her skin started to buzz.

It’s just Sam, she told herself. Sam, whom she’d known since forever. Sam, her brother’s best friend. She glanced at him once more—­and nearly stumbled straight into the old oak bar, clutching the tray she was holding and throwing it out in front of her to save the mince pies.

“Watch out, Cassie love—­we don’t want to see all your hard work ending up on the floor!” Linda, landlady of The Red House, appeared on the other side of the bar, having come through the double doors that led to the kitchen. She tucked a red-­and-­white tea towel through the belt on her jeans and crossed to Cassie, reached out to take the mince pies, then set them down by the coffee machine.

Linda waved her apology away, her many rings glinting in the candlelight from the candles Cassie had helped set up earlier. “Don’t be silly. You’re a doll for making them, and they look so good I might have to sneak one away before the rabble get their hands on them.” She did just that, grabbing one and taking a bite, and groaning in what Cassie thought was slightly overdone pleasure. A crumb of the pastry stuck to Linda’s red lip gloss, and Cassie wondered if she should tell her. “I can’t believe you whipped these up overnight! You’re a girl of many hidden talents, I tell you.”

Cassie shrugged modestly and decided not to tell Linda about the three batches of pastry that had ended up in the bin, the state of the kitchen earning many a tight-­lipped look from her aunt Claire. But really, what was the alternative? Linda had suggested store-­bought mince pies from Sainsburys for the pub’s annual Christmas Eve event, but Cassie had known that homemade would be better.

The door to the pub opened again, letting in a blast of cool air that managed to reach even the bar. Cassie looked over to see Hazel, her best friend since the beginning of primary school, coming in with her mum. Hazel spotted Cassie and her eyes—­green, not hazel—­sparked as she closed the distance between them with a few long, elegant strides. Cassie clocked the heels that Hazel was wearing and tried not to wrinkle her nose. They always looked ridiculous together when she did that, because of the difference in their heights—­Hazel tall enough to be a professional model, and Cassie, barely making five foot, still short enough to occasionally fit into children’s clothing. Honestly, Cassie had told Hazel that they looked like some kind of double act and that they should be trying to reduce the difference in their heights rather than accentuate it, but Hazel didn’t care. She was confident in her height and was sure it was going to come in useful one day, if only so that she didn’t have to get married just to have someone around to reach the top shelf.

“Happy Christmas Eve!” Hazel gave Cassie a hug—­bending down to do so—­then stepped back and pursed her lips as she studied Cassie, who twirled a strand of her hair back into place behind her ear. Hazel nodded approvingly. “The dress works,” she said decisively, and Cassie felt relief wash over her, as she tried very hard not to glance at the head of messy brown hair behind her. Despite repeatedly telling herself that he was just Sam, she knew she’d bought the dress—­black, tight-fitting, with silver snowflakes on it—­especially for tonight. Because, fine, yes, even if he was just her brother’s best friend, something had changed since he’d gone away for university this year. She’d missed him. More than she’d thought she would. She’d missed Tom too, obviously, even though she still spoke to him all the time on the phone. But she hadn’t expected to miss Sam, his teasing, his easy company, quite so much. Hadn’t expected her heart to jump at the sight of him when he came back for the Christmas holidays.

Hazel grinned down at Cassie, shaking back her dead-­straight black hair—­hair that she dyed to make more black, even though Cassie honestly couldn’t tell the difference. “Come on then, let’s go see the boys.”

Linda winked at Cassie, who felt herself flush a little. It was like she knew exactly who Cassie had worn the dress for—­and the heels, and the brown eyeliner to frame her brown eyes and make them seem warm rather than murky and boring. Not that Cassie had said anything, but Linda had a habit of guessing these things. She might be her boss, but she was more than that too. She was the person Cassie knew she could rely on, no matter what. She’d spent many days growing up hanging out in the pub and sneaking packets of salt-­and-­vinegar crisps after school with Tom. When Cassie had hit sixteen, Linda had created a job for her, even though Cassie knew she didn’t really need the help. And before that, Linda had done the same for Tom.

Hazel marched over to Tom and Sam, leaving Cassie scurrying behind, trying both to look graceful on her heels, and to keep up with Hazel’s long stride. Tom pulled Cassie to him and gave her a one-­armed hug, leaving his arm around her shoulders. “Here’s my girl, and her sidekick.” Cassie smiled, while Hazel waved a hand in the air.

“I’m no one’s sidekick, Rivers.” True, Cassie thought. She often felt like a sidekick to Hazel rather than the other way around. Tom grinned, dropped his arm away from Cassie, and gave Hazel a quick, tight hug. Cassie, meanwhile, tried hard not to look at Sam directly for too long, even though she could feel his gorgeous blue eyes on her, assessing, as he stood there with his thumbs hooked through the belt loops of his jeans, casual as you like. God, since when did she feel so awkward around him?

“How’s the land of university treating you then?” Hazel asked.

Tom wrinkled his nose. “Annoyingly hard work this year.” Cassie had been treated to many a moan already, Tom lamenting all the work he was having to do in his second year of university, comparatively to being a fresher. “Well,” he clarified, “for some of us anyway. Sam here seems immune.” Sam shrugged, and Cassie shifted, relieved to have an excuse to look at him. She smiled, and he nodded back.

“Looking good, Cass.” Cassie felt her cheeks grow warm, and she did a sort of shrug-­nod thing in acceptance of the compliment.

Tom rolled his eyes. “She ought to, the amount of time she spent with that bloody hair rod.” Cassie flushed more, and ­really hoped it wasn’t as obvious as it felt. She shot Tom a glare, which he ignored.

Hazel came to Cassie’s rescue, giving Tom a friendly punch on the arm. “It’s Christmas Eve, you idiot, we are supposed to dress up and look pretty.”

“Well, you do,” Sam said, looking at Cassie. “Look pretty, that is.” He glanced at Hazel, almost like an afterthought. “Both of you.”

Hazel shot Cassie the briefest of knowing glances that Cassie didn’t dare return, even though the back of her neck was sparking with heat. “Well, Rivers,” Hazel said, “I think it’s about time you bought me a welcome-­home drink, isn’t it?”

Tom raised his eyebrows. “Surely if it’s me who’s coming home, you need to buy the welcoming drink, Niagara.” Niagara. Tom and Sam had come up with the nickname, feeling incredibly clever, because of Niagara Falls, and the fact that it was a tall waterfall. Instead of getting wound up by it, Hazel had decided to own the name, and it had sort of stuck.