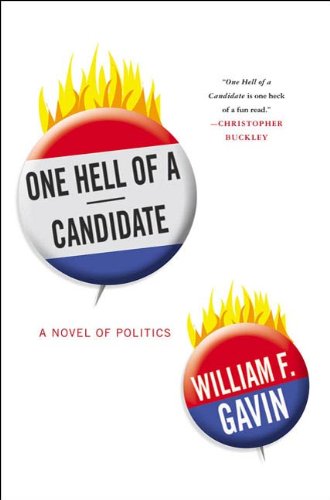 One Hell of a Candidate

One Hell of a Candidate traces the fate of Republican Congressman T. Claude "Buzzer" LeBrand who hails from the Sixth--an imaginary Southern district that has fallen on hard economic times. Poor Buzzer has barely survived his last election when videotape of him frolicking with bikini-clad bimbos in St. Kitts ends up on the evening news. And just as his political career lacks any sort of pulse, Buzzer has a heart attack in a D.C. Metro station, hits his head on the escalator, and falls into a coma.

As Buzzer's life hangs in the balance, the machinations to fill his seat in Congress begin. A slew of politically hopeless characters emerge in the battle for Buzzer's seat.

Among them are Bobby Diddie Ricky, a handsome black Democrat who is a former pro football star running on the largely inane "Team Concept." "Holy Joe" Wholey who believes the Ten Commandments should be amended into the Constitution. Bo Beaumont, owner/tyrant of Big Bo Stores and Republican kingpin. Susan Weinstein, a Jewish lebsian Marxist down from New York to teach the ignorant people of the Sixth what's best for them. And of course, Buzzer's wife Georgie, who if she can put down the bottle and remember the message, would make one hell of a candidate.