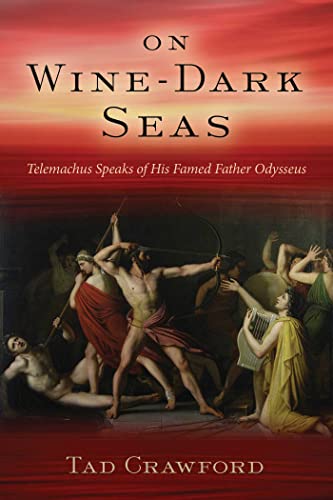 A masterful continuation of the journey of Odysseus after he returned home from his odyssey.

Here is a brilliant recounting of the life of Odysseus after his safe return to the island of Ithaca, his wife Penelope, and his son Telemachus. Countless readers have thrilled to the adventures of Odysseus in The Iliad and The Odyssey, but what further adventures awaited him after his ten years of war and ten years of wandering?

Narrated by Telemachus to the bard Phemios, On Wine-Dark Seas speaks of the human drama of a man gone twenty years from home and family, a man who saw Troy on the night of its destruction, a man who lives the special quest which is his destiny. In probing the inner journeys of a son and father separated twenty years who must come to terms with each other and their ruthless slaughter of the suitors of Penelope, it reveals the doubts and joys of Odysseus, Penelope, and Telemachus.

As Telemachus tells Phemios: “My father will be known to the future not as the man he was, but as the man of whom you sing. Often at Troy he called himself ‘the father of Telemachus,’ so I too have a part to speak in his story. Wealthy men can pay some poets to chant a story first this way, then another. I cannot offer you wealth to hear me, but only the truth I know.”

The novel is a masterful recreating of the ancient mind, the landscape of Greece steeped in mythos and the gods, and the human dramas of characters made famous for all time by The Iliad and The Odyssey.