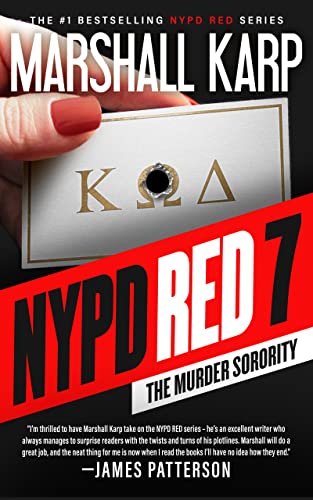 Finding a single assassin in a city of nine million is daunting.
Finding five is a nightmare.

Join the NYPD Red team in their most explosive case ever. The series from James Patterson and Marshall Karp has always been a must-read. But Karp’s latest, NYPD Red 7: The Murder Sorority, tops them all, making it a must-read-now!

And that’s only the beginning. A network of professional assassins is on the loose in New York City. Trained by the US military, they’re on their own now, with a new unit called Kappa Omega Delta. Killers On Demand.

NYPD Red detectives Kylie MacDonald and Zach Jordan are called in to hunt them down, but these mercenaries are as gifted in the art of escape as they are in snuffing out lives.

It’s the biggest professional challenge the Red team has ever faced, and before it’s over, both Kylie’s and Zach’s personal lives will change. Forever.

MY PHONE CHIRPED, and I looked down at the gray text bubble on my screen. It was from Selma Kaplan at the District Attorney’s Office. The message was one I had seen or heard hundreds of times over the course of my career as a cop. Six words that I knew had the power to change people’s lives. What I didn’t know—what I could not even have possibly imagined—is that this time those words would change my life. Forever.

the jury has reached a verdict.

I looked up at my partner, Detective Kylie MacDonald, who had gotten the same text. “It’s about goddamn time,” she said. “How long have they been sequestered? A week? A month? A year?”

“It doesn’t matter, Zach,” she said. “You know how it goes. The longer the jury deliberates, the worse it is for our side. Convictions come fast. Acquittals take forever.”

“Four and a half days isn’t forever.”

“It is this time. Our testimony was airtight. Selma’s closing was brilliant. The case was a slam dunk. If they were going to find him guilty, they could have done it in four and a half hours.”

“Ye of little faith,” I said, grabbing a radio. “Let’s go. Judge Hollander isn’t going to wait for us.”

“You’re betting against us?”

“I’m betting with my head, Zach, not my heart,” she said as we headed down the stairs. “Warren Hellman is filthy rich and has the power to turn ordinary mortals into superstars. There were five women on the jury, and he was eyeball-fucking every one of them. Juror number seven barely looked at me when I testified. She just gawked at him. She probably went home every night, flipped on the TV, and masturbated to his reruns. If anybody turned the jury, it was her.”

A minute later we were speeding toward the Manhattan Criminal Courthouse at 100 Centre Street. Normally we’re too busy to drive downtown and sit through the proceedings just to hear the verdict read. We wait for a call from the DA’s Office and win or lose, we move on

without missing a beat.

But this was different. This time it was personal, and we both wanted to be there when Warren Hellman went down. He’d killed a cop.

The first time I met Jonas Belmont, I was working in the Three-Two up in Harlem. I was a rookie, and he was a legend—a detective first grade with more medals of honor than anyone in the history of the department.

That night, I brought a homeless guy into the station. The desk sergeant got one whiff of the man and asked me what the charges were.

“He was jaywalking, sir.”

The sergeant exploded. “Are you fucking serious, Jordan? Give that bag of shit a summons and get him the hell out of here.”

“I will, sir,” I said, “but if I could just talk to a detective for two minutes.”

“Get him out of here,” the sergeant repeated. “Now.”

I started to leave when a voice boomed out. “Hold it right there, Officer.”

I turned around. A hulk of a man was walking toward me. Six six, ginger hair, muscled chest straining against his suit jacket, and steel-blue eyes that were lasered in on me and my homeless persona non grata.

“And how many foul-smelling, raggedy-ass jaywalkers have you arrested?”

“And I’m betting you’re smart enough to know he doesn’t have the means to pay for a summons even if you slapped him with one.”

I felt a smile coming on, but I held it back. Belmont was on my wavelength. He knew what I was up to, and he was ready to inform the sergeant that he was about to join the party.

“You’re going to have to hold your nose a little while longer, Hank,” Belmont said, “This astute young officer and I are going to take this egregious jaywalker upstairs for questioning.”

Jonas pointed at the derelict’s feet. “The shoes, Sergeant. The shoes.”

The man, a human dumpster from his head to his ankles, was wearing a brand-new pair of rich brown Ferragamo alligator leather

oxfords. As soon as I saw him shuffling across Broadway against the red light, I figured they had to cost a thousand bucks. I was wrong. They were twelve thousand, and two days earlier they had been inside a suitcase that disappeared from a taxi rank outside the Pierre Hotel.

Belmont took it from there, and I watched in awe from the other side of the two-way mirror as he sweet-talked a confession out of the man and got him to give up the name of the pawnshop that was dealing in stolen luggage.

When he was done, he gave me his card. “Good job, kid. Keep in touch.”

Did I ever, hanging around the squad room like a fanboy. Even after he retired, we stayed friends, and every couple of months I’d meet him for dinner and listen to him tell war stories and, of course, brag about his kids.

Evan, who had always wanted to be a cop like his dad, was now a detective working out of the Tenth Precinct in Manhattan. Vivian, who’d had the acting bug ever since she was a kid, had followed her dream to the High School of Performing Arts, then NYU, and was now out there occasionally landing a small part and waiting tables at a restaurant near Lincoln Center, hoping for her first big break.

And that’s where she met Warren Hellman. It started with a simple “Here’s my card. Call my office.” Then came the audition. She was perfect to star in his upcoming series. But of course, other young women were also perfect. The way Hellman spun it, beauty and talent were just the cost of entry. If he was going to work with an actress week in, week out, for the next five years, he had to make sure they had chemistry.

It was heady at first. Restaurants, clubs, paparazzi, a key to his suite at the Sherry-Netherland. She knew there was a price to pay. Sex with a man who repulsed her in every way. But she could do it. She was an actress, and his bedroom was just another stage. The alcohol and the cocaine helped.

The heroin came later. One night she was soaking in the tub, a glass of champagne at her side. The bathroom door opened. “I’m Jeff,” the man said. “Warren had to go to London. He sent me.”

“To keep you company till he gets back,” he said, peeling off his clothes.

pudgy ring finger. “I’m an executive producer on the new show. The networks love the premise, love you, but they’re screaming for script changes before they sign off. Fucking networks, right?”

He produced a glassine envelope and tapped some powder onto the edge of the tub. “Help yourself.”

She put her finger to one nostril and snorted the white line with the other. Nothing. He licked his lips, waiting. And then it hit her. It was like nothing she’d ever felt before. Her body slipped back into the tub as the first wave of heroin bliss enveloped her. She felt his hand between her legs.

“Beats the piss out of cocaine, doesn’t it, sugar?” he said, sliding into the tub with her.

Three months later, hooked on heroin, forcibly removed from the hotel suite, unable to face her friends and family, Vivian Jean Belmont went down into the Columbus Circle subway station and threw herself in front of a moving train. The last dozen calls on her cell phone were all to Hellman. He never picked up. He was three thousand miles away in Hollywood, no doubt exploiting the dreams of other young beautiful women. A month later Kylie and I were called to a town house on East Seventy-First street.