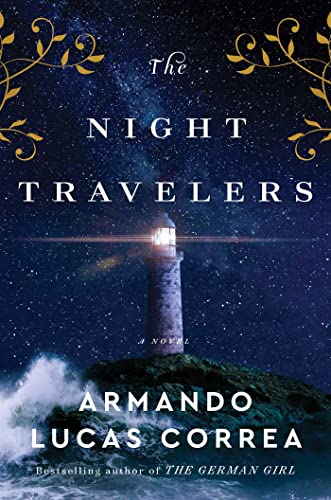 Four generations of women experience love, loss, war, and hope from the rise of Nazism to the Cuban Revolution and finally, the fall of the Berlin Wall in this sweeping novel from the bestselling author of the “timely must-read” (People) The German Girl.

Berlin, 1931: Ally Keller, a talented young poet, is alone and scared when she gives birth to a mixed-race daughter she names Lilith. As the Nazis rise to power, Ally knows she must keep her baby in the shadows to protect her against Hitler’s deadly ideology of Aryan purity. But as she grows, it becomes more and more difficult to keep Lilith hidden so Ally sets in motion a dangerous and desperate plan to send her daughter across the ocean to safety.

Havana, 1958: Now an adult, Lilith has few memories of her mother or her childhood in Germany. Besides, she’s too excited for her future with her beloved Martin, a Cuban pilot with strong ties to the Batista government. But as the flames of revolution ignite, Lilith and her newborn daughter, Nadine, find themselves at a terrifying crossroads.

Berlin, 1988: As a scientist in Berlin, Nadine is dedicated to ensuring the dignity of the remains of all those who were murdered by the Nazis. Yet she has spent her entire lifetime avoiding the truth about her own family’s history. It takes her daughter, Luna, to encourage Nadine to uncover the truth about the choices her mother and grandmother made to ensure the survival of their children. And it will fall to Luna to come to terms with a shocking betrayal that changes everything she thought she knew about her family’s past.

Separated by time but united by sacrifice, four women embark on journeys of self-discovery and find themselves to be living testaments to the power of motherly love.


The night Lilith was born, winter storms raged in the midst of spring.

After the contraction, the very last one, her life would change. Marcus, Ally thought. She wanted to cry out his name.

Marcus couldn’t answer her. He was far away. The only contact they had now was the occasional letter. Ally had started to forget his scent. Even his face had faded into darkness for a moment. She looked down at herself on the bed as though she were some other woman, as though the body in labor wasn’t her own.

After everything they’d been through together, after all they’d said and shared, Marcus had become a shadow to her. Their child would grow up without a father. Perhaps her father had never really wanted her after all. Perhaps this was always meant to be her daughter’s destiny. What right did she have to interfere?

The night Lilith was born, Ally thought of her own mother. She couldn’t recall a single lullaby, an embrace, a kiss. She had spent her childhood surrounded by tutors, perfecting her handwriting and use of language, learning new vocabulary words and proper grammatical constructions. Numbers were a nightmare, science was dull, and geography left her disoriented. All she cared about was escaping into the make-believe stories that led her on journeys back in time.

“Join us in the real world, would you?” her mother would say. “Life isn’t a fairy tale.”

Her mother let her go her own way. She had sensed what Ally’s life would be, and how powerless she was to stop it. Given the direction Germany was heading, she knew that her rebellious, headstrong daughter was a lost cause. With hindsight, Ally could see her mother had been right all along.

“You’re falling asleep.” The midwife’s agitated voice interrupted her thoughts, her hands stained with a yellowish liquid. “You need to concentrate if you want to get this over with.”

The midwife was seasoned: she could boast of the requisite nine hundred hours of training, had helped deliver more than one hundred babies.

“Not a single dead baby, not one. Nor a mother either, not one,” she had told Ally when she took her on.

“She’s one of the best,” the agency had assured her.

“One day we’ll enact a law to make sure that all babies born in our country are delivered by a German midwife,” the woman at the agency had added, raising her voice. “Purity upon purity.”

Perhaps I should have found one with no experience, no idea how to bring a baby into the world, Ally thought.

“Look at me!” the midwife snapped. “Unless you do your bit, I can’t do my job properly. You’re going to make me look bad.”

Ally began to tremble. The midwife seemed to be in a hurry. Ally thought she might have another pregnant woman waiting for her. She couldn’t stop thinking that this woman’s fingers, her hands were inside her, delving around. Saving one life while destroying another.

The night Lilith was born, Ally tried to imagine herself back in the apartment on the riverbank with Marcus: the two of them, hidden in the moonlight, making plans for life as a family, as if such a thing were possible. The morning light always took them by surprise. Caught unawares, they began closing windows and drawing curtains to stay in the dark they’d made their haven.

“We should run away,” she once said to Marcus, while they were lying curled up in bed.

She waited for his response in silence, knowing that for Marcus there could only be one answer. Nobody could convince him otherwise.

“If things are bad for us here, in America it would only be worse,” he would say. “Every day that goes by, more people see us as the enemy.”

To Ally, Marcus’s fear was abstract. It lay in hidden forces, like a gathering wave they couldn’t see, but that would one day, apparently, drown them all. So she chose to ignore Marcus’s forebodings and those of his artist friends; she was hopeful that the storm would pass. Marcus had dreams of working in movies. He had already appeared in one film, in a minor role as a musician, and he had said she should go with him to Paris where he hoped to be cast in another. But then she became pregnant and everything changed.

Her parents were beside themselves. They sent her to live in their empty apartment in Mitte, in the center of Berlin, to hide their shame. They told her that it was the last thing they’d do for her. How she chose to live beyond that point was her problem, not theirs. In the letter her mother had written, she could hear her firm, deliberate voice, with its Bavarian lilt. Ally hadn’t heard from her since.

Ally learned of her father’s death from a notice in the newspaper. The same day, she also received a letter about a small inheritance her father had left her. She imagined that back in Munich there would have been prayers, Ave Marias, veiled windows, and stilted conversations that trailed off into murmurs. She thought of her mother shrouded in mourning, a mourning that for her began the day Ally left. Ally was convinced that when her mother died, she would leave instructions for the news of her death not to be made public, to ensure that her death would go unnoticed, so her daughter wouldn’t get the chance to weep for her. Ally didn’t deserve even that much. Her mother’s vengeance would be silence.

She recalled the feeling of being alone in the vast Mitte apartment, losing herself in its corridors, its rooms full of shadows and painted a muddy green, which she felt would consume her. It was then that the letters from Marcus began to arrive. This isn’t the country I want for my child, don’t come back to Düsseldorf, life here grows more difficult by the day. They don’t want us in America either. Nobody wants us. Sometimes they were not so much answers to her own letters but diatribes.

A cry filled the room. It had come from her chest, her choking throat, her stiffened arms. She felt torn in two. The stabbing pains in her belly spread to her whole body and she clung desperately to the bars of the bed.

“Who’s Marcus? The father? There’s nobody here. Come on now, don’t stop, you’re nearly there. One more push and you’ve done it!”

Her body stiffened and a shiver ran through her. Her lips, trembling, dry. Her belly tensed to a point and then shrank, as though the living being within her had dissolved. She had brought on a storm. She felt the gusts of wind and rain lashing down. Thunderclaps and hailstones pounded her. She was tearing apart. Her abdomen contracted. Opening her increasingly heavy legs, she let something out, a sort of mollusk. A smell of rust invaded the room’s fetid air. The tiny body had taken all the warmth of her belly with it. Her skin quivered.

A lengthy silence. Ally stretched out her legs and closed her eyes. Tears mingled with sweat. The midwife picked up the inert baby by its feet and snipped through the umbilical cord. With the other hand she tossed the placenta into a dish of bloody water, and on one corner of the bed, began to wash the newborn with tepid water.

“It’s a girl.” The midwife’s voice resonated in the room, which was otherwise glaringly silent.

What’s happened? Why isn’t she crying? She’s stillborn, she thought.

Her throat was still burning; her belly throbbed. She could no longer feel her legs.

At that instant, the baby let out a soft whimper like a wounded animal. Little by little, the whimper grew to a howl. Eventually, it became a wail. Ally didn’t react.

Meanwhile, the midwife began rubbing the baby, more relaxed now that she’d done her job. When she saw the bluish tinge of her clean face, her anxiety returned. A lack of oxygen, she deduced. Tentatively, she opened the baby’s mouth and inspected the purple gums. Thinking there might be a blockage in the windpipe, she poked her index finger into the newborn’s tiny throat. She looked at the baby, and at Ally, who still had her eyes closed.

The little baby wouldn’t stop crying as the midwife roughly wrapped her in a clean sheet. Only her face peeped out. The midwife pursed her lips, handing the baby over to Ally the way one transfers a foreign object.

Ally sat up and took the baby on her lap. The newborn instantly settled.