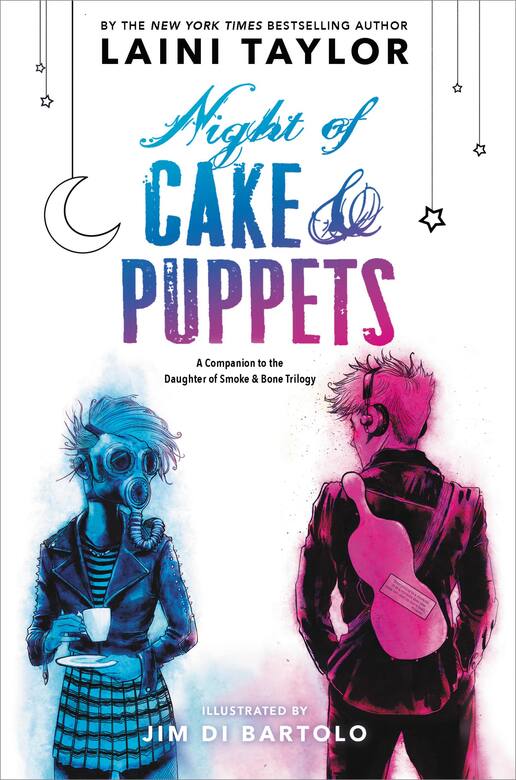 In this stand-alone companion to the New York Times bestselling Daughter of Smoke & Bone series comes the story of Mik and Zuzana's fantastical first date--as a gorgeously illustrated gift edition with bonus content included. Petite though she may be, Zuzana is not known for timidity. Her best friend, Karou, calls her "rabid fairy," her "voodoo eyes" are said to freeze blood, and even her older brother fears her wrath. But when it comes to the simple matter of talking to Mik, or "Violin Boy," her courage deserts her. Now, enough is enough. Zuzana is determined to make the first move, and she has a fistful of magic and a plan. It's a wonderfully elaborate treasure hunt of a plan that will take Mik all over Prague on a cold winter's night before leading him to the treasure: herself! Violin Boy is not going to know what hit him. New York Times bestselling author Laini Taylor brings to life a night only hinted at in the Daughter of Smoke & Bone trilogy--the magical first date of fan-favorites Zuzana and Mik. Originally published as an ebook, this new print edition will include breathtaking black and white illustrations, plus bonus content in a gorgeous package perfect for new and current fans of the series.

The joke was so going to be on us.

“Your grandfather didn’t make it?” she asked, fascinated, putting her face right up to the glass to see the puppet better. It looked even more maniacal than usual by candlelight, with the flickering reflections in its black eyes making it seem to contemplate us.

“Caught it,” Karou repeated. “And where do grandfathers catch… undead fox Cossacks?”

It’s Deda’s best, most terrifying, and all-time most-requested bedtime story, and that’s saying something, because Deda has a lot of stories, each one absolutely true. “If I’m lying, may a lightning bolt slice me in two!” he always declares, and no lightning bolt has yet obliged him, on top of which, for every story, he furnishes “proof.” Newspaper clippings, artifacts, trinkets. When we were little, Tomas and I believed devoutly that Deda himself ran from the rampaging golem in 1586 (he has a lump of petrified clay in the rough shape of a toe), hunted the witch Baba Yaga across the taiga at the behest of Catherine the Great (who presented him an Order of St. George medal for his troubles), and, yes, cornered a marauding undead fox Cossack in a Sevastopol cellar in the final days of the Crimean War. Proof of that escapade? Well, aside from the puppet itself, there’s the scar tissue furling the knuckles of his left hand.

Because, yeah, that’s the story. The puppet… bites.

“What do you mean, it bites?” asked Karou.

“And why would you put your hand in its mouth?”

“Because it doesn’t just bite.” I dropped my voice to a whisper. “It also talks, but only if you let it taste your blood. You can ask it a question, and it will answer.”

“Any question,” said Tomas, also whispering. He’s two years older than me, and hadn’t shown this much interest in hanging around with me in more than a decade. It’s possible it had something to do with my stunning new best friend, who he’d been following around like an assigned manservant. He said, “But only one question per person per lifetime, so it better be good.”

“What did your grandfather ask it?” Karou wanted to know, which is exactly what we wanted her to ask.

“Let me just put it this way: It’s in the case for a reason.”

The story is elaborate and gruesome. Truly, if I ever turn out to be a murderer or something, the newspapers can pretty much say, She didn’t have a chance to be normal. Her family twisted her from the day she was born. Because what bedtime stories to tell little kids! They’re full of corpses and devils and infestations, unnatural things hatching from your breakfast eggs, and the sounds of bones splintering. I thought everyone was like this, that every family had their secret haruspex uncles, their ventriloquist Resistance fighters, their biting puppets. A normal bedtime, Deda would conclude with something like, “And Baba Yaga has been hunting me ever since,” and then cock his head to listen at the window. “That doesn’t sound like claws on the roof, does it, Podivná? Well, it’s probably just crows. Good night.” And then he’d kiss me and click out the light, leaving me to fall asleep to the imagined scrape of a child-eating witch scaling the roof.

And I wouldn’t have it any other way. I mean, who would I be if I’d been raised on milquetoast bedtime stories and not forced to dust the glass prison of a psychotic undead fox Cossack? I shudder to think.

I might wear lace collars and laugh flower petals and pearls. People might try to pat me. I see them think it. My height triggers the puppy-kitten reflex—Must touch—and I’ve found that since you can’t electrify yourself like a fence, the next best thing is to have murderer’s eyes.

The point is, I wouldn’t be “rabid fairy,” which is Karou’s nickname for me, or “Podivná,” either, which is Deda’s. It’s for mucholapka podivná, or Venus flytrap, in honor of my “quiet bloodthirst” and “patient cunning” in my lifelong war with Tomas.

Anyone with an older brother can tell you: Cunning is required. Even if you’re not miniature like me—four foot eleven in a good mood, as little as four foot eight when in despair, which is way too often lately—morphology is on the side of brothers. They’re bigger. Their fists are heavier. Physically, we don’t stand a chance. Hence the evolution of “little-sister brain.”

Artful, conniving, pitiless. No doubt about it, being a little sister—emphasis on little—has been formative, though I take pride in knowing that Tomas is more scarred by years of tangling with me than vice versa. But more than anyone or anything else, it’s Deda who is responsible for the landscape of my mind, the mood and scenery, the spires and shadows. When I think about kids (which isn’t often, except to wish them elsewhere and stop just short of deploying them hence with my foot), the main reason I would consider… begetting any (in a theoretical sense, in the far-distant future) is so that I can practice upon small, developing brains the same degree of mind-molding my grandfather has practiced on us.

I want to terrify little kids, too! I want to build spires in their minds and dance shadows through like marionettes, chased by whispers and hints of the unspeakable.

I want to torture future generations with the Puppet That Bites.

“He asked it how and when he was going to die,” I told Karou.

“And what did it say?” She seemed freaked out, which maybe I should have questioned, because though we’d only been friends for a few months and I knew next to nothing about her, it was clear she was a cool cucumber. The puppet’s a pretty horrible specimen, though, and the storm was loud, the candlelight pale.

The stage was set.

“It opened its bare-bone jaws,” I said, mustering my full theatricality, “and in a voice like dead leaves blowing down an empty street, it told him, though it had no way of knowing his name, You will die, Karel Novak… WHEN I KILL YOU!”

At that moment, Tomas bumped the glass case so that the puppet seemed to jump, and Karou gasped, and then laughed and punched him in the arm.

“You two are terrible,” she said, and that should have been the end of it. That was the extent of our prank—amateur hour, I see that now—but… Karou gasped again. She grabbed my arm. “Did you see that?”

“I swear it just moved.”

And she looked scared. Her breathing went shallow, and she was holding my arm really tight, just staring at the puppet. Tomas and I shared an amused look. “Karou,” I said, “it didn’t move—”

“It did. I saw it. Maybe it’s trying to tell us something. Jesus, it’s probably starving. How long has it been in there, anyway? Don’t you guys ever feed it?”

And the look Tomas and I shared then was more of the um, what? variety, because until that moment, Karou had seemed normal enough. Okay, fine. Karou never seemed normal, with her blue hair and tattoos and drawing monsters all the time, but she did seem mentally sound. But when she started worrying about the skull puppet bei. . .