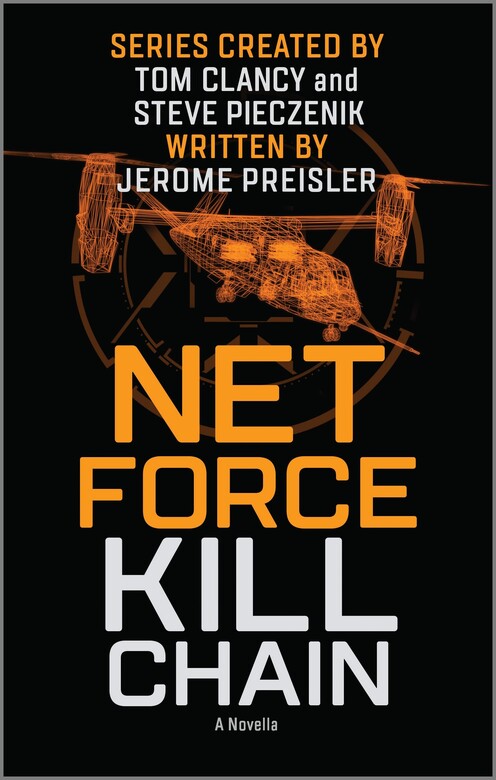 A remote Maine island becomes the setting for a deadly game of cat-and-mouse in KILL CHAIN. Natasha Mori and Bryan Ferrago work for the Net Force Cyber Squad, an elite government agency created to lead the charge against America's online enemies. They've traveled to Maine's coast for a project to study extreme weather forecasting--and hopefully enjoy a little vacation. But someone from Natasha's past has followed them and, as a hurricane approaches, sees a chance to take her out of commission permanently. A team of elite biotech-enhanced mercenaries has been assigned to eliminate her and any witnesses on the island. Stranded in the storm of the century, cut off from all help, Natasha and Bryan must now find a way to escape her hunters--or become part of their murderous kill chain. 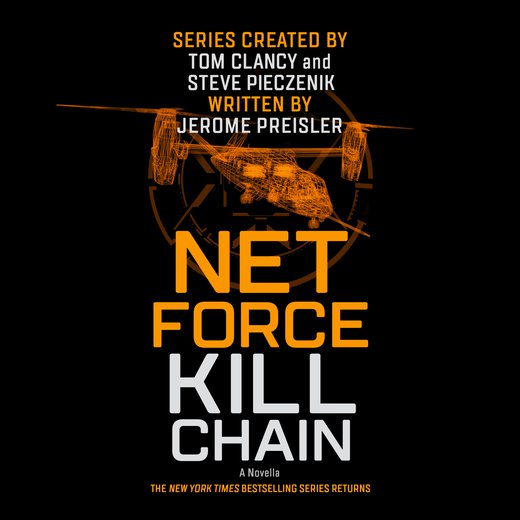 Physically, he was in a huge, fortress-like brick building known as the Terminal in the Hell’s Kitchen section of Manhattan. Converted from a nineteenth-century warehouse, it now served as the New York–East Coast headquarters of the US Department of Internet Security and Law Enforcement.

“Is it?” said Natasha Mori. “I mean, you seriously think so?”

Physically, she was seven miles to his south and across the East River, in the Williamsburg, Brooklyn, apartment she shared with Duncan Ulysses, her temporary roommate and regular collaborator in the electronic house duo, Dev Zero.

Bryan was looking around with fascination.

Natasha smiled. They, or more properly, their avatars, were both inside the Highly Integrated Virtual Environment—HIVE, for short—developed by Net Force’s director-in-chief, Professor Alex Michaels. Not so long ago, it had existed only as a dedicated room in Michaels’s lab at Columbia University, serving as repository of the most destructive malignant software ever created, a kind of digital plague vault. Michaels had

been able to reproduce past cyberattacks for forensic analysis, model a bug’s evolution and internet spread with lifelike simulations, and develop ways to combat it.

These days, the original HIVE was a relic, having reached obsolescence in a hurry. Over the past several months, Michaels had transferred its functionality to standalone VR headsets, allowing authorized users to access it from wherever in the world they might be. With his Net Force recruitment drive in full swing, he’d expanded his conceptual view of the HIVE to make it a kind of virtual assembly hall, where organizational candidates and trainees could come together remotely, exchange ideas, and bond with their far-flung teachers and colleagues in an infinite number of settings.

Thus, Bryan in Hell’s Kitchen, and Natasha in Brooklyn, were for all intents and purposes V-Bryan and V-Natasha, floating as if on a magic carpet through one of her immersive spaces within the HIVE’s vast cloud network.

A space she had filled with butterflies.

Virtual butterflies, of course. Of every species and variety. There were large orange-red monarchs and tiny yellow pygmies. There were swallowtails, metalmarks, brush-foots, peacocks, and hairstreaks; whites, coppers, blues, and sulfurs. Their wings were solid and spotted and banded and veined and almost supernaturally vibrant. They swarmed, clustered, and formed up into pulsing clouds by the hundreds, the thousands, pouring off and separating out and reassembling in kaleidoscopic flight.

Bryan looked mesmerized. His arms around his knees, he stared raptly at the butterflies whisking and eddying around him.

“So,” Natasha said. “How about telling me why you’re here?”

She wondered suddenly if it was all too intense for him. People on the autism spectrum could have a tough time with bright, flashing colors.

“Yeah.” After a minute he turned to her. “Tash...is this your happy place?”

The question caught her off guard. She’d never thought about it in those terms. She groped for a response.

“If you mean happy, happy, I guess that’s when I’m onstage,” she said. “This space... I come here to work things out. It’s different.”

Bryan was quiet. Silky violet wings whispered around his head. A great green Papilio palinurus spiraled on a downdraft in front of him.

He swept his arms out to either side. “Does it help you think?”

“The butterflies, you mean?”

Natasha considered. He was full of surprises today. “It isn’t about thinking,” she said. “I use mood forecasting software. Emotion trackers. They have all kinds of practical applications. But here... I suppose they keep me honest with myself.”

Bryan sat watching a cascade of large red-spotted viceroys. Then he turned back to Natasha. “What are you working out now?”

Silence. He was on a roll. “Actually, it’s personal, so let’s leave it,” she said.

Natasha instantly regretted her brusqueness. Dark butterflies clustered around her.

“You still all right?” she said.

“I’ve never let anybody into this space. Which makes you special,” she said. “It’s called ‘The Butterfly Catcher.’ After an old song I learned in Russia. When I was a brat.”

They were quiet amid the flutter of countless wings, all delicate as a small child’s breath.

Natasha nodded. “Take it away.”

The butterflies suddenly parted in front of her, peeling back like a huge shimmering curtain. Then bright sunlight was in her eyes. There was an expansive blue sky, water of a deeper blue. And up ahead, a patch of white sand beach at the foot of a low ridge. Thin, straggly trees stood atop the slope, their exposed roots clinging like tentacles.

“Bry, whoa, this is incredible!”

They glided toward it, riding a few yards above the water’s surface. As they neared the beach, Natasha glanced past Bryan to their right and saw a broad channel separating Chacagua from the opposite shore. To their left, a much narrower inlet snaked between the island and a bare rock wall thrusting about 300 feet into the air—over twice as high as the island’s bluffs. It was nearly vertical and stripped of vegetation.

Bryan noticed her looking up at it.

“That’s Eagle Cliff,” he said. “The inlet’s always calm. Having those slopes either side shelters it from the weather. When the water was low we’d wade from the island to the cliffs on an intertidal bar.”

“I’ll explain later,” Bryan said. “The Chacaguans did it too. Walked across to shore, that is. They came, traded pottery and stuff, and then went back home to the island. But that was a long time ago.”

They approached the beach. As they drew close, she realized it wasn’t sand at all but countless pulverized, sun-bleached shell fragments.

“Do people live in this island paradise?”

He shook his head.

“It’s deserted,” he said. “Once in a while, scientists come for a project. But that’s it.”

They glided forward. The breeze rippled the water’s surface. He glanced over at her. “I’m visiting Chacagua the week after next. When we’re off from work.”

She nodded her understanding. It was coming up on spring break at the CyberOperations Training Center—Net Force Boot Camp, for short—where both were instructors.

“Totally. We’d camp out overnight. And then look in on my mom’s place. She still lives in Bishop, my hometown. It’s across the bay. But she’s been wintering in Florida since she retired from the NOAA.” He paused. “Her heat and water’s turned off, but there are three bedrooms. So we could stay overnight.”

Natasha was still looking at him. “Just so we’re straight,” she said. “You want me to join you for an overnighter. Outdoors on a deserted island.”

“Then for a pj party at your snowbird mom’s unheated, water-free house.”

Natasha was thinking the response was pure Bryan. Candid, guileless, and clueless.

“Not so fast,” she said. “Last time I checked, this was April. Isn’t April still cold in Maine?”

“Because I had enough cold to last a lifetime in Russia.”

“I checked the forecast, Tasha. It might be a little chilly at night. But we’ll have outdoor blankets in our packs. And we can get the wood stove going at my mom’s.”

She hesitated. Then hesitated some more. “I admit, your offer’s perversely tempting,” she said. “But I have four shows at the club. Friday and Saturday night...”

“I can pick you up right after your last set. I’ll bring sandwiches.” He paused. “I make primo sandwiches.”

She looked at him.

“Question, Bry...how long have you had this worked out?”

Candid, guileless, clueless, and very precise. She sat looking at the virtual island shoreline. “Bryan and Natasha’s Great Adventure,” she said. “It does have a ring.”

“You’ll love Chacagua,” he said. “And you could help with mom’s research there. It ties in with what we do at Net Force.”

“Wait. A minute ago you told me Annie retired.”

“She did. Officially, anyway. But she’s still kind of involved. Also, I want to introduce you to something.”

He gave another nod. Natasha looked at him.

“The Internet of Trees,” he said, and smiled his broadest, most openly enthusiastic smile yet.