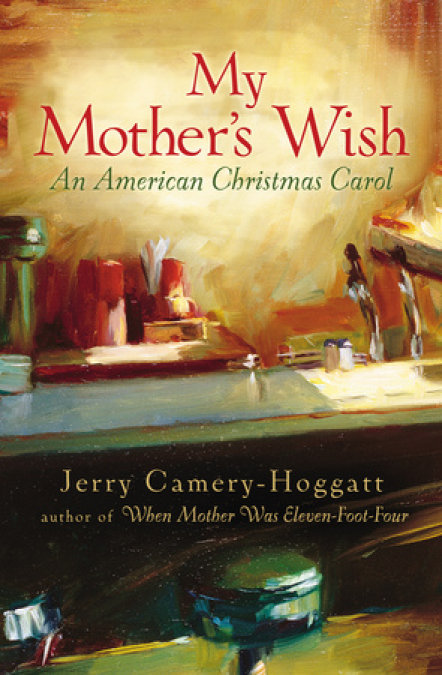 Something strange is brewing at the Comeback Café

A grandfather’s song has turned a diner into hallowed ground. A contrary girl with a gypsy heart feels the tug of home. And a truck driver named Jedidiah keeps his foot on the gas, ready to sweep you into an unforgettable story of belonging and grace.

It’s the 1960s Midwest, and Ellee Crumb wants to change the world, starting with her mother, but she’s having trouble even getting her teachers to know her real name. So Ellee sits at the Comeback, her broken heart lying there on a table, when a three-armed waitress and a quirky stranger show up and hand her back the pieces.

An affecting tale, My Mother’s Wish will remind you of the power of grand hopes and effect of impossible expectations. You’ll witness the influence every life has on another, and you’ll find new reasons to believe in the comfort and joy in an everyday, American version of the story of Christmas: being known and loved, just as you are.

The Spanish poet Juan Ramón Jiménez said that if they give you ruled paper, you should write the other way. That’s pretty much the story of my life, writing the other way, across the lines, against the grain. I mean this literally. I write my grocery list sideways on the page. I sign my name, Ellee, on the upslope, diagonally across the little boxes they give you on official forms. Ever since the third grade, I’ve written out my Christmas wish list sideways, running the words up from the bottom, against the grain of the lined paper my mother posts on the refrigerator door. I also write my life story across the lines. I mean this literally too. I write my diary from back to front, too. I hold the book so the pages open from the bottom up, but because I write from back to front, you have to read contrariwise.

A fine word, contrariwise. Rolls off the tongue like a marble. It’s the best word I know.

I learned it in the seventh grade. I was sitting with my older sister, Susan, next to the entrance to the boys’ locker room, watching the rest of the student body mill around like a herd of wildebeests, when that stupid Joey Tyndale rushed up and tried to kiss her. I learned later that he had been taking a dare–things like that happened sometimes to Susie because she’s so much prettier than I am–but at the time I didn’t know that. Susie almost died of course because Joey Tyndale is a big, lumbering, stupid boy, and in her desperation to get away she knocked my backpack off the bench, and my diary fell out, faceup, on the cracked blacktop of the basketball court.

Miss Buttram, the vice principal, was there in six seconds flat, her first priority to protect Susie (she would have taken a bullet for Susie, she was such a good girl), but I think the real reason was that Miss Buttram loves a good fight on the school grounds. Miss Buttram doesn’t have a husband at home to fight with, so she takes her satisfactions where she finds them–the fighting of seventh graders on the playground of the Woodrow Wilson Junior High School, where she has been vice principal since she was thirteen. Nothing gets a vice person’s vice principal sap flowing like a good playground brawl.

I scrambled for the diary but not before Joey saw it and beat me to it, picking it up and taunting me with it. He danced what he thought was a little jig. It was not. He was too big and lumbering to dance a little anything.

Joey held the diary high so everybody could see, and I started to jump for it.

“Give it back,” I said as forcefully as I could with my teeth gritted so nobody else would hear me.

He held the diary higher.

Susie backed away, afraid of getting into trouble, and the small herd of wildebeests that had crowded around us swallowed her up like the phagocytes Mr. Frazier talked about in seventh grade science. Mr. Frazier lived and breathed phagocytes. Every single spelling test he ever gave had the word phagocyte on it.

In the corner of my eye, I could see Miss Buttram checking that Susie had not been hurt. It was like that with Susie. Before each school year, the teachers and playground supervisors at our school had a ceremony where they signed a blood pledge that they wouldn’t ever, ever let anything hurt Susie McKutcheon, she was so pretty and good.

I bumped against Joey’s body as I jumped for my diary, which was like belly-bumping a large marshmallow with arms. “Give it, Joey!” I bit my lip to keep from crying.

When Miss Buttram had finished checking on Susie, she waded into the herd of wildebeests, using all four of her arms to windmill her way through.

“Joey!” That was all Miss Buttram said. It was enough because she used her megaphone voice, which could be heard more than a quarter of a mile away on the top of the water tower with the name of the our town, BLACKWATER, painted in large block letters on the side.

There’s a rumor that Miss Buttram trained for the vice principal’s job by doing a stint with the Green Berets, but I don’t believe it. The Green Berets still exist, and they still fight, and that wouldn’t be true if Miss Buttram had crossed their path. She would have put a stop to that too. I can easily picture her windmilling Green Berets left and right, all four arms in action. So maybe the rumor was true. She clomped around the school in saddle oxfords because they were the closest thing she could find to combat boots.

Joey held the book high, beyond my reach.

He handed it to her, reaching past me, over my head, to do it.

“Joey. Tyndale. Wait. For. Me. In. My. Office,” she said. At Teacher College she had learned to speak in oneword sentences. For her it was a practiced art form, a kind of vice principal’s cement poetry. Literally. The words came out in cement. One of them fell on Joey’s foot, and he limped away, whimpering.

She began turning the pages of the book, slowly examining them one at a time as though it were the Book of Life. She wondered, I’m sure, if her name was written therein. It was not.

“You really do write backward, Eleanor,” Miss Buttram said. “Why do you do that?”

“Ellee,” I corrected. Then I said, “It’s private,” to answer her question. It was a partial answer. Writing your diary across the lines seems to me to be an act of self-preservation. I am a pledged disciple of Rosa Parks, a Full Gospel Suffragette. There was a long pause as she examined the pages. The wildebeests lost interest and drifted away, looking for grass. “It’s my diary,” I said again. “A person has rights.”

“Not on my campus,” she snapped. She moved her lips, trying to read her way past the puzzling secret backward organization of the diary.

“Not on my campus,” Miss Buttram said again. Honestly, you’d think a Green Beret would understand why people write in code sometimes. “You do everything that way,” she said.

The word was wonderful. Contrariwise. As it came out of her mouth it took wings. I was so startled I almost gave up on the diary. But not my name. “Ellee,” I corrected. Then, “Can I have my diary back, Miss Buttram?”

She handed me the book. “There’s a right way to do everything, Eleanor, and a wrong way. You always choose the wrong way.”