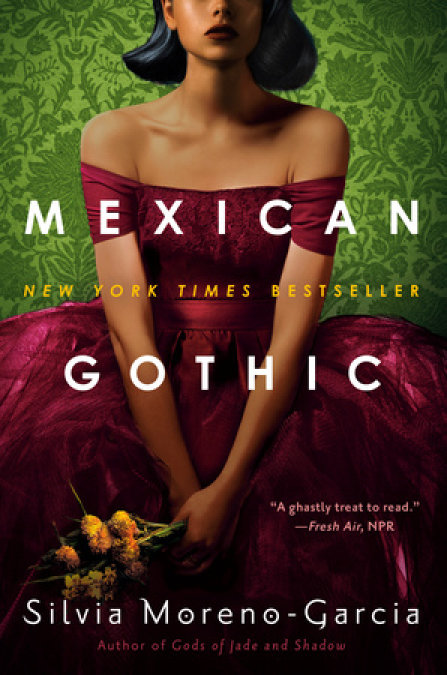 After receiving a frantic letter from her newly-wed cousin begging for someone to save her from a mysterious doom, Noemí Taboada heads to High Place, a distant house in the Mexican countryside. She's not sure what she will find—her cousin's husband, a handsome Englishman, is a stranger, and Noemí knows little about the region.

Noemí is also an unlikely rescuer: She's a glamorous debutante, and her chic gowns and perfect red lipstick are more suited for cocktail parties than amateur sleuthing. But she's also tough and smart, with an indomitable will, and she is not afraid: Not of her cousin's new husband, who is both menacing and alluring; not of his father, the ancient patriarch who seems to be fascinated by Noemí; and not even of the house itself, which begins to invade Noemi's dreams with visions of blood and doom.

Her only ally in this inhospitable abode is the family's youngest son. Shy and gentle, he seems to want to help Noemí, but might also be hiding dark knowledge of his family's past. For there are many secrets behind the walls of High Place. The family's once colossal wealth and faded mining empire kept them from prying eyes, but as Noemí digs deeper she unearths stories of violence and madness.

And Noemí, mesmerized by the terrifying yet seductive world of High Place, may soon find it impossible to ever leave this enigmatic house behind. 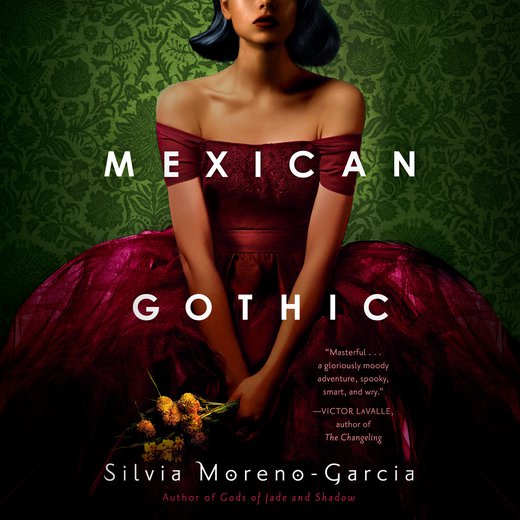 The parties at the Tuñóns’ house always ended unquestionably late, and since the hosts enjoyed costume parties in particular, it was not unusual to see Chinas Poblanas with their folkloric skirts and ribbons in their hair arrive in the company of a harlequin or a cowboy. Their chauffeurs, rather than waiting outside the Tuñóns’ house in vain, had systematized the nights. They would head off to eat tacos at a street stand or even visit a maid who worked in one of the nearby homes, a courtship as delicate as a Victorian melodrama. Some of the chauffeurs would cluster together, sharing cigarettes and stories. A couple took naps. After all, they knew full well that no one was going to abandon that party until after one a.m.

So the couple stepping out of the party at ten p.m. therefore broke convention. What’s worse, the man’s driver had left to fetch himself dinner and could not be found. The young man looked distressed, trying to determine how to proceed. He had worn a papier-­mâché horse’s head, a choice that now came back to haunt him as they’d have to make the journey through the city with this cumbersome prop. Noemí had warned him she wanted to win the costume contest, placing ahead of Laura Quezada and her beau, and thus he’d made an effort that now seemed misplaced, since his companion did not dress as she had said she would.

Noemí Taboada had promised she’d rent a jockey outfit, complete with a riding crop. It was supposed to be a clever and slightly scandalous choice, since she’d heard Laura was going to attend as Eve, with a snake wrapped around her neck. In the end, Noemí changed her mind. The jockey costume was ugly and scratched her skin. So instead she wore a green gown with white appliqué flowers and didn’t bother to tell her date about the switch.

“Three blocks from here there’s a big avenue. We can find a taxi there,” she told Hugo. “Say, do you have a cigarette?”

“Cigarette? I don’t even know where I put my wallet,” Hugo replied, palming his jacket with one hand. “Besides, don’t you always carry cigarettes in your purse? I would think you’re cheap and can’t buy your own if I didn’t know any better.”

“It’s so much more fun when a gentleman offers a lady a cigarette.”

“I can’t even offer you a mint tonight. Do you think I might have left my wallet back at the house?”

She did not reply. Hugo was having a difficult time carrying the horse’s head under his arm. He almost dropped it when they reached the avenue. Noemí raised a slender arm and hailed a taxi. Once they were inside the car, Hugo was able to put the horse’s head down on the seat.

“You could have told me I didn’t have to bring this thing after all,” he muttered, noticing the smile on the driver’s face and assuming he was having fun at his expense.

“You look adorable when you’re irritated,” she replied, opening her handbag and finding her cigarettes.

Hugo also looked like a younger Pedro Infante, which was a great deal of his appeal. As for the rest—­personality, social status, and intelligence—­Noemí had not paused to think too much about all of that. When she wanted something she simply wanted it, and lately she had wanted Hugo, though now that his attention had been procured she was likely to dismiss him.

When they arrived at her house, Hugo reached out to her, grasping her hand.

“Give me a kiss good night.”

“I’ve got to run, but you can still have a bit of my lipstick,” she replied, taking her cigarette and putting it in his mouth.

Hugo leaned out the window and frowned while Noemí hurried into her home, crossing the inner courtyard and going directly to her father’s office. Like the rest of the house, his office was decorated in a modern style, which seemed to echo the newness of the occupants’ money. Noemí’s father had never been poor, but he had turned a small chemical dye business into a fortune. He knew what he liked and he wasn’t afraid to show it: bold colors and clean lines. His chairs were upholstered in a vibrant red, and luxuriant plants added splashes of green to every room.

The door to the office was open, and Noemí did not bother knocking, breezily walking in, her high heels clacking on the hardwood floor. She brushed one of the orchids in her hair with her fingertips and sat down in the chair in front of her father’s desk with a loud sigh, tossing her little handbag on the floor. She also knew what she liked, and she did not like being summoned home early.

Her father had waved her in—­those high heels of hers were loud, signaling her arrival as surely as any greeting—­but had not looked at her, as he was too busy examining a document.

“I cannot believe you telephoned me at the Tuñóns’,” she said, tugging at her white gloves. “I know you weren’t exactly happy that Hugo—­”

“This is not about Hugo,” her father replied, cutting her short.

Noemí frowned. She held one of the gloves in her right hand. “It’s not?”

She had asked for permission to attend the party, but she had not specified she’d go with Hugo Duarte, and she knew how her father felt about him. Father was concerned that Hugo might propose marriage and she’d accept. Noemí did not intend to marry Hugo and had told her parents so, but Father did not believe her.

Noemí, like any good socialite, shopped at the Palacio de ­Hierro, painted her lips with Elizabeth Arden lipstick, owned a couple of very fine furs, spoke English with remarkable ease, courtesy of the nuns at the Monserrat—­a private school, of course—­and was expected to devote her time to the twin pursuits of leisure and husband hunting. Therefore, to her father, any pleasant activity must also involve the acquisition of a spouse. That is, she should never have fun for the sake of having fun, but only as a way to obtain a husband. Which would have been fine and well if Father had actually liked Hugo, but Hugo was a mere junior architect, and Noemí was expected to aspire higher.

“No, although we’ll have a talk about that later,” he said, leaving Noemí confused.

She had been slow dancing when a servant had tapped her on the shoulder and asked if she’d take a call from Mr. Taboada in the studio, disrupting her entire evening. She had assumed Father had found out she was out with Hugo and meant to rip him from her arms and deliver an admonishment. If that was not his intent, then what was all the fuss about?

“It’s nothing bad, is it?” she asked, her tone changing. When she was cross, her voice was higher-­pitched, more girlish, rather than the modulated tone she had in recent years perfected.

“I don’t know. You can’t repeat what I’m about to tell you. Not to your mother, not to your brother, not to any friends, understood?” her father said, staring at her until Noemí nodded.

He leaned back in his chair, pressing his hands together in front of his face, and nodded back.

“A few weeks ago I received a letter from your cousin Catalina. In it she made wild statements about her husband. I wrote to Virgil in an attempt to get to the root of the matter.

“Virgil wrote to say that Catalina had been behaving in odd and distressing ways, but he believed she was improving. We wrote back and forth, me insisting that if Catalina was indeed as distressed as she seemed to be, it might be best to bring her to Mexico City to speak to a professional. He countered that it was not necessary.”

Noemí took off her other glove and set it on her lap.

“We were at an impasse. I did not think he would budge, but tonight I received a telegram. Here, you can read it.”

Her father grabbed the slip of paper on his desk and handed it to Noemí. It was an invitation for her to visit Catalina. The train didn’t run every day through their town, but it did run on Mondays, and a driver would be sent to the station at a certain time to pick her up.

“I want you to go, Noemí. Virgil says she’s been asking for you. Besides, I think this is a matter that may be best handled by a woman. It might turn out that this is nothing but exaggerations and marital trouble. It’s not as if your cousin hasn’t had a tendency toward the melodramatic. It might be a ploy for attention.”

“In that case, why would Catalina’s marital troubles or her melodrama concern us?” she asked, though she didn’t think it was fair that her father label Catalina as melodramatic. She’d lost both of her parents at a young age. One could expect a certain amount of turmoil after that.

“Catalina’s letter was very odd. She claimed her husband was poisoning her, she wrote that she’d had visions. I am not saying I am a medical expert, but it was enough to get me asking about good psychiatrists around town.”

“Do you have the letter?”