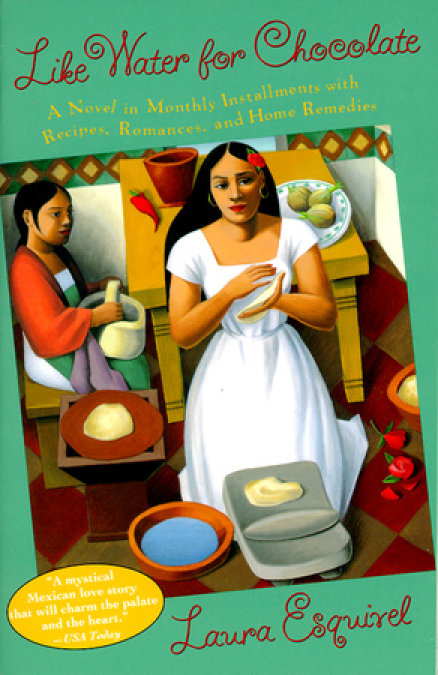 Earthy, magical, and utterly charming, this tale of family life in turn-of-the-century Mexico became a bestselling phenomenon with its winning blend of poignant romance and bittersweet wit.

The classic love story takes place on the De la Garza ranch, as the tyrannical owner, Mama Elena, chops onions at the kitchen table in her final days of pregnancy. While still in her mother's womb, her daughter to be weeps so violently she causes an early labor, and little Tita slips out amid the spices and fixings for noodle soup. This early encounter with food soon becomes a way of life, and Tita grows up to be a master chef. She shares special points of her favorite preparations with listeners throughout the story. 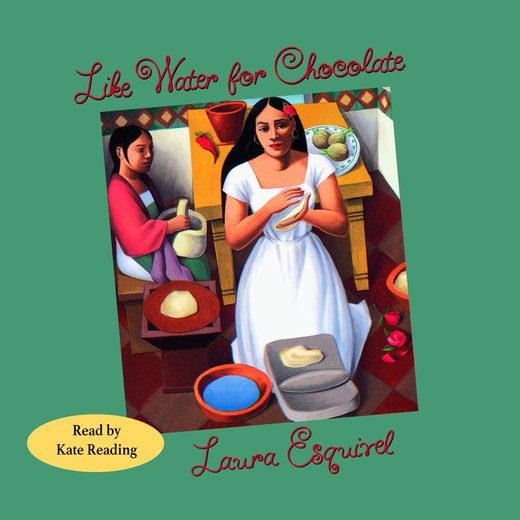 memade rolls. Hard rolls can easily be obtained from a bakery, but they should be small; the larger ones are unsuited for this recipe. After filling the rolls, bake for ten minutes and serve hot. For best results, leave the rolls out overnight, wrapped in a cloth, so that the grease from the sausage soaks into the bread.  When Tita was finishing wrapping the next day’s rolls, Mama Elena came into the kitchen and informed them that she had agreed to Pedro’s marriage—to Rosaura.  Hearing Chencha’s story confirmed, Tita felt her body fill with a wintry chill: in one sharp, quick blast she was so cold and dry her cheeks burned and turned red, red as the apples beside her. That overpowering chill lasted a long time, and she could find no respite, not even when Nacha told her what she had overheard as she escorted don Pascual Muzquiz and his son to the ranch’s gate. Nacha followed them, walking as quietly as she could in order to hear the conversation between father and son. Don Pascual and Pedro were walking slowly, speaking in low, controlled, angry voices.  “Why did you do that, Pedro? It will look ridiculous, your agreeing to marry Rosaura. What happened to the eternal love you swore to Tita? Aren’t you going to keep that vow?”  “Of course I’ll keep it. When you’re told there’s no way you can marry the woman you love and your only hope of being near her is to marry her sister, wouldn’t you do the same?”  Nacha didn’t manage to hear the answer; Pulque, the ranch dog, went running by, barking at a rabbit he mistook for a cat.  “So you intend to marry without love?”  “No, Papa, I am going to marry with a great love for Tita that will never die.”  Their voices grew less and less audible, drowned out by the crackling of dried leaves beneath their feet. How strange that Nacha, who was quite hard of hearing by that time, should have claimed to have heard this conversation. Still, Tita thanked Nacha for telling her—but that did not alter the icy feelings she began to have for Pedro. It is said that the deaf can’t hear but can understand. Perhaps Nacha only heard what everyone else was afraid to say. Tita could not get to sleep that night; she could not find the words for what she was feeling. How unfortunate that black holes in space had not yet been discovered, for then she might have understood the black hole in the center of her chest, infinite coldness flowing through it.