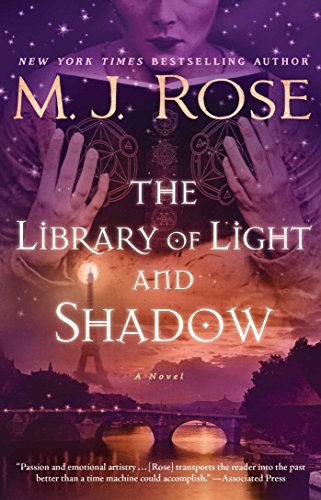 In this riveting and richly drawn novel from “one of the master storytellers of historical fiction” ( New York Times bestselling author Beatriz Williams), a talented young artist flees New York for the South of France after one of her scandalous drawings reveals a dark secret—and triggers a terribly tragedy. In the wake of the Great War, the glamour of 1925 Manhattan shines like a beacon for high society, desperate to keep their gaze firmly fixed to the future. But Delphine Duplessi sees more than most. At a time in her career when she could easily be unknown and penniless, she has gained notoriety for her stunning shadow portraits that frequently expose her subjects’ most scandalous secrets. Then, on a snowy night in a penthouse high above Fifth Avenue, Delphine’s mystical talent leads to a tragedy between two brothers. Devastated and disconsolate, Delphine renounces her gift and returns to her old life in the South of France where Picasso, Matisse, and the Fitzgeralds are living. There, Delphine is thrust into recapturing the past. First by her charismatic twin brother and business manager, Sebastian, who attempts to cajole her back into work and into codependence, then by the world famous opera singer Emma Calvé, who is obsessed with the writings of the fourteenth-century alchemist Nicolas Flamel. And finally by her ex-lover Mathieu, who is determined to lure her back into his arms, unaware of the danger that led Delphine to flee him five years before. Trapped in an ancient chateau where hidden knowledge lurks in the shadows, Delphine questions everything and everyone she loves the most—her art, her magick, her family, and Mathieu—in an effort to see them as the gifts they are. Only there can she shed her fear of loving and living with her eyes open.

The Library of Light and Shadow


Silk lined the blindfold. Deep maroon in color, so dark, like dried blood. Magenta mixed with black if I were to create it on my palette. As I slipped it over my face, I felt the smooth fabric caress my cheeks, cool and delicious.

I recognized a familiar and particular combination of feelings well up in me: expectation, excitement, and the thrill of fear. Guilt that I was peeking in on what was not my right to see and bliss at giving in to the irresistible temptation to look deeper despite a potentially dangerous outcome.

With the blindfold on, I felt more at home in the world than at any other time. Except when Mathieu held me in his arms. But those days were long past, and my life was so different now that I often wondered if my brief time with him was real or imagined.

Adjusting the elastic wrapped around my head, positioning the blindfold just the right way, I saw only darkness. Not a sliver of light invaded its black.

Around me the sounds of the party faded. In the silver and black living room high above Central Park, the guests were still laughing and talking, drinking champagne, admiring their reflections shimmering in the huge round mirror over the fireplace.

But I had left the pleasures and attractions of the party and slipped inside a shell. Cocooned, I focused on sounds of rolling waves. Memories dredged from the beach in Cannes where I grew up. The sea echoes relaxed me, lulled me . . . I let go of the tensions of the actual world, opened to the magic. I became receptive.

“Delphine, aren’t you ever going to draw me?” The impatient whine from the slightly drunk partygoer splashed into my thoughts like a rock thrown into that blue-green water.

I reacted to her entreaty more slowly than usual. I never drank when I was drawing, but that night, for some reason, I’d felt nervous and had a bit of champagne. The good French stuff, smuggled into America so that all these bright young things could drink it out of wide-mouthed glasses imported—just like the wine—from my home country. Fine Baccarat or Lalique you could crush by holding too tightly. Crystal picking up the lights and sending rainbow flickers onto the walls and the men’s starched white shirts and the women’s beaded gowns. With my blindfold on, all was possible, and if I listened hard enough, I could even hear the effervescence in that champagne bubbling to the surface.

Breaking the law was never as much fun as it was in 1925, in this other city of lights, New York. Everyone who had lived through the Great War was still running away from its horrors. Trying to forget. Skyscrapers rose overnight, changing the landscape, dreamed up from the minds of architects determined to prove that tomorrow held promise. Painters, sculptors, furniture designers embraced the rounded lines and geometric cleanliness of Art Deco in their effort to give the world order. Lovers threw out all rules of propriety. Having affairs became as acceptable as indulging in bonbons. Seduced by the allure of motoring trips, we all took off in sleek, elegant cars that shone in the sun like jewels as we tried to outrace the past. Everyone, it seemed, smoked opium or marijuana at soirees that never really ended. All of us were desperate to believe that the future could be as bright as the moon, which we watched fade in the sky while we kept partying—gay and delighted and sad and lost.

Between the fingers of my right hand, I held the silver pencil that my father had given me on my sixteenth birthday, warming the precious metal. I could feel my name, Delphine Duplessi, engraved in script on the barrel.

Reaching out with my left hand, my fingers felt for the edge of the smooth paper. I had my boundary and began to draw. The air around me grew cooler and swirled like a vortex, as if I were caught in an unrelenting current, the way it sometimes did. A harbinger of disaster. I wanted to stop, but once I’d begun a session, I wasn’t capable of ending it prematurely.

Sittings for full shadow portraits, as I called them, took place over several days at the Tenth Street studios where William Merritt Chase had once had his own studio and I now had mine. This sketch was merely a party favor. An amuse-bouche of what I could do. A live advertisement for more work. I took every commission my brother Sebastian arranged for me, but it was difficult for him to manage my career from across the ocean in France. I needed to supplement my income.

The new year promised to be my best ever. I was becoming wildly popular. When I worked, I wore a uniform of a simple white smock over a dark skirt, but at parties I had the appearance of a chic guest—dressed in the fashionable slim shift that hit just above the knees with feathers and fringe, bejeweled in the bespoke pieces my sister Opaline created for me. I spoke with a French accent and provided just the kind of entertainment the city’s avant-garde hostesses craved. It was only February, and I was booked through May.

That cold night, with the guests partying on around me, my hand moved quickly as I filled the page with the image developing in the deepest recesses of my mind. The process, a mystery even to me, involved only two steps.

First, for a period of about three minutes, I studied the sitter’s face, noticing its planes and curves, lines and contours. I didn’t search. Didn’t question. Didn’t engage in conversation. I just observed. Usually, my sitter squirmed a little after the first ten or twenty seconds. Most people are unaccustomed to being specimens. My staring was often uncomfortable for them. Only Tommy Prout, the man I was engaged to, had enjoyed it, but he’d been flirting. And he—unlike anyone I’d ever met—had no shadow secrets. Not one. Probably what attracted me to him. That and his love of art. His parents were collectors, and he treated me like one of the masterpieces that graced the walls of their Beekman Place mansion. I, foolishly, thought that would be enough.

During a session, once I burned the sitter’s face into my mind, I would slip on my blindfold, shut out the noise of the party, and concentrate on hearing the sounds of the sea stored in my memory. And then, listening to the waves pound the shore, I would start to draw, letting my imagination take over. It is easier to describe it thus, but in fact it was my second sight that took over.

Because, you see, I was not just an artist. I was a woman who had been blinded as a child and whose sight had been brought back by magick. And in the process, I had been given a gift—or, depending on your point of view, a curse. I had the ability not just to see people for who they were but also to see the secrets they harbored. The darkest, most hidden desires of their souls.

And like a thief, I plucked those images from their hearts and turned them into a parlor game. Surrealistic caricatures they could take home and frame. Or burn. And therein lay the source of my compassion, my sorrow, and my own ruination.