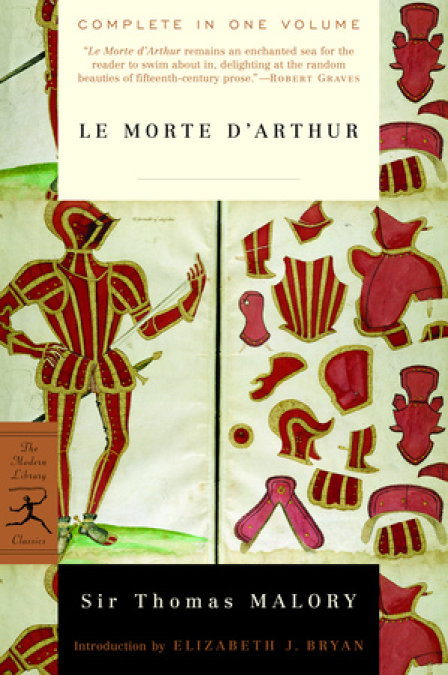 "Le Morte d’Arthur" tells the story of King Arthur and the Knights of the Round Table. The tale begins with Arthur’s birth, his education, and his rise to the throne. It also recounts the tragic love story of Sir Lancelot and Guinevere, the destruction of the Round Table and Arthur’s mysterious disappearance or death. 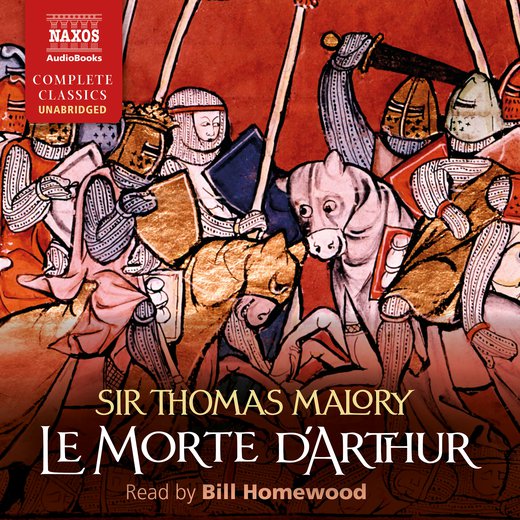 How Uther Pendragon sent for the duke of Cornwall and Igraine his wife, and of their departing suddenly again.

IT befell in the days of Uther Pendragon, when he was king of all England, and so reigned, that there was a mighty duke in Cornwall that held war against him long time. And the duke was called the Duke of Tintagil. And so by means King Uther sent for this duke, charging him to bring his wife with him, for she was called a fair lady, and a passing wise, and her name was called Igraine.

So when the duke and his wife were come unto the king, by the means of great lords they were accorded both. The king liked and loved this lady well, and he made them great cheer out of measure, and desired to have lain by her. But she was a passing good woman, and would not assent unto the king. And then she told the duke her husband, and said, I suppose that we were sent for that I should be dishonoured; wherefore, husband, I counsel you, that we depart from hence suddenly, that we may ride all night unto our own castle. And in like wise as she said so they departed, that neither the king nor none of his council were ware of their departing. All so soon as King Uther knew of their departing so suddenly, he was wonderly wroth. Then he called to him his privy council, and told them of the sudden departing of the duke and his wife.

Then they advised the king to send for the duke and his wife by a great charge; and if he will not come at your summons, then may ye do your best, then have ye cause to make mighty war upon him. So that was done, and the messengers had their answers; and that was this shortly, that neither he nor his wife would not come at him.

Then was the king wonderly wroth. And then the king sent him plain word again, and bade him be ready and stuff him and garnish him, for within forty days he would fetch him out of the biggest castle that he hath.

When the duke had this warning, anon he went and furnished and garnished two strong castles of his, of the which the one hight Tintagil, and the other castle hight Terrabil. So his wife Dame Igraine he put in the castle of Tintagil, and himself he put in the castle of Terrabil, the which had many issues and posterns out. Then in all haste came Uther with a great host, and laid a siege about the castle of Terrabil. And there he pight many pavilions, and there was great war made on both parties, and much people slain. Then for pure anger and for great love of fair Igraine the king Uther fell sick. So came to the king Uther Sir Ulfius, a noble knight, and asked the king why he was sick. I shall tell thee, said the king, I am sick for anger and for love of fair Igraine, that I may not be whole. Well, my lord, said Sir Ulfius, I shall seek Merlin, and he shall do you remedy, that your heart shall be pleased. So Ulfius departed, and by adventure he met Merlin in a beggar's array, and there Merlin asked Ulfius whom he sought. And he said he had little ado to tell him. Well, said Merlin, I know whom thou seekest, for thou seekest Merlin; therefore seek no farther, for I am he; and if King Uther will well reward me, and be sworn unto me to fulfil my desire, that shall be his honour and profit more than mine; for I shall cause him to have all his desire. All this will I undertake, said Ulfius, that there shall be nothing reasonable but thou shalt have thy desire. Well, said Merlin, he shall have his intent and desire. And therefore, said Merlin, ride on your way, for I will not be long behind.

How Uther Pendragon made war on the duke of Cornwall, and how by the mean of Merlin he lay by the duchess and gat Arthur.

THEN Ulfius was glad, and rode on more than a pace till that he came to King Uther Pendragon, and told him he had met with Merlin. Where is he? said the king. Sir, said Ulfius, he will not dwell long. Therewithal Ulfius was ware where Merlin stood at the porch of the pavilion's door. And then Merlin was bound to come to the king. When King Uther saw him, he said he was welcome. Sir, said Merlin, I know all your heart every deal; so ye will be sworn unto me as ye be a true king anointed, to fulfil my desire, ye shall have your desire. Then the king was sworn upon the Four Evangelists. Sir, said Merlin, this is my desire: the first night that ye shall lie by Igraine ye shall get a child on her, and when that is born, that it shall be delivered to me for to nourish there as I will have it; for it shall be your worship, and the child's avail, as mickle as the child is worth. I will well, said the king, as thou wilt have it. Now make you ready, said Merlin, this night ye shall lie with Igraine in the castle of Tintagil; and ye shall be like the duke her husband, Ulfius shall be like Sir Brastias, a knight of the duke's, and I will be like a knight that hight Sir Jordanus, a knight of the duke's. But wait ye make not many questions with her nor her men, but say ye are diseased, and so hie you to bed, and rise not on the morn till I come to you, for the castle of Tintagil is but ten miles hence; so this was done as they devised. But the duke of Tintagil espied how the king rode from the siege of Terrabil, and therefore that night he issued out of the castle at a postern for to have distressed the king's host. And so, through his own issue, the duke himself was slain or ever the king came at the castle of Tintagil.

So after the death of the duke, King Uther lay with Igraine more than three hours after his death, and begat on her that night Arthur, and on day came Merlin to the king, and bade him make him ready, and so he kissed the lady Igraine and departed in all haste. But when the lady heard tell of the duke her husband, and by all record he was dead or ever King Uther came to her, then she marvelled who that might be that lay with her in likeness of her lord; so she mourned privily and held her peace. Then all the barons by one assent prayed the king of accord betwixt the lady Igraine and him; the king gave them leave, for fain would he have been accorded with her. So the king put all the trust in Ulfius to entreat between them, so by the entreaty at the last the king and she met together. Now will we do well, said Ulfius, our king is a lusty knight and wifeless, and my lady Igraine is a passing fair lady; it were great joy unto us all, an it might please the king to make her his queen. Unto that they all well accorded and moved it to the king. And anon, like a lusty knight, he assented thereto with good will, and so in all haste they were married in a morning with great mirth and joy.

And King Lot of Lothian and of Orkney then wedded Margawse that was Gawaine's mother, and King Nentres of the land of Garlot wedded Elaine. All this was done at the request of King Uther. And the third sister Morgan le Fay was put to school in a nunnery, and there she learned so much that she was a great clerk of necromancy. And after she was wedded to King Uriens of the land of Gore, that was Sir Ewain's le Blanchemain's father.