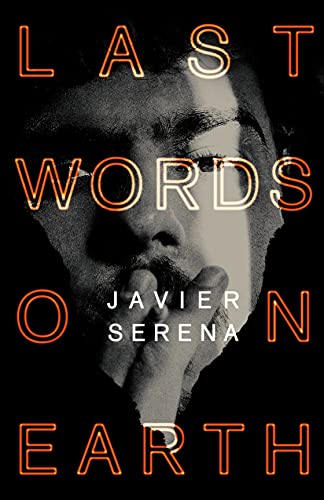 In exile from his home country of Peru, Ricardo Funes embodies the ultimate starving artist. Fired from almost every job he's held—usually for paying more attention to literature than work—he sets himself up in a rundown shack where he works on writing stories to enter in regional contests across Spain, and foisting his judgements about literature on anyone who will listen as one of the last remaining members of the "negacionismo" poetry movement. Completely dedicated to an unwavering belief in his own art, Funes struggles in anonymity until he achieves unbridled success with The Aztec and becomes a legend . . . at least for a moment. Diagnosed with lung cancer a few years later, Funes will only be able to enjoy his newfound attention for a short time.

Told through the voices of Funes's best friend, his wife, and himself, Last Words on Earth looks at the price—and haphazard nature—of fame through the lens of a Bolaño-esque writer who persevered just long enough to be transformed out of obscurity into being a literary legend right at the end of his life.

Eventually, the professor redirected the conversation toward more exotic subjects: he asked Funes to tell me about negacionismo, a poetic movement Funes had apparently founded as an adolescent in Mexico, where he went into exile during the Peruvian dictatorship. The movement’s literary tendencies embraced a puzzling appetite for rebellion: Funes claimed to have sabotaged readings given by the most renowned poets of the day and published irreverent pamphlets railing against the dominant national canon.

Funes drained his black coffee in a single swallow and lit a second cigarette using the first; behind his thin lips, I noted the teeth destroyed by lack of oral hygiene and many years of dental neglect. As he started to speak, his eyes shone. He was abidingly proud of his turbulent teenage years.

He spoke enthusiastically about the magazines he published with his handful of co-conspirators, and evoked the years that immediately preceded his departure for Barcelona: vibrant days of his youth in Mexico City, an adolescence in which he must have felt that the city streets had been paved expressly for him to roam at dawn with his silhouette shining nobly, unstained by disappointment; a time when he yearned to wield language as a tool for destroying all the barriers built with apathy and all the traditions he wanted to shatter.

By then, the room was filled with smoke—tobacco smoke and the turgidity from the conversation, which had become a monologue, replete with names of streets and old Mexican associates and obscure books of poetry. While outside the rain fell with increasing force, inside intimacy reigned, accentuated by the sound of the raindrops pattering on the metal roof.

Funes waxed poetic about his minor feats, reminiscing about his years of excess and even alluding to the punishments meted out when a member crossed over to the ranks of the powerful, punishments that called to mind the rituals of masonic sects or other insurgent cabals. After a brief pause, he reached for a knife stuck through a newspaper clipping into the wall, pulled the weapon out, and viciously stabbed the same piece of paper again.

“Traitor! Sold. For a chair and an office.” He explained that the figures in the photo were an old negacionista comrade and a powerful literary critic, one who had apparently taken the poet under his protection for some future gain.

Between threats directed at the man in the picture, Funes detailed the scope of the knife-pierced individual’s unforgivable sin: that of putting his own future before his loyalty to the group, of abandoning his tribe of aspiring-poet friends who read each other’s scrawled verses, all in exchange for an institutional fellowship, or inclusion in some anthology. There was no graver offense in Ricardo Funes’s mind, as I would observe over and again throughout the years. He clung to that peculiar poetic cause sparked in the Americas and protected its distant flame like it was his only source of warmth, the final thread connecting him to his origins.

Present in those accounts was his closest friend from his Mexico days, Domingo Pasquiano, whom I would never have the chance to meet, although Funes would speak of him so often over the years that the stranger would become dear to me. “The world’s greatest poet,” Funes said in a hyperbolic claim, reiterating Pasquiano’s genius as he glared at the picture from the paper.

Then, Funes went on to pay further homage to his friend Pasquiano, with us as audience. In my view, it was his way of telling me who he was, and who I would be dealing with. As the rain intensified on the flimsy metal roof, Funes took an envelope from his pocket, an unopened letter with a noble-looking red wax seal, a replica of a love letter of yore, and soberly revealed that the envelope held Domingo Pasquiano’s latest poem.

“From April,” he said, slitting the seal with a dirty knife and showing us a page of type-written lines. He held them in such a way that suggested they contained sacred verse.

Funes then leapt to his feet, exalted. My friend and I were left at the table, dumbstruck and motionless in our seats, as his cigarette burned away in the ashtray, the thread of smoke rising in a thin, perfect column. We watched him descend the front steps onto the lawn and come to a stop several meters from the house. Our view was framed by the open door: we could see the clothes out on the line and the two dark grooves of the lane leading to the house amid the green expanse of patchy grass and weeds left to grow knee-high, and farther out the trees and turbulent gray sky that steeped the afternoon in premature darkness. Had lightning flashed in the background, we might have been observing an El Greco painting; and yet the scene before us was actually a serene one, more apt for private confession than that sort of mystical or tragic excess. And yet we were witnessing a miracle, the miracle of Funes’s surrender to the dream born in the dusty streets of Mexico City and the miracle of his unbreakable friendship with Pasquiano and the miracle of the vernal oaths he’d sworn as a young Negationist poet, vows he bore as if they had been branded with fire on his chest and to which he remained loyal, despite distance and the passing years.

“A single copy, one reading ere the flames: that’s what Pasquiano’s poems are for,” Funes said suddenly, addressing us through the doorway, grateful that, for once, his friend’s work would enjoy a small audience before falling into eternal silence. That was the purpose of the correspondence they kept up for many years, despite the Atlantic Ocean and thousands of kilometers between them: a text written for one ephemeral reading, a ceremony celebrated in a distant country in the strangeness of the afternoon, no pretense of permanence, no expectation for how the lines might resonate. What seemed to matter to Pasquiano, the only way he deemed his message heard, was knowing that somewhere, someone fervently read his words for a brief moment in time.

Funes performed his ritual and I considered what kind of madman we had met deep in the woods. He held himself with the gravitas befitting a liturgy: his sandaled feet were planted firmly in the mud, hair plastered with rain, and, through the wet shirt, his skin had taken on an amphibious quality, a hybrid texture. The dog barked as she leapt around him, and we strained to hear the beginning of Pasquiano’s verses.

The poem was short, no longer than a minute or two, but it was raining hard and the paper disintegrated so rapidly that Funes barely had time to finish reading it. When the page was a crumbled mess in his hands, the only copy of the poem gone forever, he looked up at us, as if some type of consecration had taken place.

Funes let the pieces fall to the ground, untroubled when the dog trampled the inert page. I studied the perfect tube of ash the cigarette had become.