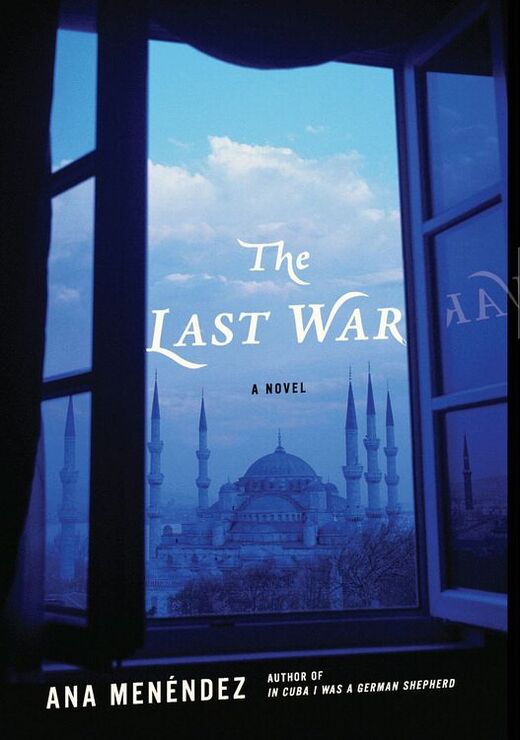 “[A] potent literary novel . . . A deft portrait of an estranged couple whose pain is veiled by the fog of war.” —People

A breathtaking novel of love, war, and betrayal from the critically acclaimed author of Loving Che and the New York Times Notable Book, In Cuba I Was a German Shepherd. From the battlefields of Afghanistan and Iraq to the strange, shimmering streets of Istanbul, The Last War is a “seductive meditation” (O, The Oprah Magazine) on cruelty and violence, love and identity from Pushcart Prize-winning author Ana Menéndez.

In Istanbul that summer the mornings were very still, and I could sometimes hear a boy’s faint voice calling out in the dark. I was waking before sunrise from nights that seemed impossibly long, and rather than linger in bed I often took my coffee out to the terrace and sat looking at the lights that shifted and dimmed on the far shore. Whether because of the watery world and the constant lapping of the Bosporus or because of my state of mind at the time, most everything those days seemed tinged with a liquid mutability. The boy’s voice, calling through the fog, was the only solid thing, a vessel that gave equal shape to hope and sorrow. Every morning the boy called out his impossible promises, and every morning I guessed at the meaning of the words I couldn’t understand: Fresh greens delivered to your door. Sweet berries for your love. Herbs to ease your pains.

Two months earlier, my husband had left to cover the war in Iraq. I remained in Istanbul, telling friends I was waiting for my accreditation papers to come through. This wasn’t really a lie: though I shot almost exclusively for Brando’s paper now, I was still considered a freelancer and, of course, had to arrange everything for myself. But the deeper truth, of which I was only dimly aware, was that something essential had

begun to give way in my marriage. And though I could not describe it exactly, I could sense it most at night when, with eyes closed and still caught inside a dream, I understood that the disillusion we had so long been running from had finally come for us.

We were the war junkies: Eros and Chaos, endlessly drawn to the ragged margins where other people hated and died. It was as if we believed constant movement would deliver us finally from the disappointments of an ordinary life. For years, it seemed true enough. He was a writer, I was a photographer, and from war to war, we made a team.

We had met in the run-down suburban bureau of a midsize paper in a midsize town with pretensions of big-city glory. I hated him instantly: he was a pretty boy who, I suspected, slept in his white button-downs from Brooks Brothers. If I caught him looking at me as I made my way to the darkroom, I turned away. If he stepped in front of me, I moved aside. Then one night we rode out to an assignment together—a shooting at a downtown liquor store. On the way back, he told me he’d gone to Cambridge and was going to be a war correspondent. He was not yet thirty years old. I sat next to him in the front, resting a camera on my lap. At a light, he pointed to the almost full moon above us. Then he turned to me and recited the first lines of “Dover Beach.” I stared at him until he asked if I knew Matthew Arnold. Not sure, I said—where does he sit? It was the beginning of our private joke. Matthew Arnold:

journalist and poet. We decided later that he would have been back in features, brooding and ironic. Or maybe working as a crazed copy editor on the rim, always complaining about not having time for his “writing.”

The tide is full, the moon lies fair upon the straits. Brando was still in his striped tie, but the white button-down was wrinkled and damp. “He knew war,” Brando said. “And he knew it was neither glorious nor sordid, just us.” I watched his face, crisscrossed by streetlamps, as we drove back to the newsroom through the empty streets. There was more to the prepster than I had thought. Something sweetly dangerous, as if violence were really a way to protect the fragile self. There were other men, other loves, but even to the end, even when everything was lost, I never tired of Brando. He was the always fascinating mystery that I was to myself.

At our wedding, he insisted, over my mother’s objections, on reciting the poem. Such a gloomy poem for a wedding, my mother said sadly. But I heard in it then only the lilting raw truth of things. Ah, love, let us be true to one another! For the world, which seems to lie before us like a land of dreams, so various, so beautiful, so new, hath really neither joy, nor love, nor light, nor certitude, nor peace, nor help for pain…Platitudes to the old, perhaps; but shivering revelation to me at twenty-three, and nothing I could ever forget. I was young and sheltered, as ignorant of life as I was of writers and writ ing. I understand now that the poem shaped me by shaping the world I was only then getting

to know. Some kinds of art can do that. And Brando had initiated me. Brando, who was everything my gray and traumatized parents were not.

We had some good years, more than is decent to wish for. We saw the world together, two tough-acting innocents on leave from what they might have been. In Rome, it was cold and we got lost. We stopped in a plaza for directions and bought a bottle of wine and a corkscrew. We arrived at the hotel many hours later, but happy. That night, I washed my sweater in the bathroom sink and hung it out on the balcony railing. There was a full moon, and I lay in bed with my arm around Wonderboy’s back as my sweater moved in the breeze and the moon illuminated the balcony, the bed, all the city, and us in it.

In France, he insisted we stop at every provincial square so that I could take a photo of him next to the monument to fallen soldiers. He stood straight and proud next to all that stained history.

The years passed. In Sri Lanka, we lay beneath mosquito netting for the first time and listened to bombs falling in the distance. When I slipped out of bed to shoot from the window, he yelled: It’s dangerous! In Kargil, the crashing was a little closer, the road that took us there more perilous. At night, the hotel windows rattled from the concussions. In Kashmir, for the first time, he said the sound of shelling just over the hills sounded beautiful, like summer. In Afghanistan, we traveled together to an execution where young boys ran

up and down the bleachers selling fruit juice and cakes. The Talibs handed a shotgun to the victim’s brother, who shot wildly and without effect until someone had to come and help him finish what he probably had never meant to start.

So it went after the brief European honeymoon: wars and more wars, mass graves, suicide bombings—our great conjugal tour of all that was wrong and broken in us. Everywhere we went, Wonderboy did all the work, made all the travel arrangements, secured the hotels and the translators, and I came along at the end of it, his shooter. It was always freelance work; the papers he worked for then acted as if they were doing us a favor, allowing their boy wonder to travel with the wife. After a few years, I had a chance to join a paper on the West Coast. The photos from the first Kashmir trip had enjoyed modest praise. But when I broached it with Wonderboy, he stood very still, his hands by his side, the great bulk of him unmovable, as if he were physically blocking me. He said it was up to me. In the end, I turned them down, but the first crack had formed. A few months later we were living in Delhi when India tested its first nuclear bomb. It was the summer of 1998, and the opening thunderclap of our endless war.

Brando Price Phillips. His mother, a film fanatic to the end, had named him after Marlon Brando. Wonderboy hated the name and had a habit of not responding to it until eventually someone called him by something else, usually Phillips or Phil or—a favorite of the jokester newsroom photographers—Phyllis. A few of us took to calling him Wonderboy after an assistant state attorney called the office asking for him and, forgetting his name, referred to him as “that boy wonder you have there, the blond one.” And the funny thing is, he did look like a young Brando, handsome, broad-shouldered, manly, and straightforward in an age when such charms were fast going out of fashion. He had a demeanor that invited pet names: serious, but always on the edge of a smile. The prepster look, I came to learn, was an act, a way to hold people at a safe distance. With time, I learned why he met life with a gentle snobbery. For the beautiful, the world is already too close, too familiar, too eager to simulate intimacy. In fact, Wonderboy came from a once-comfortable family. But his parents divorced young, with two small children, and Brando grew up in the Florida Panhandle, where his mother managed a small hotel. He paid his own way to Cambridge, where he picked up the uniform of white button-downs and rep tie that he would wear for the rest of his life.